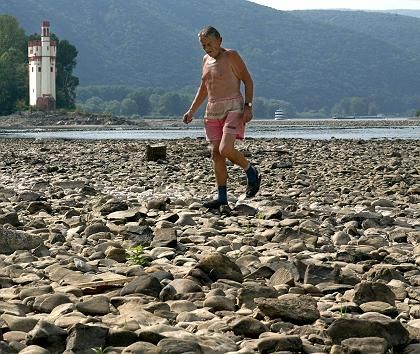 The August 2003 heat wave lowered the water level on the Rhine River to the point that traffic on one of Europe's most-important shipping channels was severely hindered.

Heat shows no mercy. During the first two weeks of August 2003, between 22,000 and 35,000 more people died than would normally be expected in Europe. In France, where the greatest number of elderly died -- many patients in rest homes and other care centers -- the death rate rose by an astounding 54 percent. Estimates in Germany put the number of dead at around 7,000. The summer of 2003 was likely the hottest since 1500, researchers wrote in a report published last week in the science weekly Nature.

"Measured by the number of deaths, it was the biggest European natural disaster of the past 500 years," Gerd Jendritzky of the German Weather Service in Freiburg said.

Was this a man-made disaster? The new research provides the strongest evidence yet that it was. The study concluded there is 90 percent chance that the deadly heat wave of 2003 was no random event, but rather a disaster at least half caused by climate change created by humans, British researchers wrote in the magazine. Their calculation models found that pollution caused by greenhouse gases and other pollutants have more than doubled the risk of extreme heat waves.

Admittedly, it is impossible to create a direct link between human influences and the 2003 heat wave, conceded Peter Stott of the Hadley Center for Climate Prediction at Research at the University of Reading in England, who conducted the research with D.A. Stone and M.R. Allen of Oxford University. But analysis of climate data stretching back to 1851 provided strong evidence that human effects on nature have drastically increased average temperatures and, consequently, the danger of extreme heat waves.

The German Weather Service's Jendritzky, who penned an article accompanying the Nature report, vouched for the scientific integrity of Stott's research. He said the British researchers had correctly examined the natural climate fluctuations in Europe. The results, he said, jibe with numerous earlier investigations which, taken together, provide compelling evidence that the global climate changes of the past 30 to 50 years can only be explained by a considerable amount of human influence. "In Europe, heat waves will happen more frequently and they will be more extreme," Jendritzky told SPIEGEL ONLINE.

Of course, there are still considerable uncertainties in estimates of natural temperature fluctuations. "Nevertheless, the work of Stott and his colleagues is a breakthrough," the climate researcher said. "This is the first successful attempt to grasp human influence on a specific climate event."

Still, Jendritzky is uncertain whether studies of this type will influence international policies in the future. "In the case of the hole in the ozone layer the international community reacted quickly and reduced CFC emissions," he said. "Something like that also needs to happen with relation to the climate, but it would be a much bigger intrusion on our lifestyles." Countering climate change, he warned, is going to require a lot more than changing the active ingredient in hairspray or the coolant in freezers and air-conditioners.

Can money make a difference?

Moral appeals may fail in the end, but when climate change hits pocketbooks, it may cause some to reconsider their climate change policies. The financial consequences of the 2003 heat wave were considerable -- and not just in Europe. Jendritzky and Christoph Schaer of the Institute for Atmospheric and Climate Science in Zurich said reinsurers have calculated that more than $12.3 billion worth of uninsured crops were destroyed globally by the heat wave. The possible record-setting damages from this summer's wave of hurricanes in the Southeast will also dig deep into the budget of the US, which continues today, just as stubbornly as before, to refuse to ratify the Kyoto Protocol on climate protection.

Future studies that attribute climate catastrophes to specific causes "could deeply influence the course of international negotiations," Jendritzky and Schaer write. Because in the future, explanations won't just be demanded for how to limit the consequences of climate change and how to adapt to those changes. It will also be a question of "how we pay for them."