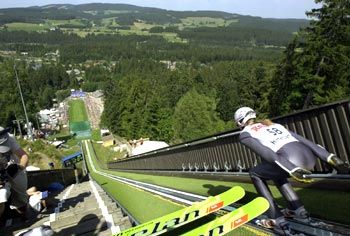 Skiing without snow: Coming soon to a mountain near you warn UN experts.

For the moment, life couldn't be better in the Alps. Resorts glisten with snow and with rosy-cheeked skiiers anxious to hit the freshly fallen powder that magically seems to keep coming. Enjoy it now, scientists say, because this image of a winter wonderland may soon be but a distant memory.

The truth is, stunning, snow-capped Alps and their accompanying glitzy ski resorts (Austria's Kitzbuhel, Germany's Garmisch-Partenkirchen and Italy's Cortina, the latter two former Olympic sites) are losing their snow. In fact, winters in mountainous regions across Europe are getting warmer and shorter. The result will be catastrophic for the winter sport industry. Already, experts say, a number of the lower-lying ski areas -- especially those below the 1,000 meter (3,280 feet) mark -- are endangered and can no longer rely on regular winter snowfall. And a much-cited United Nations report indicates that the level at which one can reliably expect snow may rise to as high as 1,800 meters (almost 6,000 feet) in the next few decades. 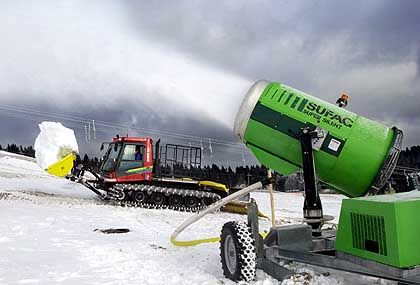 Hundreds of ski areas in Europe are investing in snow canons to extend their shrinking ski seasons.

"We have seen that in the last years and decades that winters have become much milder than before and that there isn't nearly as much snowfall," says Mojib Latif, a climate researcher at the Leibnitz Institute for Oceanography at the University of Kiel in northern Germany. "All simulations show this trend will continue in the future and that we have to expect an intense warming in the Alps. Short term, where climate change is more erratic, there will continue to be big snowfalls. But in the long-term we can say that, especially in the foothills, snow will turn to rain and winter sports will no longer be possible anymore."

Already, a number of ski areas and mountainous regions in Germany have noticed the disturbing trend. In the Black Forest, once a thriving winter sport region, a number of ski areas like Kirchberg -- located at 850 meters (2,790 feet) -- have already been severely hampered by a lack of snow, and many lifts have been forced to close down. In the Erz Mountains in Eastern Germany just north of the Czech Republic -- a region with both downhill and cross country skiing -- lack of predictable snowfall has likewise become a problem.

"It's no longer how it used to be in the 1970s when it snowed all the way through from November to March," says Helga Wohlgemuth, head of the Erz Mountains tourism organization. "There are now years where there isn't even snow into January and we also have periods of warming in the middle of winter that melts what snow we do have."

That the warming trend in Europe is caused by man-made global warming is something most in Europe no longer question. And with temperature rises on the continent much higher than the average global rise of 0.6 degrees Celsius over the last century (0.9 degrees Celsius in Germany, 1.1 degrees in Austria and fully 1.4 degrees in Switzerland, the German Weather Service reports), people here are rapidly beginning to notice. The year 2003 saw a blazing hot summer that set heat records across Europe including a number of measurements over 40 degrees Celsius (105 degrees Fahrenheit). But it was just one in a series of hot years. Before 2003 rolled around, the summer of 2000 had been the hottest in Europe since 1761. Globally, the three warmest summers since the introduction of systematic measurements around the world in 1856 (Europe has had them longer) have been 1998, 2001 and 2002.

Oddly, many scientists believe that global warming may, in fact, eventually lead to a radical cooling of Europe. Continuing melting of the polar ice caps -- already well under way -- could severely disrupt the Gulf Stream which brings warm water from the South Atlantic to the coasts of Europe thus ensuring relatively mild temperatures on the continent. But while that remains a potential danger on the long-term, the trend for the near future is clear. 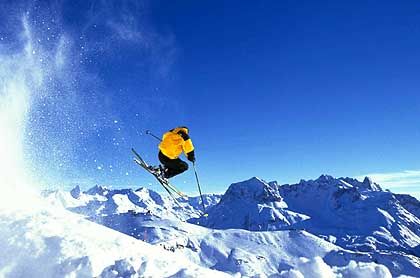 The Alps are world renowned for their ski resorts. Many may be in danger.

Meanwhile, ski resorts in Europe have started doing what they can to battle the inexorable approach of winter warmth. So far, mass deployments of snow canons have been the preferred method. The fake fluff allows lifts to remain open longer, creating tongues of white threading through green, springtime landscapes.

"Snow canons are an absolute must for us," Georg Fahrenschon, head of a ski area in the Bavarian Alps, told the German daily Frankfurter Allgemeine Zeitung earlier this month. "We are completely dependent on having an average of 120 ski days per year. Without artificial snow that wouldn't be possible."

Planning for a snow-less future

Many regions are even beginning to develop strategies to attract tourists for a time in the not-so-distant future when skiing and snowboarding may no longer be possible. The German Ski Association recently started a program called Nordic Active in an effort to promote mountain activities that aren't dependent on large amounts of snow. Nordic walking, Nordic blading (cross-country skiing on wheels) and snowshoeing (which can be enjoyed even in low snow conditions) are all being promoted and already there are 30 Nordic Active centers operating in Germany with many more to come. A program called Alpine Active -- with an emphasis on horseback riding, winter hiking, and such extreme sports alternatives as paragliding -- will soon follow.

But it is in the Black Forest, for decades a winter ski destination for tens of thousands of German families, where planning has really gone into high gear. The region's tourism board is seeking to limit investments in winter recreation to just those resorts that lie above 1,000 meters. In addition, the region has commissioned a study -- to be finished in March this year -- to determine how the region's tourism offerings can be reconfigured to confront a snowless future. 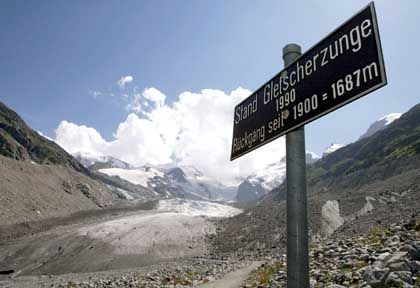 Alpine glaciers are melting rapidly. The sign reads, "Extent of glacier tongue in 1990." The photo was taken in 2003.

"The snow level is clearly rising," says Christopher Krull, who heads the Black Forest Tourism Association. "It is a situation that we have really been noticing lately and it has already had severely negative effects on winter sports in the region. Our study is already showing that that there will be a much worse situation in 20 years. We absolutely have to convert to other forms of tourism because in the winter season there won't be much tourism generated through skiing in the near future."

It's not just the ski industry

The longer term effects of warmer European winters are not just a concern for the winter sports industry. Rapidly melting glaciers in the Alps mean potential drinking water shortages in the future, particularly in Austria, as well as difficulties for hydro-electric power plants. Already, say environmentalists, a huge surge in the number of summer and autumn rockslides has been noted as the Alpine permafrost -- the cement that holds the fragile mountain topsoil together -- melts.

The most direct result for the ski industry will be a continuing pressure to develop at higher altitudes. The problem, observers say, is that there are few places left to develop. An extreme concentration of skiers above 2,000 meters (6,560 feet) is almost unavoidable in the future, no matter how good ski conditions may look this year.

"The bad thing," says climate expert Jurrien Westerhof of Greenpeace in Austria, "is that what we see happening is exactly what was predicted many years ago."