At the recent United Nations summit in Nairobi, ways of limiting global population growth emerged as one of the major topics of discussion. The debate cast a spotlight on the strengthening of women's rights around the world and on vital issues such as poverty, health care and education.

With some of the highest birth rates in the world, Africa has necessarily become a primary focus of the debate. Furthermore, one-fifth of all children in sub-Saharan Africa between the ages of six and 11 don't go to school, a number that rises to one-third for 12- to 14-year-olds. For them, college is out of the question. Can that trend be changed? How can Africa be strengthened?

Around 6,000 kilometers from Nairobi, on the outskirts of Accra in Ghana, a bumpy road pockmarked with knee-deep potholes leads up a hillside. Up on top, behind a metal gate guarded by a trio of watchmen, are the low, light-colored buildings of a university, embedded in the green landscape. From up here, the Ghanaian capital of Accra looks flat and gigantic. No city noises can be heard, and there's no stench to be smelled.

Is this perhaps a place to think deeply about the future of the continent?

That, at least, is what the school wants from its students. Ashesi University aims to educate Africa's future leaders, a school for the next generation of business executives, judges or presidents. And many of those who attend would normally be unable to afford such an education: Half of the more than 2,000 students and graduates from 28 different countries are receiving or have received financial support from the university. And they are not required to pay it back.

The university is different in other ways, too. Half of the students, for example, are women. Furthermore, the courses are designed to teach students how to think on their own, and when it comes time to take a test, no professor is present. The students police themselves to make sure no one cheats.

The founder of the university is Patrick Awuah, Jr., a slim, refined man with a soft voice and reflective conversational style. We spoke in his office.

DER SPIEGEL: Mr. Awuah, your university is among the best in Africa and your focus is on educating the leaders of tomorrow. Why is that important?

Patrick Awuah: When you look at a college classroom today, you are looking at the Africa that will exist 20 years from now. So we need to get to a place where the educational system here matches that of anywhere in the world. The reason so many problems remain is that the people in charge accept those problems or are unable to solve them. Or, in some cases, they are corrupt and are part of the cause of the problem. If you really want to change society for the better, you need to make sure that the people who are creating or influencing the environment - the leaders - care. And you need to make sure they have the capability to actually solve problems.

DER SPIEGEL: And that's not the case at the moment?

Awuah: In this part of the world, actually all over the world, there are leaders who, for example, accept that some people ought to be poor. That's not right. That's why we decided that we were going to engage on the question of leadership. When you have a few good leaders, you end up with tremendously positive outcomes for millions of people.

DER SPIEGEL: One significant problem is population growth. The UN's International Conference on Population and Development recently took place in Nairobi and the focus was on things like strengthening the rights of women and improving education as a way to slow this growth. Why is it so difficult to find a solution?

Awuah: I think you have two sides of the equation. You have people who say: Look, we need to get every kid educated.

Awuah: It's a very good sentiment to have. But there's some unspoken assumptions that people just sort of accept. They accept that if you put a kid in school, then they're going to learn. But it's not necessarily a correct assumption, because you can put a kid in a school where the teachers are not equipped, or where there are no teachers, or where the school environment is so bad that the kid is not going to learn. If the goal is really to get everyone to learn, then it should be tackled completely differently. It shouldn't just be tackled as a question of getting kids into classrooms. You have to invest heavily in teacher education and in the education infrastructure.

Patrick Awuah, Jr., born in Ghana in 1965, is the founder and head of Ashesi University in Accra. The school is considered to be extremely innovative and within a short period of time has established itself as one of the best on the African continent. Awuah went to college in the U.S. and worked for Microsoft before returning to Ghana and opening Ashesi University in March 2002. Since then, he has received several awards for his innovative approach to education.

DER SPIEGEL: On the other hand, it has been proven that birth rates fall as soon as women begin receiving better educations.

Awuah: There's certainly truth to the idea that if you educate more people, you get better outcomes in terms of family planning. But you have to educate both sides, men and women. A 15-year-old boy who wasn't in school and who doesn't have any hope for their future professionally is more susceptible to being recruited into a gang or terrorist group.

DER SPIEGEL: Since your university opened in March 2002, you have been working towards ensuring gender balance. Only recently, however, have you managed to achieve a 50-50 ratio. Why was it so difficult?

Awuah: Our first class was only 25 percent women, and I wondered: How come? It turns out that only about 25 percent of the applicant pool was women, so either there weren't enough women coming out of high school, or somehow we weren't recruiting properly. So we made a concerted effort to actively start recruiting girls and over a two-year period, we went up to 35 percent women. But what really changed it for us was when we started offering university housing.

DER SPIEGEL: How did that help?

Awuah: Students were telling us that they wanted to live closer to campus because it enabled them to work and do group projects more easily in the evenings. But it turns out that once we had university housing, families were more willing to send us their girls. They care about the safety of their daughters. Once we had that, we started to see more applicants from girls.

DER SPIEGEL: Beyond the experience of your university, why is it generally difficult to attain a gender balance at schools in Africa?

Awuah: Going back in history, we were a society that didn't have formal education. It was introduced by the missionaries and colonial governments. And they went to the leadership of all the villages, the chiefs, and said: Give us your boys to send to school. They asked for the boys, not the girls. So you had this structure that was set up, and that's what we have to overcome. I think Ghana is almost there now, but it, too, varies from region to region.

DER SPIEGEL: What other issues must be addressed?

Awuah: Today, there is a significant push for other regions to engage with Africa. China is looking to engage with Africa. The West is looking to engage with Africa. We need to make sure that whatever change happens in Africa is African led and not led from somewhere else. To do that, we need to be educating people on our side of the table who can engage in those conversations and make sure that the best interests of African citizens are front and center. We need to ensure they have a deep understanding of their own circumstances and their own societies in addition to a good understanding of those other cultures. We need to get to a place where the educational system here matches anywhere in the world. The most important natural resource that we have on this continent is the human intellect. It is not gold in the ground or oil under the seabed.

DER SPIEGEL: Do you have the impression that others look down on Africa with a certain amount of arrogance?

Awuah: Yes, of course. When your country has a lower per-capita GDP than another, there is a tendency for others to say: OK, we're wealthier and therefor we must know more than you do.

DER SPIEGEL: You often stand in line with your students in the cafeteria or take part in Mardi Gras celebrations. Where does your participatory leadership style come from?

Awuah: I grew up in Ghana. My first major learning experience about how not to do education was in the first grade. My parents put me in this school where the teachers caned kids for getting the wrong answer. You'd get hit with a stick if you made a mistake and I was almost at the bottom of the class academically. My parents moved me out of that school because one day I got caned so hard that my thumb got bruised. The new school was completely different, and that term, I was almost at the top of the class. The same kid, a completely different environment and a completely different result. So, the way you engage children is important. Children want to learn. I haven't met a child who doesn't want to learn. As a teacher, you're here to support them in that quest.

DER SPIEGEL: What do you view as the most important quest?

Awuah: Deciding what kind of society we should have. The one thing we do differently is we don't preach to people. We engage them in a conversation. And if they really debate it intellectually, they will come to the conclusion that a high-trust society is better than a low-trust society. If they have the belief that they can, together, build that high-trust society, then they'll go do it, because they've determined it's a better way. It's not because someone is preaching at them. 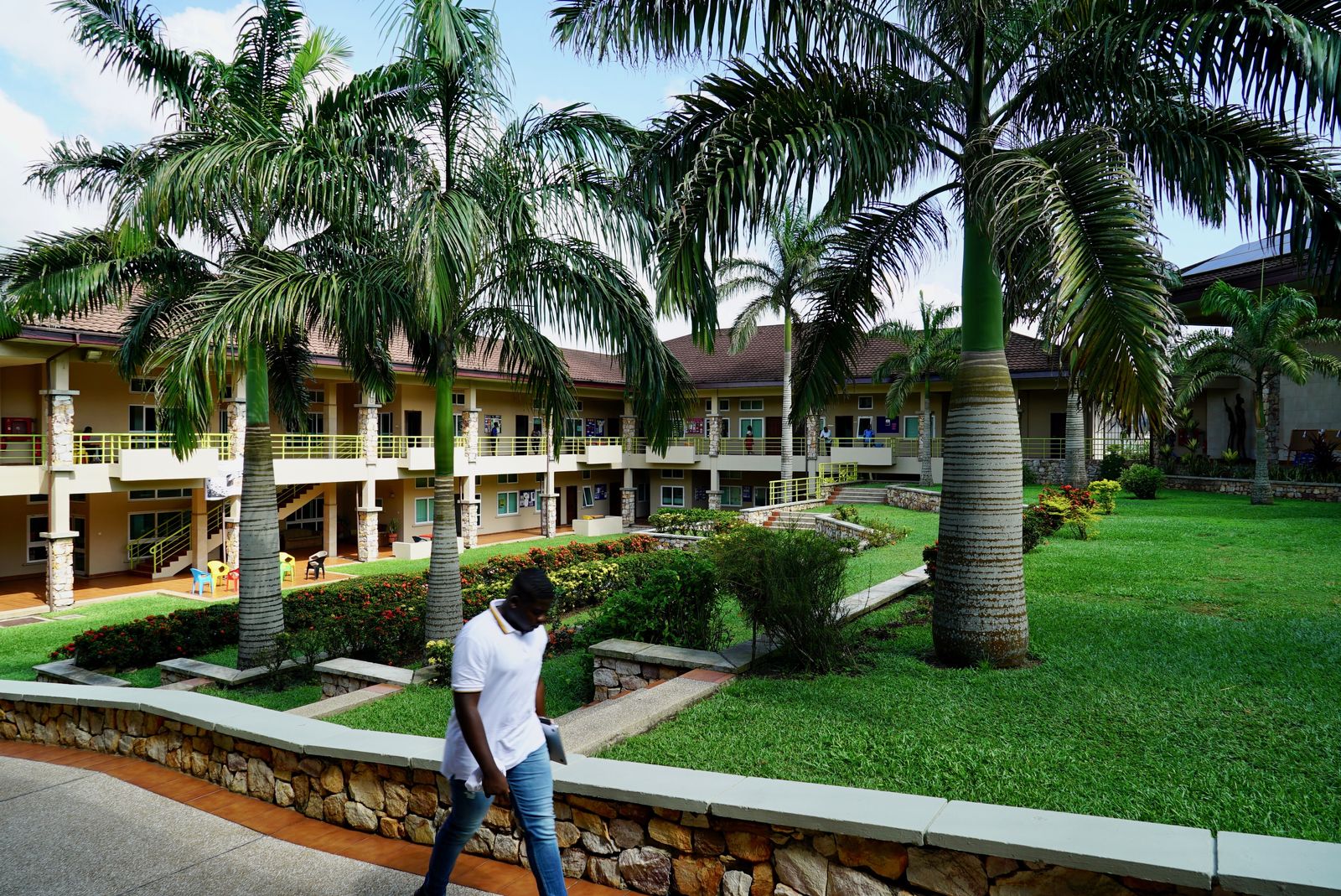 Ashesi University is among the best institutions of higher learning in Africa. 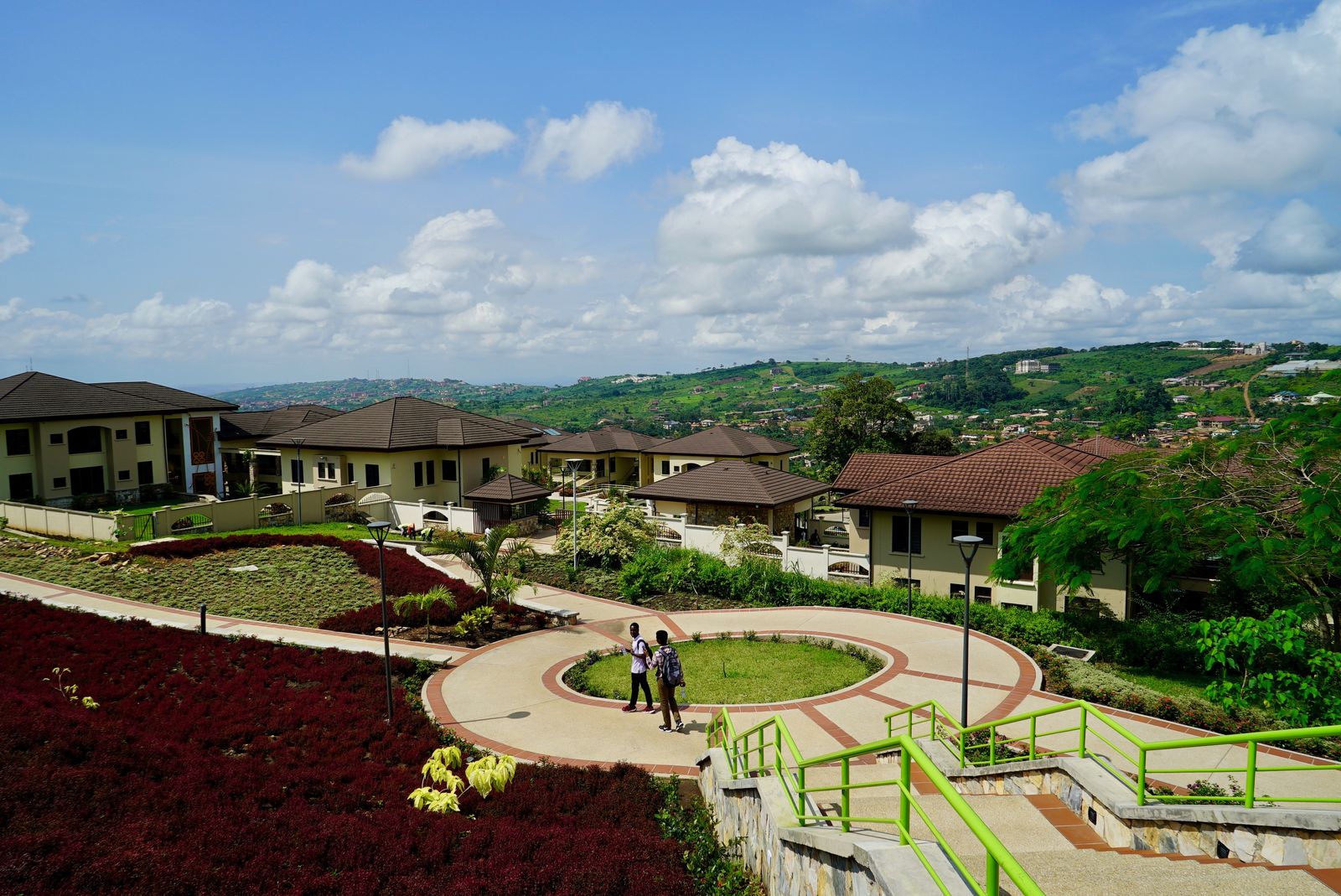 Now that student housing is available on campus, there have been more female applicants. 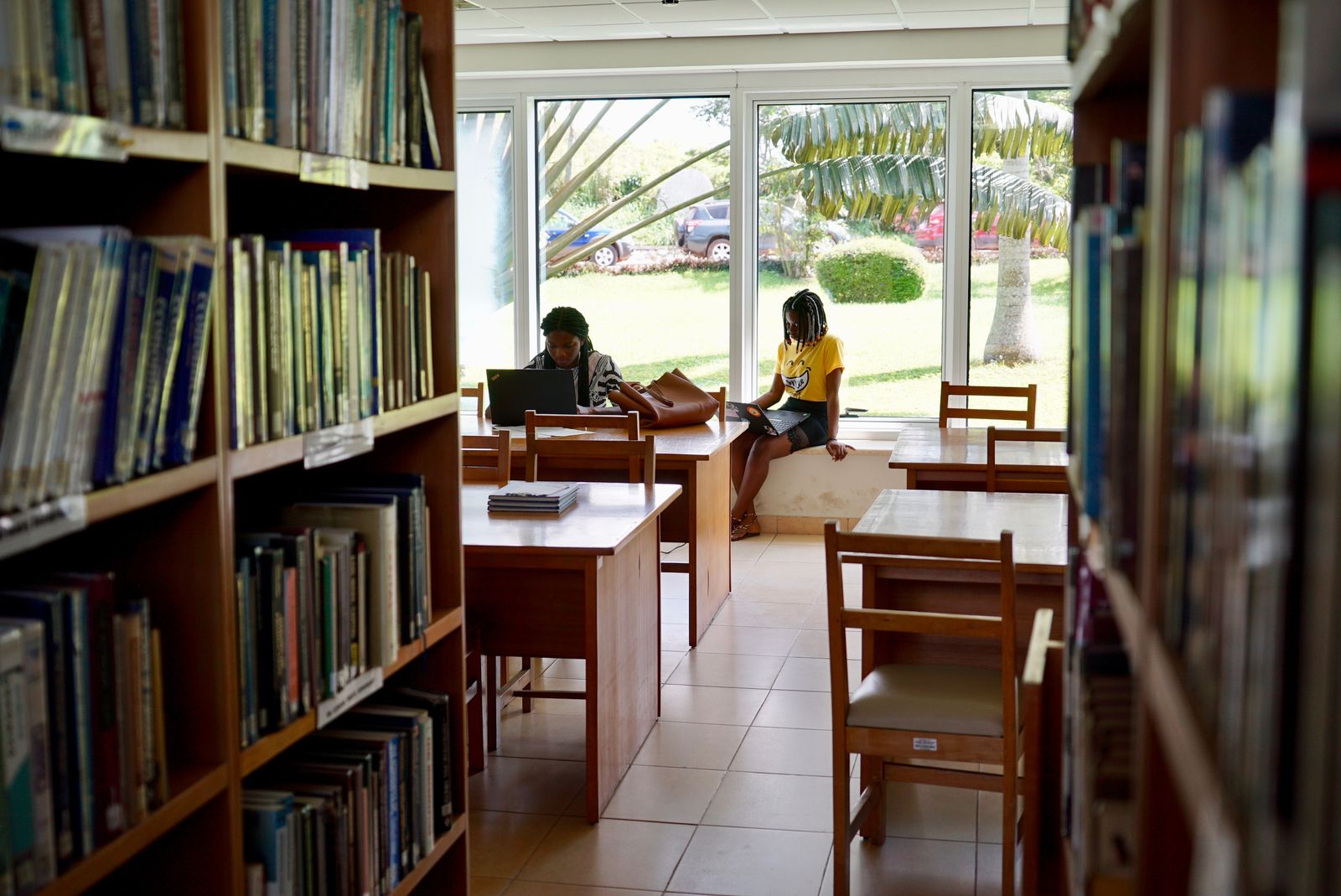 Half the students at Ashesi University are women. 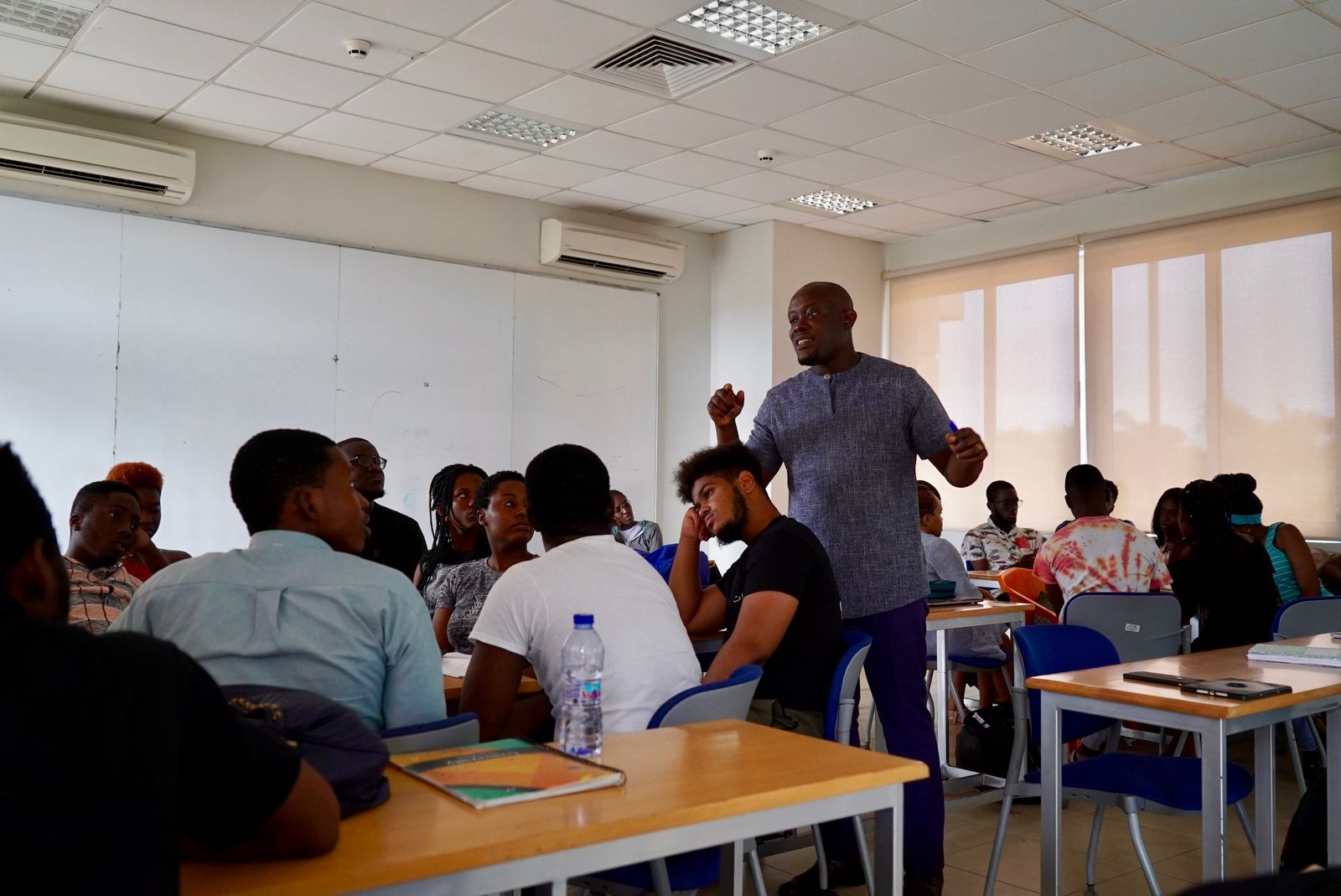 A main focus of the university is teaching students how to think. 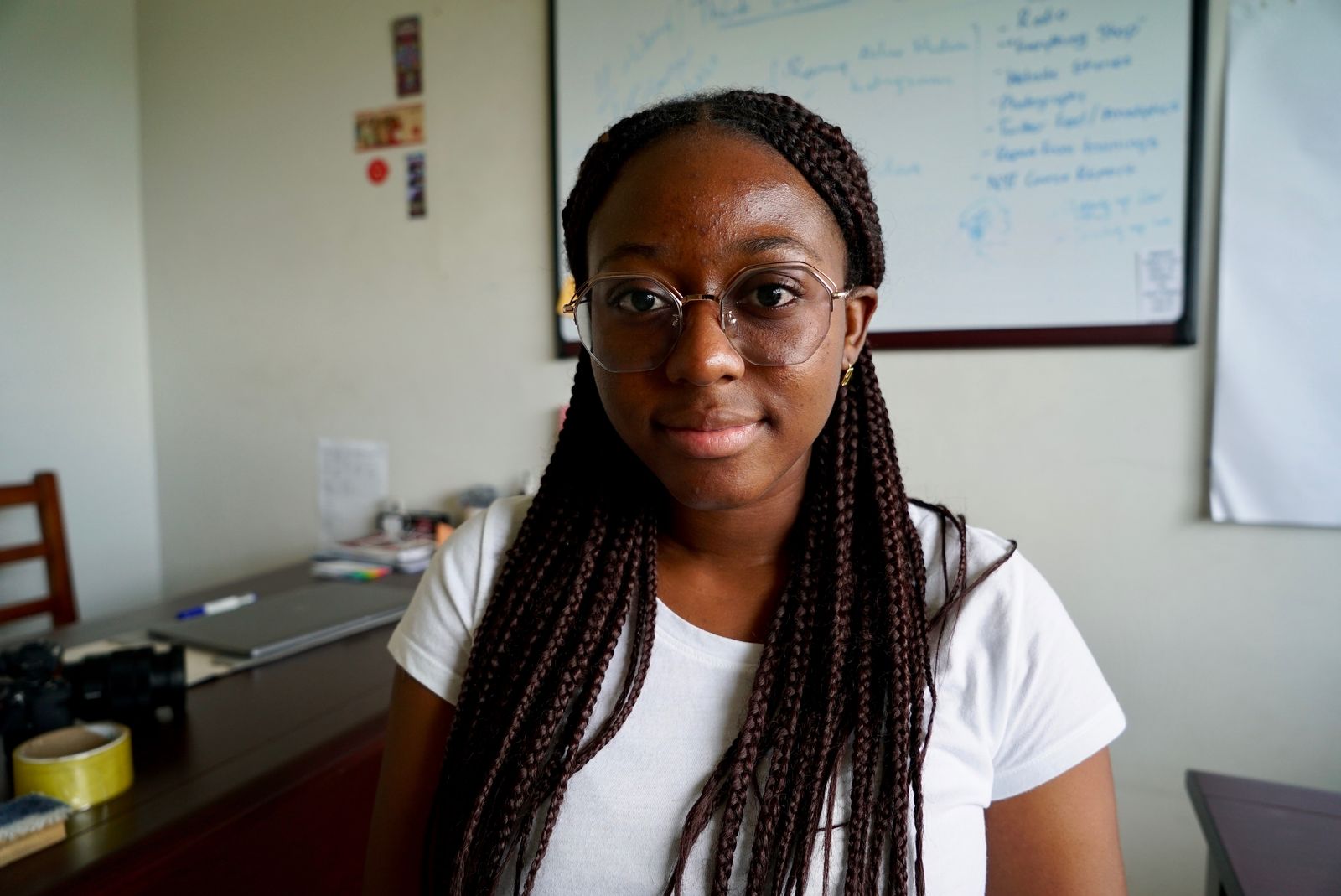 Edel Togobo, 20, is a student at Ashesi University. She hopes to start her own company after graduation.