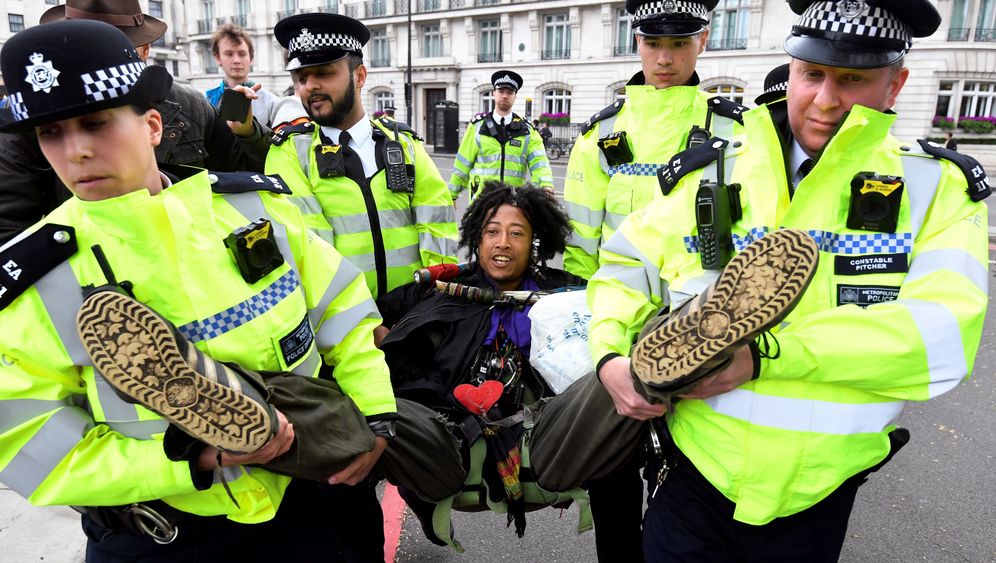 To understand how radical climate activists tick, a layperson need only listen to an anecdote about button pins. It's early August, and roughly 150 supporters of the growing global protest movement Extinction Rebellion (XR) have gathered in Hamburg for a weekend of workshops. A small bowl holds handfuls of button pins, each with a small red heart.

Go ahead, one of the organizers tells the crowd, grab one and put it on. It's an invitation to her fellow campaigners, who needed to get their impending sense of doom over the climate off their chests. As soon as your emotional capacity is exhausted, the organizer says, feel free to take off the pin. "Of course," she adds, "maybe wait until the discussion is over." The crowd laughs.

The impact the XR movement will have may still remain to be seen, but if this weekend in August has made anything clear, it's this: The activists may be courting the maximum public attention with their acts of civil disobedience, but to one another, they're incredibly sensitive.

It would be too easy to simply dismiss the organizer's offer for everyone to say what's on their mind as a kind of contrived mindfulness. Much more, the group's approach explains why so many activists from around the world have joined XR within such a short amount of time. But what kind of people are they? What are their goals? And how do they intend to achieve them?

XR doesn't see itself as a bunch of elitist activists, but rather as a collective movement that accepts all people with open arms. Ever since the first XR activists proclaimed a "rebellion against the government" in London's Parliament Square on Oct. 31, 2018, the movement's organizers say it has expanded into dozens of countries, including the Solomon Islands in the South Pacific and the United States. Alongside Fridays for Future, Extinction Rebellion is setting out to establish itself as the second arm of a new global climate protection movement.

XR's supporters want to bring traffic, business and government affairs to a standstill. They hope to achieve this through peaceful civil disobedience, with the ultimate goal of forcing a turnaround in climate policy. In London, they simultaneously occupied and blocked five bridges in November 2018, affixed themselves to the gates of Buckingham Palace with superglue, and dumped buckets of artificial blood on Downing Street in March 2019. In Germany, XR activists occupied the Oberbaumbrücke bridge in Berlin in April for hours and the Deutzer Brücke bridge in Cologne in July. Both are important bottlenecks for the flow of traffic.

Their motto is "uprising or extinction." CO2 emissions, they argue, continue to rise rapidly. And even the goal of limiting global warming to 2 degrees Celsius (3.6 degrees Fahrenheit) seems like a far-fetched dream. And the say that species are disappearing at a rate a hundred times faster than ever before in the history of evolution.

"The ecological crisis is, simply put, existential," says Carina Liersch. The 23-year-old is good-natured, laughs a lot and gestures with her hands as she speaks. She has painted a sun on the strip of masking tape affixed to her blouse that shows her name. She recently completed her bachelor's degree in political science, and now she has the entire summer to put that knowledge into practice. "When it comes to my own activism, I'm quick to engage," Liersch says. "I get inspired quickly, especially when the mood is positive." So far, she's demonstrated against the far-right populist Alternative for Germany (AfD) and for sea rescues of migrant boats in the Mediterranean, although she's never formally joined any group.

Extinction Rebellion is seeking to recruit people just like Liersch on this weekend in Hamburg at the event, which it is calling "Rebel*innenschmiede" -- literally: forging rebels, with an asterix to make it gender-neutral in German. The first local chapter was founded in Germany at the end of last year, and today, there are 50 chapters spread across the country.

XR flags blow in the wind in front of a coworking space in Hamburg's Schanzenviertel district, a hotbed of alternative culture. Inside, the attitude of wanting to change the world is palpable. A buffet has been set up with food -- vegetarian, of course -- rescued from dumpsters. A young woman plays the old Italian anti-fascist song "Bella Ciao" on her guitar, though she's changed the words to "Rebella Ciao." Pensioners can be seen mulling around alongside girls in hippie attire and tattooed hipsters. A cocker spaniel scurries through with a scarf around his neck bearing the XR logo.

XR counts some prominent personalities among its supporters in Germany. They include the German actress Pheline Roggan and Jan Plewka, the lead singer of the rock band Selig. The British band Radiohead donated proceeds from its music sales to the movement, and Carola Rackete,the captain of the German NGO Sea Watch, which facilitates the rescue of migrants in the Mediterranean, wore a T-shirt with the XR logo during her first talk show appearance.

XR appreciates the attention. Starting on Oct. 7, the movement has some big events planned that will span several days. XR wants to get no fewer than 10,000 people into the streets of Berlin. People will also be demonstrating that day in Paris, Amsterdam, Madrid, Buenos Aires and other cities. If everything goes according to plan, the world's capital cities will have something to look forward to.

Carina Liersch plans to attend the protest in Berlin. "XR is getting such an influx of support because people have been inundated with the facts about climate change for years. Now, someone's finally doing something," she says. "I want to be involved. For me, this is a last glimmer of hope."

The fact that Extinction Rebellion is attracting so many different kinds of people is entirely by design. The movement was conceived by the British activist and organic farmer Roger Hallam and a group of like-minded people. They claim to have studied all sorts of past social movements. Which tactics worked and which didn't? What caused groups to ultimately disband? And what had to be done to win over the broader public? Hallam distilled their findings into an 80-page treatise. One experienced activist in Hamburg had this to say about the paper: "Now, this isn't our Bible, but ..."

The paper's findings can be summed up as such: In order to attract broad support, the climate movement must shake its leftist reputation. XR wants to be ideology-free and undogmatic. Non-violence isn't only morally superior -- it's also more successful than other strategies. What's more: Rebellion should be fun. On this particular Saturday in Hamburg, for instance, adults can be seen running around playing tag with each other.

"It's the best thing I've ever done, except for maybe sex," says Michael Timmermann, describing his engagement with XR. The 54-year-old was one of the first people to bring the movement to Germany. Normally, he works as a freelance translator, but since the end of 2018, he has dedicated himself full-time to activism. "I've learned more in these few months than ever before in my entire life," he says.

His experiences echo those of other XR activists who spoke to SPIEGEL ONLINE that weekend. Many talked about a moment of awakening in which they realized that climate scientists' admonishments -- and the disaster scenarios they presented -- weren't simply theoretical possibilities that could be suppressed at will, but that reality had already overtaken many of the forecasts. "The environmental crisis, i.e. the apocalypse, isn't something that can't happen. We're heading for it," says Timmermann. "What can we do to face it without fear?"

What Makes XR So Special

Many of the people who have joined XR find it refreshing to be around and work with like-minded people. "We're all affected by this threat. But we can do something. Non-violent rebellion. This self-empowerment is so liberating!" That, at least, is how Timmermann experiences it. "I used to be connected to the world only through books. With XR, people who want something get together. They say that things can't go on like this. And through this, they find themselves." A little later, he adds: "Everything makes so much more sense now."

Awakening, apocalypse, meaning -- that's religious vocabulary. The AfD has already referred to Extinction Rebellion as a "climate cult." But that's inaccurate, not least because the group itself is decentrally organized. But XR does have some similarities with religious communities: Its followers share an apocalyptic vision; they are certain they have discovered the absolute truth; and they have a desire to proselytize others. They've even devised rituals for dealing with the psychological stress that arises from constantly thinking about the planet's impending destruction.

Back at the coworking space, a slender man writes incomplete sentences on a blackboard. "It's hard for me, because ..." "I will always remember ..." "Now that I have shared my grief, it will be possible for me to ..." The roughly 30 workshop attendees are encouraged to complete the sentences. Then the leader says, "Each of you may now consider whether you would like to share with the others."

A woman in her late 30s raises her hand, steps forward and begins to speak. It's hard for her, she says, because "I have to give my children confidence and hope that I don't feel myself." Three activists step forward and put their hands on her shoulders. The woman continues, saying she'll always remember "the happiness of standing in front of a tree, combined with a feeling of sadness and parting." More people stand up and approach her, extending a hand of empathy. The woman begins to cry.

Two days later, the woman tells SPIEGEL ONLINE by phone that she feels relieved and has a newfound sense of momentum. "I think that's what makes XR so special. This mental cleansing, this way of dealing with others and yourself, plays a very central role. It carries you, it gets you out of this loneliness, because everyone feels the same way," she says.

Carina Liersch seems more cheerful by nature, but that could just be a privilege of youth. "I get goosebumps every time I think, 'Shit, we're really heading toward the point of no return,'" she says. What she means is that the effects of climate change are becoming irreversible and mutually reinforcing. "But then I think to myself, 'No! Guys, we can turn this around!'" Sure, her efforts could turn out to be fruitless -- but even then, she could always quit, travel the world and burn insane amounts of jet fuel. But, she figures -- it's worth a shot. 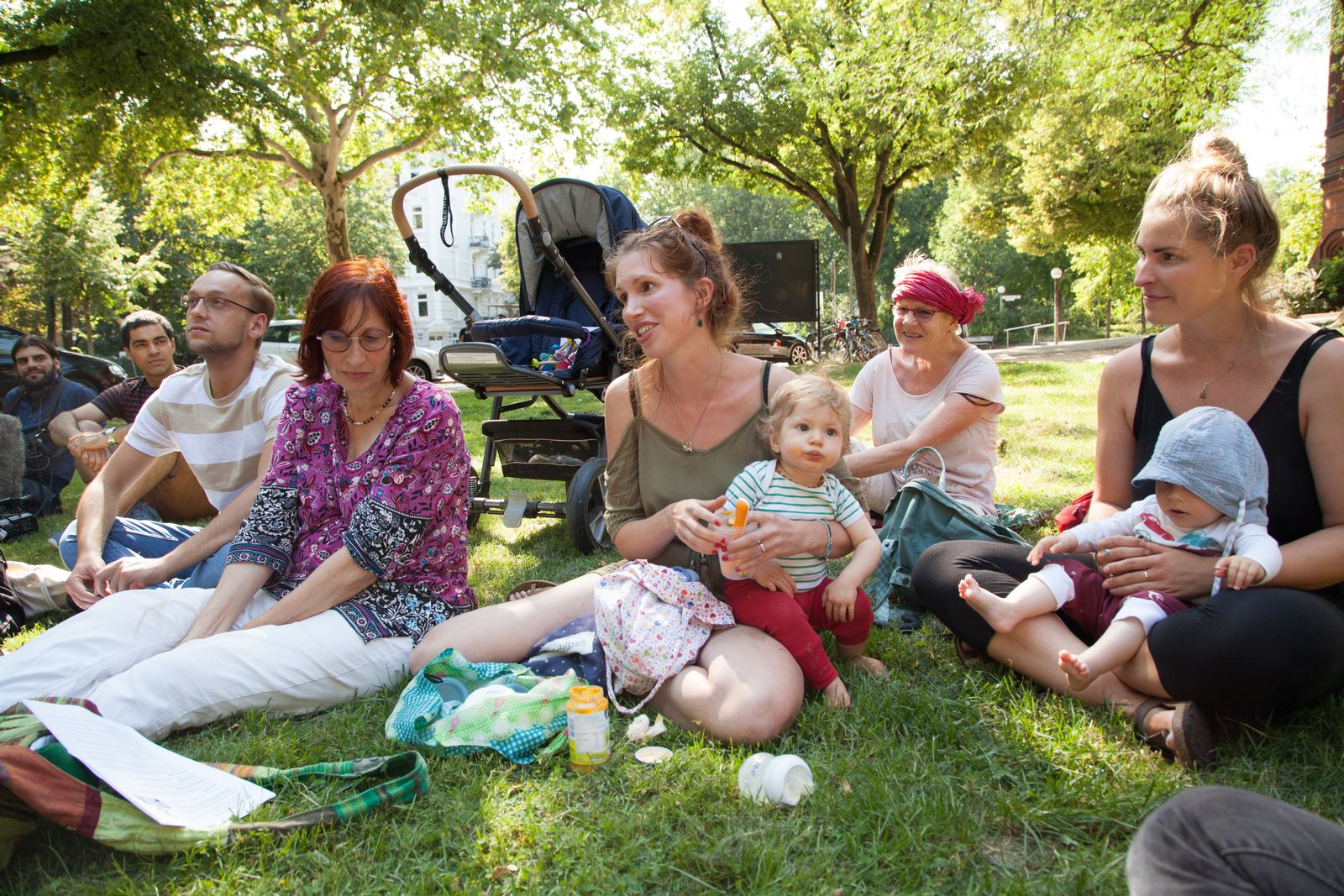 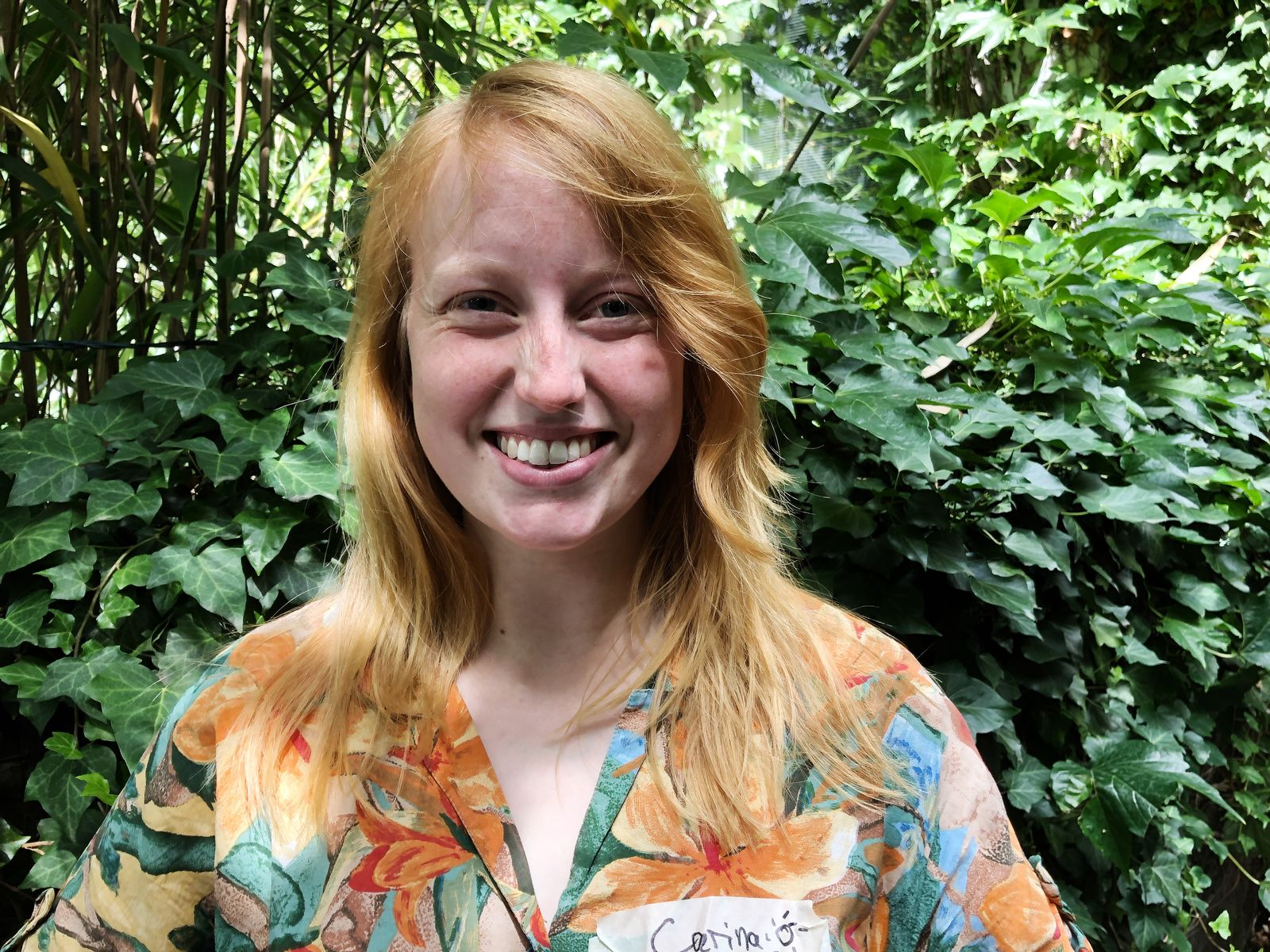 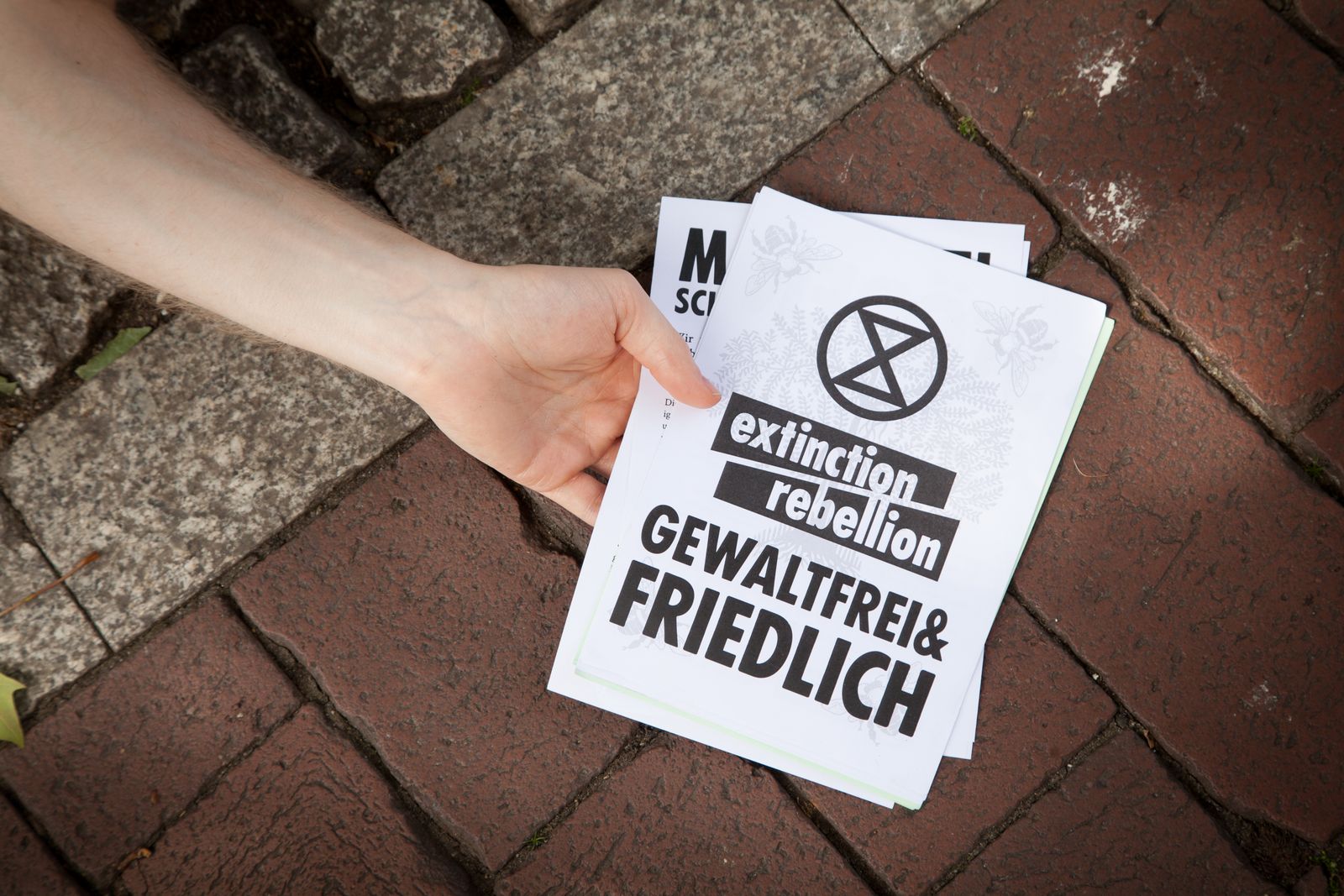 Extinction Rebellion flyers being passed out in Hamburg 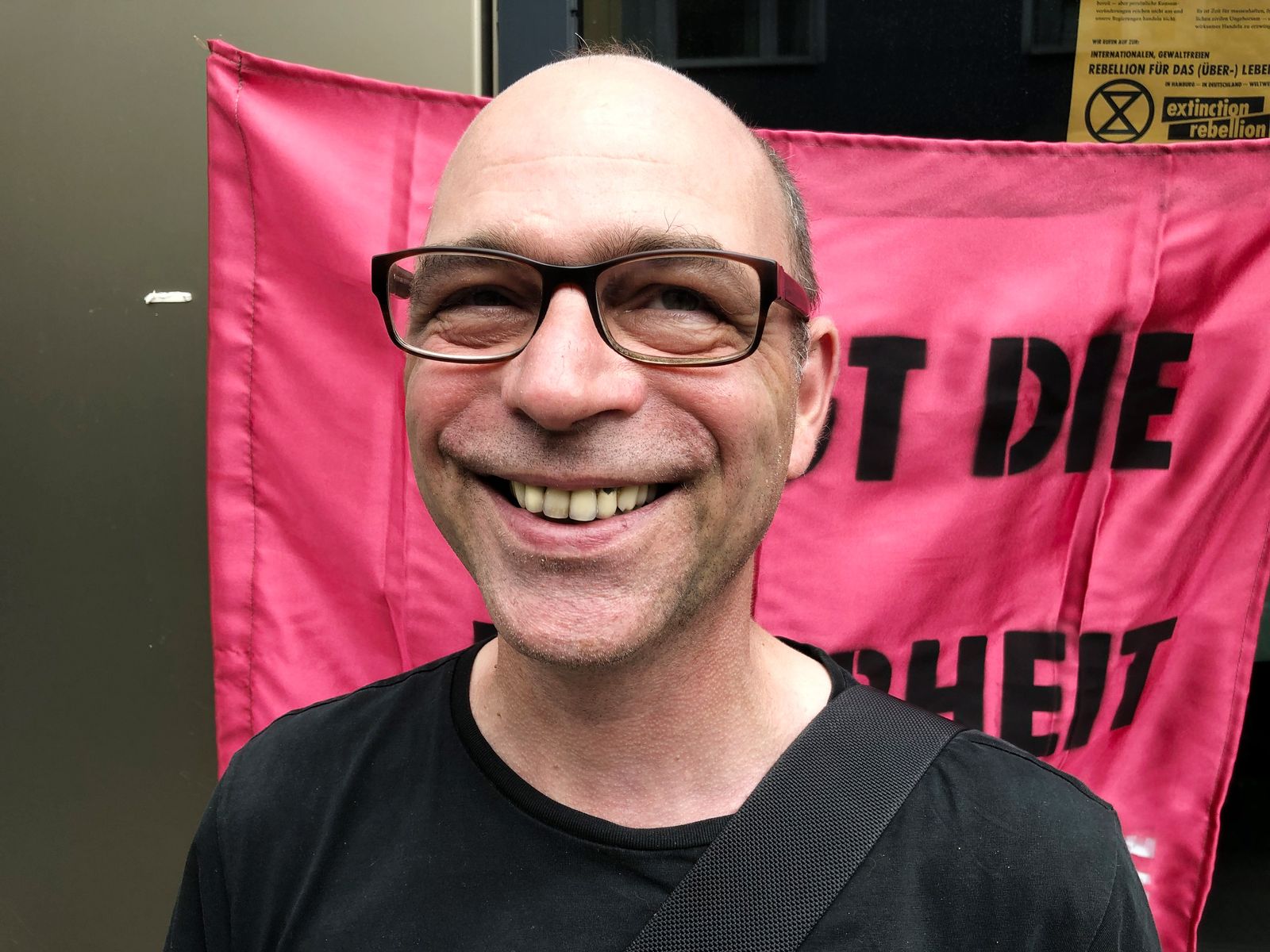 Michael Timmermann says helping to bring XR to Germany was one of the best things he's ever done. 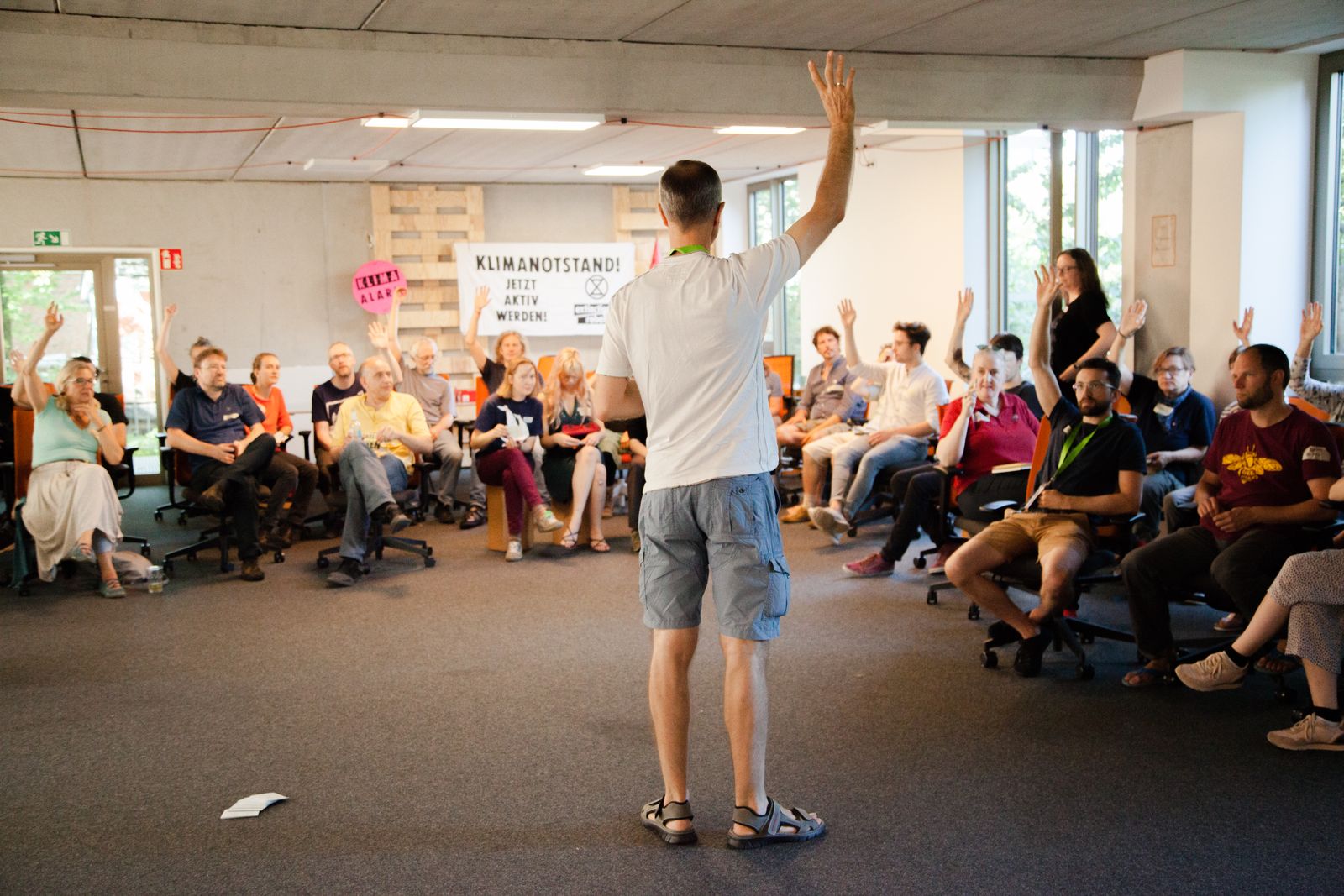