In Germany, thousands of school children and university students gather each week for the Greta Thunberg-inspired Fridays for Future protests to stop climate change. In Moscow, though, there's just one protester. For more than three months now, a lone climate activist has been raising attention for the cause. Rain or shine, Arshak Makichyan, 25, stands with a cardboard sign in front of Moscow's Pushkin monument every Friday. "Climate collapse is coming -- war, hunger, death," his sign reads in Cyrillic letters.

Makichyan is the only Fridays for Future demonstrator who has dared to take to the streets in downtown Moscow in the past 17 weeks. This is partly because Russia's restrictive Assembly Act comes into force as soon as two or more people attend an event. At that point, a protest must be registered with the authorities, who have so far refused to approve Fridays for Future a permit for rallies at the site. In May, Makichyan received occasional support at the Pushkin monument, and in March the authorities even authorized a demonstration in a park -- albeit on the outskirts of Moscow, as far away from the city center as possible.

Because of the Russian authorities' disapproval of the young protesters, police haven't issued any permits for the student's protests in Moscow's city center. But fellow students would like to join Makichyan in his protests. And there have been messages of solidarity from activists around the world: "Let Russia strike for climate."

"At first, I was very afraid," he told DER SPIEGEL in an interview. "The police came and took down my personal details. Pedestrians cursed me as an American spy or thought I was a beggar and wanted to give me money. But I kept going because the government is doing nothing and climate change threatens human lives in Russia."

Makichyan said he didn't tell his family about the protests during the first weeks and that his mother and father only learned about it from press reports. He said he didn't want to worry them. For him, the Pushkin monument is a symbol of freedom and courage. "Pushkin himself was a victim of state control and censorship," the violinist and music student said. Besides, he said, thousands of people pass by the monument each day.

Makichyan stands in front of the Pushkin memorial in Moscow with a poster reading: "Climate collapse is coming -- war, hunger, death."

Makichyan also raised serious accusations against Russia's president. "Putin lies," he said. "He pretends at international conferences that climate protection is important to him, but he's actually only interested in drilling oil in the Arctic."

Vladimir Putin isn't an open denier of climate change in the style of U.S. President Donald Trump or Brazilian Prime Minister Jair Bolsonaro. Russia signed the Paris climate agreement and announced several weeks ago that it would now ratify the treaty at the national level. "Russia is adept at using climate negotiations tactically for foreign-policy purposes, to win PR points and to negotiate concessions in other policy areas, for example," said Fabian Burkhardt, a Russia expert at the German Institute for International and Security Affairs (SWP) in Berlin.

But Russian environmental activists lament that the international statements made by the Russian president are in stark contrast to his action. "The government is doing almost nothing to protect the climate -- neither in terms of CO2 emissions nor in terms of adapting to the consequences of climate change," said Alexey Kokorin, a climate expert at WWF Russia. He said there's little more than lip service to climate protection.

The harbingers of the climate crisis can already be felt in Russia. In early July, 18 people died in flash floods in Irkutsk in the southeast of the country. The authorities said they were the worst summer floods in the 100-year-history of local weather records and that thousands were left homeless by them. Although climate researchers at the University of Irkutsk see a connection with man-made climate change, the authorities officially deny that version.

The Climate Crisis Can already Be Felt in Russia

Some of the consequences of climate change can no longer be ignored -- they even present a threat to the Russian economy. Only a few years ago, Russian oil and gas companies were thrilled about the prospects of more easily accessible production sites, but now the flip side of the thawing permafrost soil in northern Russia is becoming increasingly apparent. When the permanently frozen subsoil melts, the soil becomes muddy and unstable. It causes streets to buckle and cracks to develop in buildings, eventually causing them to collapse.

Costs of more than 100 million euros a year are already being incurred through the repair of the damage caused by rising temperatures. A total of 36,000 buildings, 13,000 kilometers (8,000 miles) of roads, 100 airports and gas and oil pipelines are threatened by the melting permafrost, researchers recently reported in the journal Nature Communications.

"Given that its own raw material reserves will last for decades and key players in the Russian business community will draw enormous pensions from this resource wealth, Russia currently has little incentive to participate in an active climate policy and to, for example, reduce production volumes," said Burkhardt.

So, it's little wonder that the Russian government is taking a hardline approach to the activists, and that it sees environmentalists merely as getting in its way. Only a few weeks ago, the news emerged that Russian environmental activist Alexandra Koroleva has applied for asylum in Germany. With her organization, Ecodefense, she helped prevent the construction of a nuclear power plant.

In Russia, she is now threatened with up to two years in prison for violating the country's "foreign agents" law. Under the controversial law, she has been accused of operating against the Russian government on behalf of foreign donors. "In addition to this deliberate political pressure, environmentalists are repeatedly involved in regional and local conflicts because, for example, protests against environmental pollution usually come up against substantial business interests," said Russia expert Burkhardt.

So, far the only things that has happened to Fridays for Future activist Makichyan is that police have taken down his personal details and his applications for protest permits have been denied. But that hasn't kept him from trying again each week. He said the authorities always have a different excuse up their sleeve for denying it.

If he could speak directly to President Putin, he said he'd tell him: "If you're not going to do anything about climate protection, then we have to take it on -- ultimately, it's our future." 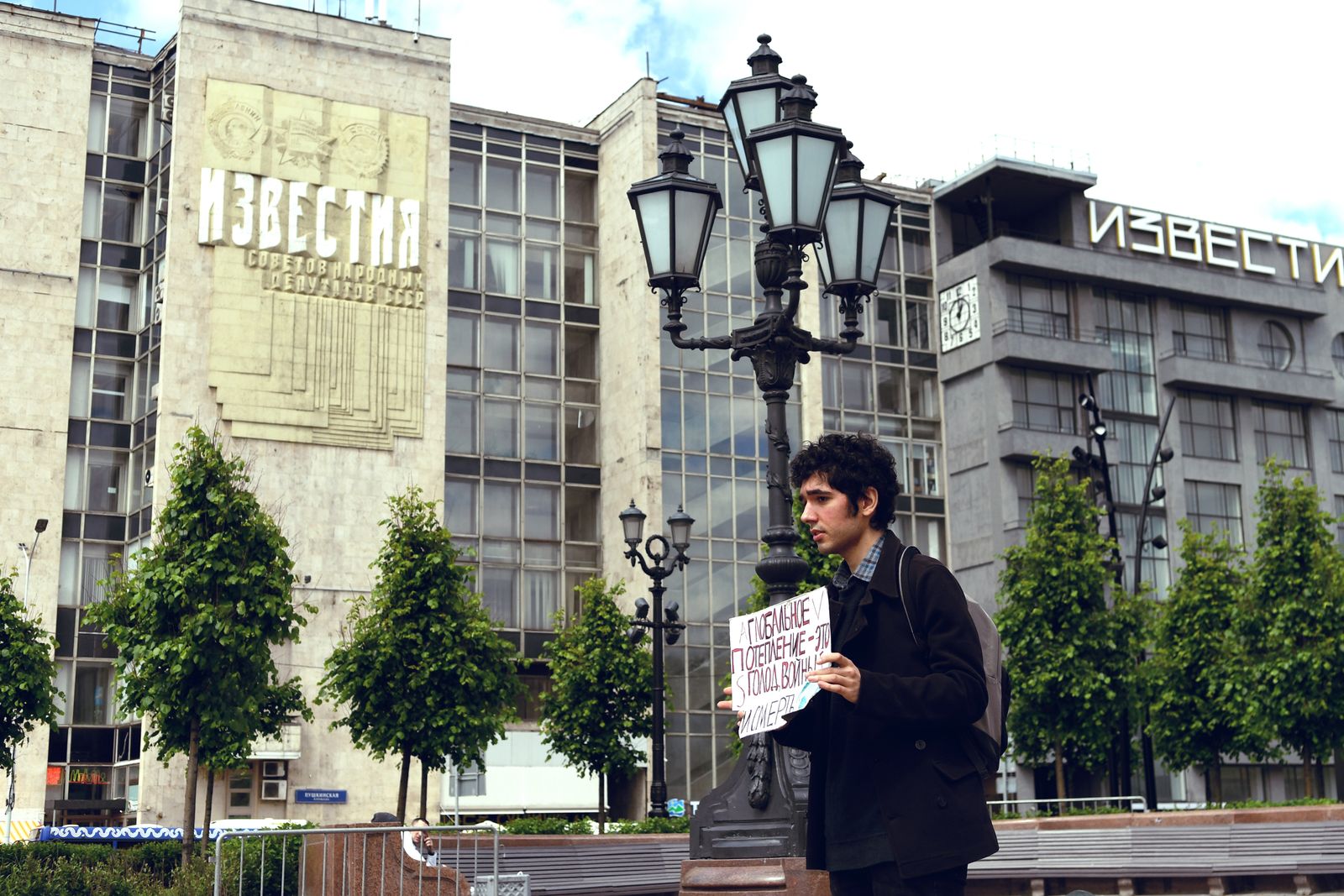 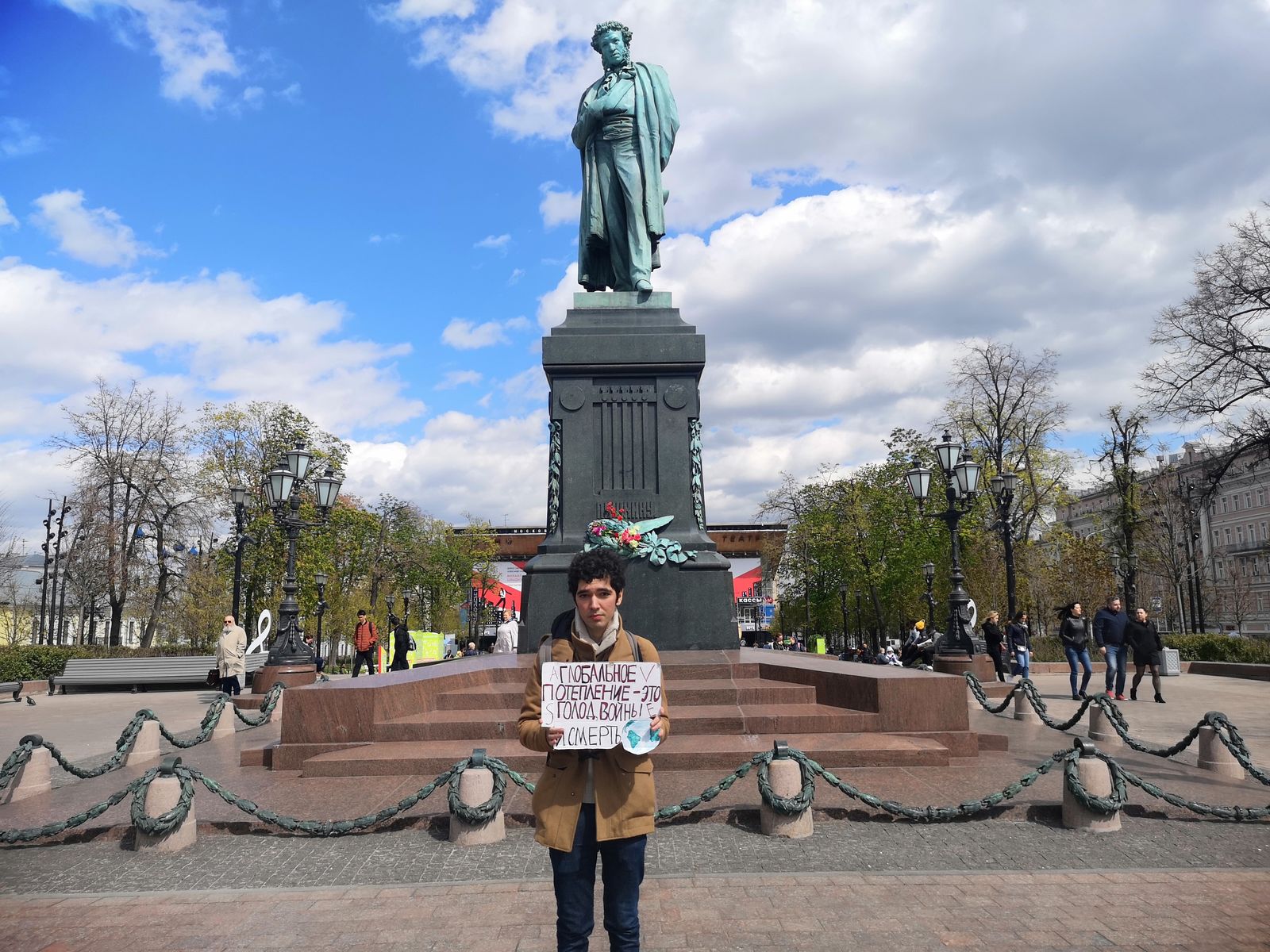 Makichyan stands in front of the Pushkin memorial in Moscow with a poster reading: "Climate collapse is coming -- war, hunger, death."