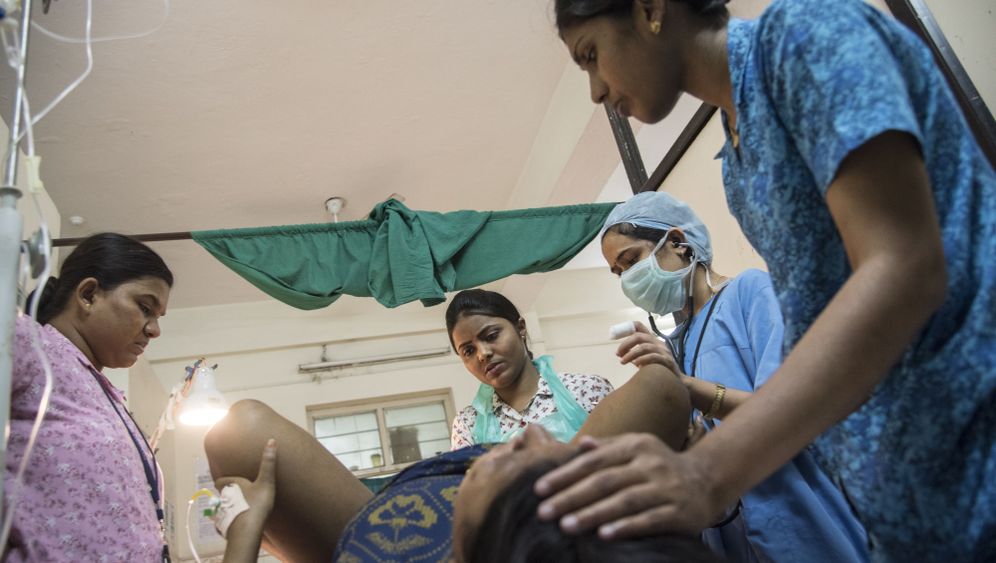 It is shortly before 1 a.m. in a state hospital in the South Indian city of Hyderabad. Four women are lying next to each other on metal tables, their legs stretched out toward the door. They are naked from the waist down.

Another woman in a dark blue dress is squatting on one of the tables and groaning. "You're doing great," says Rekha Marandi, a 25-year-old midwife who has pulled on a plastic apron over her flower-patterned blouse. A child might be born at any moment.

A picture of the eight-armed goddess Durga hangs above the door to the delivery room, framed by a garland of flowers. The Hindu deity symbolizes female power, but this female power isn't always evident here in the maternity ward. Only a simple curtain separates the delivery room from the anteroom, and it is often left open by the doctors and nurses rushing through. Rekha and her colleagues pull it closed again and again. It may just be a piece of fabric, but it is the only privacy they are able to offer the new mothers.

Rekha and her coworkers are some of the very few midwives in India. They were trained in a private clinic but do night shifts at the state hospital on the weekends. Here, they learn the practicalities of delivering a considerable number of babies. But the hope is that they might be able to change delivery-room culture for the better. Rekha says she was shocked the first time she helped out at the maternity ward of a state hospital: "Frequently, the women are poorly treated," she says. They generally receive no care at all before the enter the delivery room and no one is allowed to accompany them while they are giving birth.

"Everything to Do with the Female Body Is Considered Unclean"

In India, the second-most populous country in the world, giving birth isn't just a fight for new life. It can also be a struggle for dignity and self-determination. For a country that has been striving to improve its maternal health indicators, India has greatly underestimated midwifery, lagging behind countries such as Sri Lanka and Bangladesh, both of which have invested in creating a professional cadre of midwives. That, though, is now changing.

In December 2018, the Indian government announced that it would be offering an official course of training for midwives. The training program for nurses will last 18 months and the plan calls for the establishment of a national training institute along with five regional trainings institutes across the country. "We need to accelerate the decline in maternal and infant mortality, and we see this as an effective intervention," said Dinesh Baswal, deputy commissioner for maternal health at the Indian Health Ministry.

According to the 2016 National Health Profile, one in 769 women died as a result of pregnancy, much higher than the maximum target foreseen for 2030 by the Sustainable Development Goals laid out by the United Nations. There are some 32,000 such deaths in India each year, almost 90 per day, with most of them dying from blood loss or infections. According to the World Health Organization (WHO), it would be possible to reduce maternal mortality by more than 80 percent if pregnant women were given comprehensive care by midwives.

But thus far, there has been a lack of awareness in India for what exactly trained midwives do. The term "midwife" is used in India to refer to all women who help deliver children, in particularly the traditional "dais," whose knowledge is passed down across generations but who are unable to provide emergency care if needed. Vijaya Krishnan, the founder of Sanctum, one of the few birth centers in India, believes that the main reason for the lack of political pressure to provide state-backed training to midwives is because only women are affected. "Everything that has to do with the female body is considered unclean," she says.

In the Indian tech capital of Hyderabad, politicians, gynecologists and midwives have been fighting to improve maternal care. In the city, one can see the effect midwifery can have on maternal care at the local level.

Rekha spends much of her night shift walking back and forth between the delivery room and the labor hall. Bhobi, the woman in the dark blue dress, whimpers, "I'm scared." It's her first pregnancy. The 25-year-old wants to see her husband who is waiting outside the entrance to the hospital, but the assistant physician warns her: "You have to stay here. If you start walking, your water will break." Rekha speaks with the doctor and after a couple of minutes, Bhobi is permitted to go outside. "In the beginning, we weren't allowed to do anything here," says Rekha's coworker later. "But now, the doctors have adopted some of our methods."

Outdated rules and convictions still shape the approach to giving birth in many Indian hospitals: A woman shouldn't walk during labor; she shouldn't drink any water; she should deliver while lying on her back; and there is no reason for men to be in the delivery room. Most of all, though, women shouldn't complain so much.

Activist Mallavarapu Prakasamma, founder of the Indian Society of Midwives, says: "It's about being humane. Women shouldn't be treated like animals." Midwives, however, recount incidents of doctors and nurses pinching mothers during birth or hitting them on the legs with forceps.

And there are numerous reports of doctors and nurses insulting the mothers during birth, saying things like: Why are you screaming now? Didn't you scream in pleasure when you were having sex? Or: If you don't start pushing properly, your baby will die! Rekha Marandi says that she, too, has heard such threats. 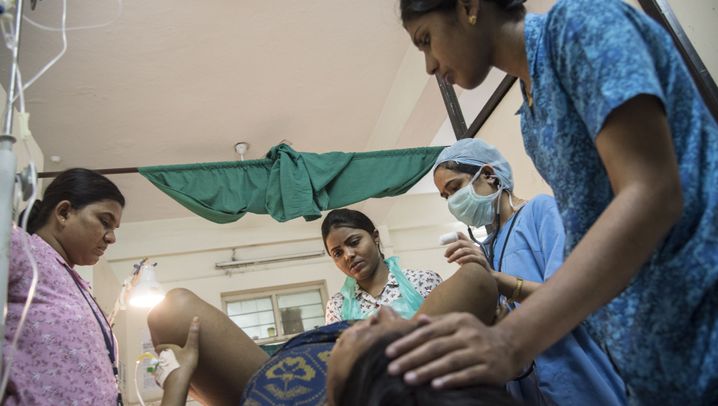 She and her colleagues want to change this approach. She gently strokes Bhobi's back, shows her how to do knee bends and teaches her a breathing technique to minimize the pain. "You're so nice to me," Bhobi whispers.

"The women here don't have an education," Rekha says. "They're afraid and they don't know what is going on in their bodies."

The midwives received their training just a few kilometers away in the hospitals of Evita Fernandez, a 65-year-old gynecologist with short, gray hair and a golden cross hanging around her neck. Her great aunt once used to help the Nizams give birth, the Muslim rulers of the city. Later, her parents opened a clinic for women.

After Evita Fernandez took over the clinic in 1996, she was soon providing care to hundreds of women a day, including an increasing number of emergencies. Some of the women died. Fernandez began reading extensively about maternal mortality. "I understood that if we had midwives in the country who can provide comprehensive care to the women, that wouldn't happen." In 2011, she began training some of her nurses to be midwives.

To reduce maternal mortality, India had long focused on reducing the number of home births. Across the country, low-threshold health centers were established and since then, women living in poverty have received a monetary incentive to give birth under medical supervision.

The approach proved successful: More than three-quarters of all births now take place in hospitals and the high level of maternity mortality sank by two-thirds between 1990 and 2015. And yet, the rate in India is still far higher than it is in Western industrialized countries.

Furthermore, the trend toward hospital births had an unintended side-effect, with the rate of Cesarean sections doubling in the country within a single decade to almost 20 percent. And in some states, such as Telangana, of which Hyderabad is the capital, the rate is much higher: A survey of more than 7,000 households revealed that the rate in private hospitals was an astonishing 74.9 percent and in state hospitals, it was 41 percent.

C-sections can save lives, but a study compiled by the Indian Institute of Management in Ahmedabad last November argued that around 900,000 such operations performed in private facilities could have been avoided. But they are profitable: A C-section takes less than an hour and can cost between 65 euros and 500 euros, or even more. Natural births, by contrast, tend to take much longer and bring in only half as much money. The operation also has its advantages for state-run hospitals: They often face personnel shortages and the surgical approach to birth makes it easier to plan.

In the Fernandez clinics, every third birth is now attended by a midwife. And Fernandez says that the increased reliance on midwives has led to a 50 percent reduction in the number of epidurals and C-sections.

The trend back toward natural births has also been evident among more affluent couples, with a growing number of young, educated parents opting for alternatives like birth centers, which have thus far been in short supply in the country. For such couples, giving birth is no longer just a women's health issue. They want to have a say in how they welcome their children into the world.

At 1:30 a.m., a scream rings out through the delivery room of the state-run hospital in Hyderabad. The security guard in front of the maternity ward brings Bhobi's husband into the hallway and he smiles as the nurse lays his child in his arms. A son. She then takes the baby to the neonatal ward.

A half hour later, midwife Rekha Marandi leaves the delivery room, washes her arms up to the elbow and adds disinfectant to her hands. A total of five babies were born during the last hour.

In a room next door, Rekha has a meal of rice and chicken together with her two colleagues. They talk about Bhobi and her birth. "It bothered me that the doctors wanted her to give birth so quickly," says Rekha's colleague Jismy. "We told them they should wait with the C-section." After all, it was Bhobi's first child and it can sometimes take several hours.

Ultimately, they were successful. The 25-year-old was able to give birth to her son naturally. 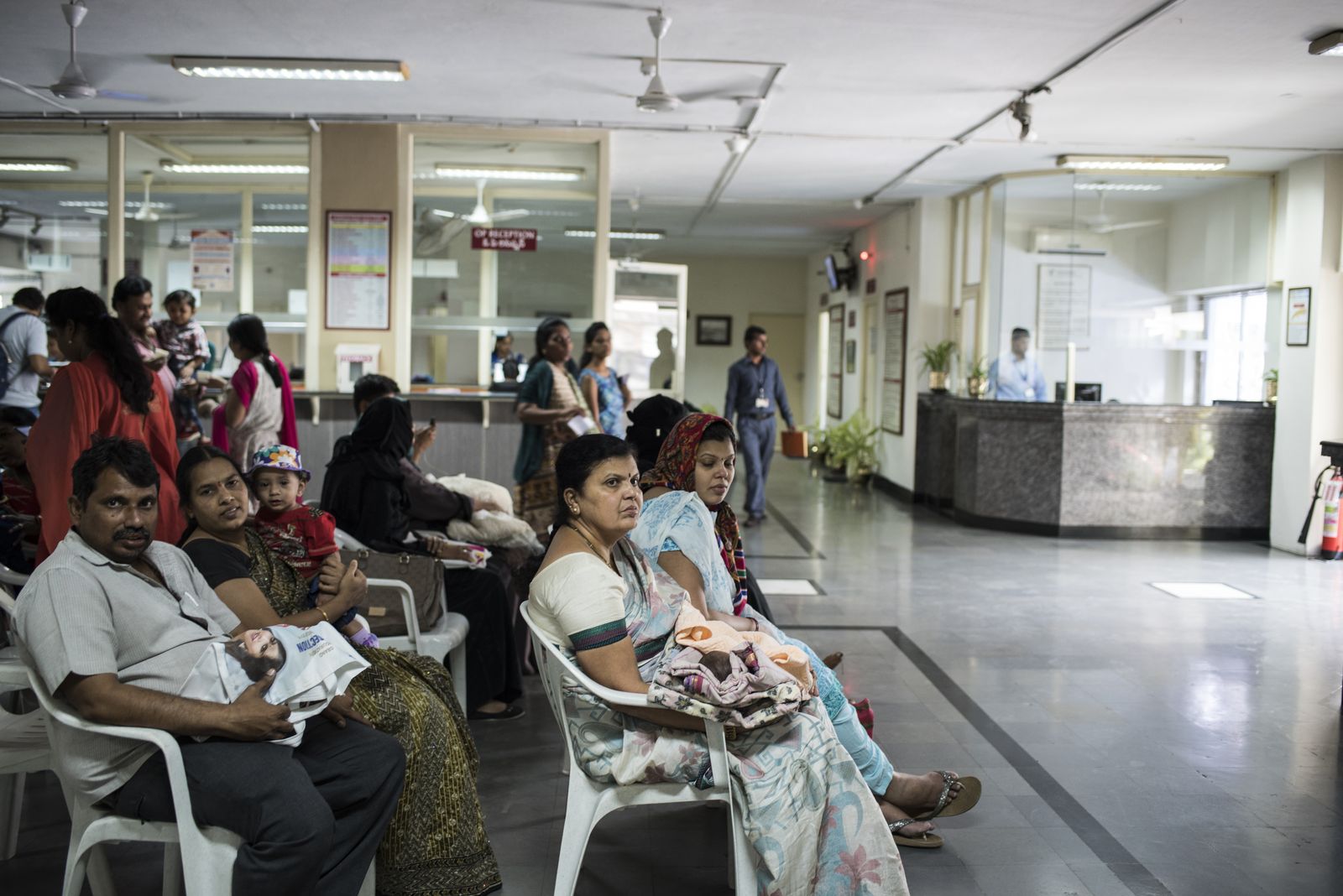 Patients waiting at the Fernandez Hospital in Hyderabad.