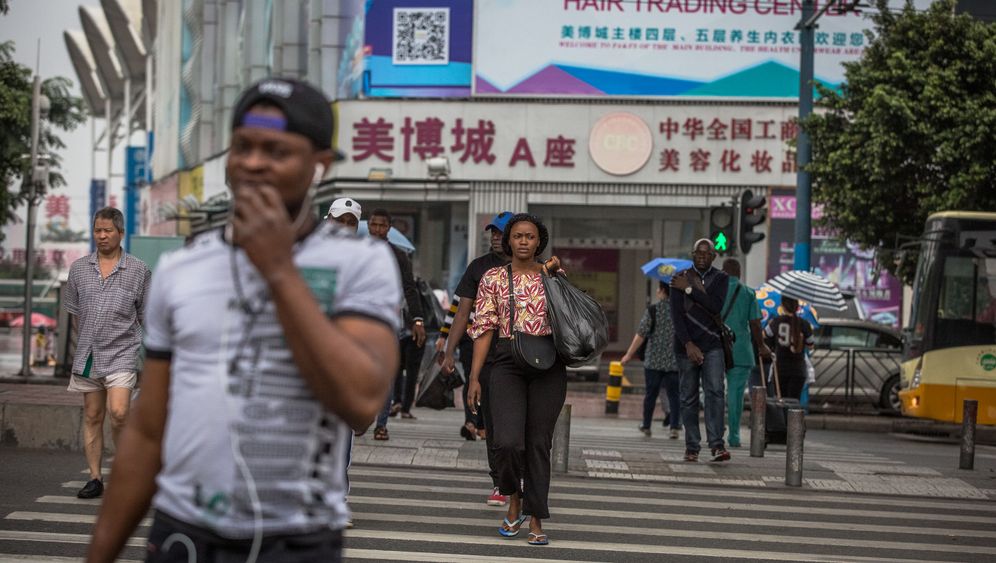 Most of the people who shop at the Yueyang Trading Mall in the Chinese metropolis of Guangzhou are dark-skinned. Clocks on the walls show the time in Cairo and South Africa. Inside the small shops, Chinese retailers sell football jerseys and mobile phone accessories, suitcases, wigs and hairpieces in every color.

One shop specializes in nail polish, another in pots. A number of businesses seeking to attract African customers have also set up shop here. In one salon, hairdressers weave braids.

A short subway ride away, the restaurant Africa Pot serves up a West African classic: jollof rice with fried plantains. Outside, the streets are full of slender Somalis with crochet caps and women wrapped in colorful fabrics.

According to the World Bank, no country has a lower percentage of immigrants than China. The most recent data is from 2015, when migrants accounted for a mere 0.07 percent of the population.

A comparatively large number of migrants do, however, find their way to Guangzhou, a city of 12 million where many goods from China's highly industrialized Pearl River Delta are transshipped. Since the late 1990s, many immigrants from sub-Saharan Africa have tried their luck in the export business here.

At least 15,000 Africans live in the city, according to official data which does not include undocumented immigrants. Other estimates in recent years have put that number in the low hundreds of thousands. The diaspora shapes the city's Xiaobei district to such a degree that many Chinese have taken to calling it, "Little Africa" -- or by the blatantly racist name, "Chocolate City."

How is this minority faring in the world's most populous country? How do its people live and why are they here?

Tabou Diop from Senegal sits in the shop of a compatriot and makes tea. A Chinese woman walks inside and they speak briefly in Mandarin. Having studied it for three years at the Guangdong University of Technology, Diop speaks the language fluently. When she first arrived in China, she had no intention of making such an effort to integrate. "Staying was not the plan," the 28-year-old says. "My life in Africa was very good. I had a car, an apartment and my own band."

Meanwhile, after spending five years in China, Diop navigates the city with ease. She lives with two other Senegalese in a shared apartment and has many Chinese friends, including former university lecturers and members of the WeChat group Global Friendship, who do yoga and try out new restaurants together.

Diop is not only socially integrated in Guangzhou -- she has also made a career for herself here. She has managed to establish herself as a soul singer. She was even invited to perform at the city's official New Year's gala. Yet despite everything, she still doesn't feel totally at home.

The same is true for many migrants who no longer only view the United States and Europe, but also China, as lands of opportunity. However, those who arrive with hopes and ambition often first experience something completely different: racism and discrimination. 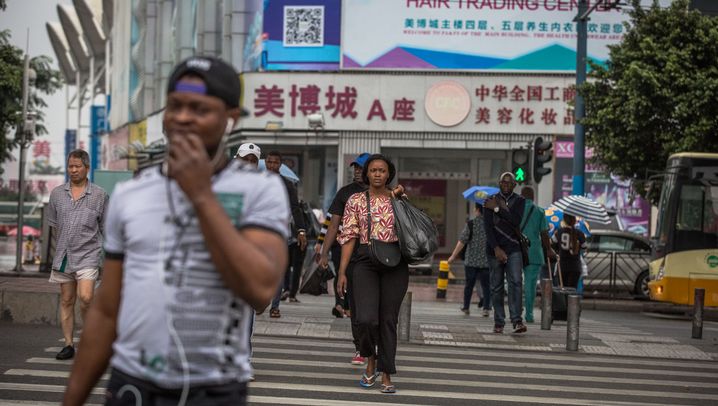 Although China doesn't make things easy for migrants without top qualifications or money, it does leave one door open to them that is often closed in the West. "China is open for business," is how the Canadian journalist Matthew Bossons sums it up. "People who want to come and trade are welcome to do so."

It was Tabou Diop's mother who convinced her to come to China. After so many years of traveling between Guangzhou and Senegal, she grew tired of the commute. Her daughter has since taken over the Chinese side of the business. Now, Tabou Diop buys shoes and textiles and exports them to Senegal.

'All of Guangzhou Knew the African Girl'

Originally, Diop had other life plans. She attended a music academy in Senegal and toured as a singer through neighboring countries. "Music is my passion," she says. "People can hear and feel you regardless of where you're from."

One evening in Guangzhou, she went to the Hill Bar for some live music. As the singer and the guitarist took a break, Diop dared to ask whether she could sing a song. She chose "Hasta siempre, comandante," a tribute to Che Guevara. The audience loved it. A short time later, the bar's manager called her. Would she like to perform in the bar once a week? Soon one evening became two, and two became seven. "After a month, all of Guangzhou knew the African girl," she remembers.

Diop continues to run her export business on the side and she's still required to leave the country every now and then to get a fresh stamp in her passport. As a freelancer, she doesn't qualify for an artist's visa.

Many migrants in Guangzhou grapple with uncertain legal statuses. It's true that it's not particularly difficult to get a business visa in China, but the problem is that it doesn't allow you to do anything except conduct trade. Multiple sources in Xiaobei say that more than a few Africans are lured to China with the prospect of factory jobs, only to discover upon arrival that they're not allowed to take them. Indebted from their travel expenses, some disappear underground while others turn to prostitution.

This did not escape the notice of Chinese authorities. According to media reports, they began cracking down in 2013. Since then, police officers have carried out stricter passport controls. Migrants without valid visas are deported. On an afternoon in early October, uniformed officers in Xiaobei could be seen conducting a number of random ID checks, albeit in this instance of Asian-looking pedestrians they stopped on the sidewalk.

"If you overstay your visa, they don't simply let you go," says Moustapha Dieng. The 59-year-old logistics entrepreneur has lived in Guangzhou since 2003. As a businessman with a residency permit, Dieng is one of the established ones. But as the president of the Association des Senegaleses en Chine, he knows all about the problems that some of his compatriots who enjoy less security face.

Anyone who gets caught staying in China without valid travel papers can be imprisoned for up to three months before being deported. In addition, they face a fine of up to 10,000 yuan (just under 1,300 euros) and possibly a five-year re-entry ban.

"There is a way around this -- not within the legal system," Dieng says. In order to be set free, one must pay a bribe of 25,000 yuan. Many people can't afford this or would simply prefer not to pay. Over the past decade, the official number of Africans in the city has fallen by 25 percent.

Apparently the authorities are concerned about more than just cracking down on migrants without residency permits. They appear to dislike the concentration of foreigners in neighborhoods like Xiaobei. In 2018, several hotels and apartment buildings posted notices that they were no longer allowed to accommodate guests "from all African countries."

African entrepreneurs experience similar discrimination when choosing the location of their company headquarters. "No new businesses may be registered in this building," Dieng says of the high-rise office building in which he is sitting. What he means is: Africans are not allowed to do so. "They want us to spread out," he says.

Even government institutions and corporations have repeatedly let examples of racism slip through, which may have to do with China's limited experience with immigration. In 2018, a Chinese actress appeared on state television in blackface. Two years earlier, a commercial drew international outrage after it showed a woman stuffing a black man into a washing machine and then a light-skinned Chinese man stepping out.

Officially, China has celebrated the "Chinese-African friendship" for years. It has hosted glamorous events, including the 2018 Forum on China-Africa Cooperation in Beijing. Tabou Diop was commissioned by the event's organizers to record a song titled, "One for All and All for One." In the elaborately produced video, China is shown as being full of modern skyscrapers while Africa is all giraffes and children playing soccer.

Time to Move On

One could regard the video as a symbol of the imbalance that can also be found in Guangzhou. "I don't really have a chance here," says Diop. "But at the same time, they need me. For every China-Africa event, for every event at an African embassy, they call me."

On the one hand, Diop says she misses Guangzhou when she leaves the city. Plus, her family in Senegal depends on the remittances she sends home from China. On the other hand, she's tired of the arbitrary treatment and ID checks. Several weeks after speaking to the reporter, she plans to travel to New York.

"I want to be freer with my music," she says. "If I lived in Europe or America, I'd probably be a part of the country already." Diop believes it is easier to get an artist's visa and permanent residency permit in Western countries.

A few months ago, she summoned her younger sister to join her in China. Her sister is learning Chinese and will one day take over the family business in Guangzhou. Diop says it's time for her to move on. 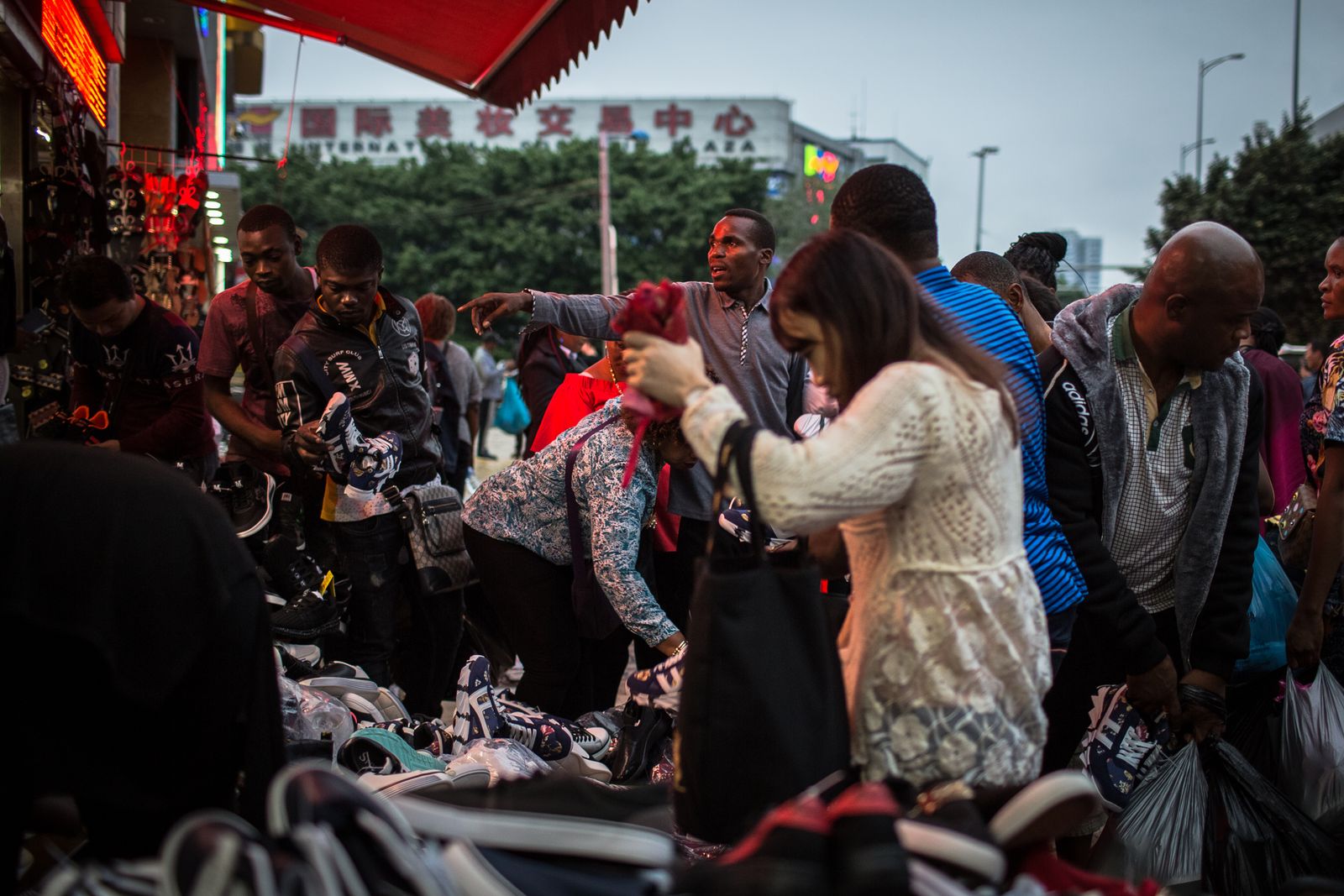 Africans and a Chinese woman look at shoes at a market in Guangzhou. 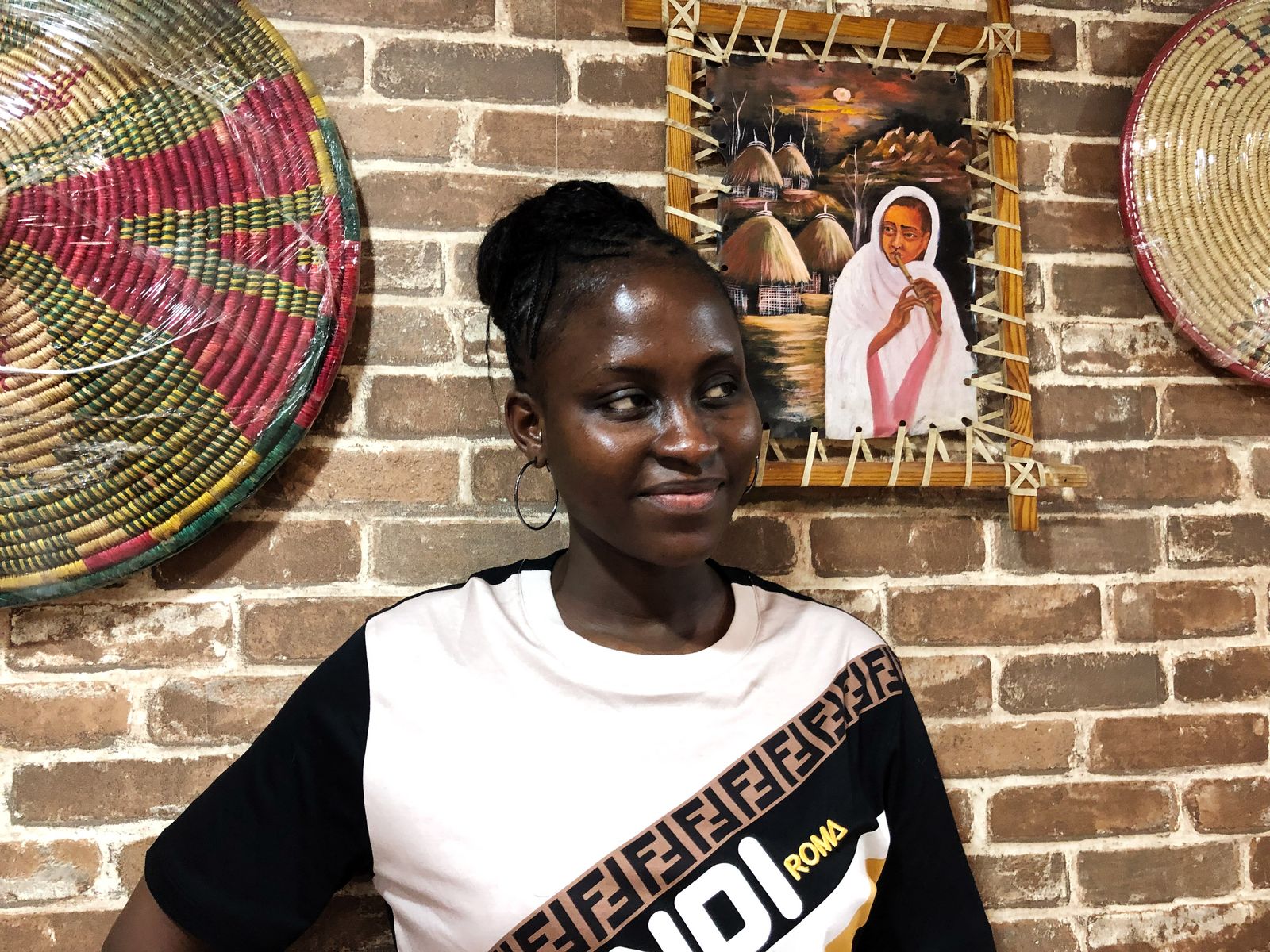 Tabou Diop, a Senegalese singer who lives in Guangzhou. 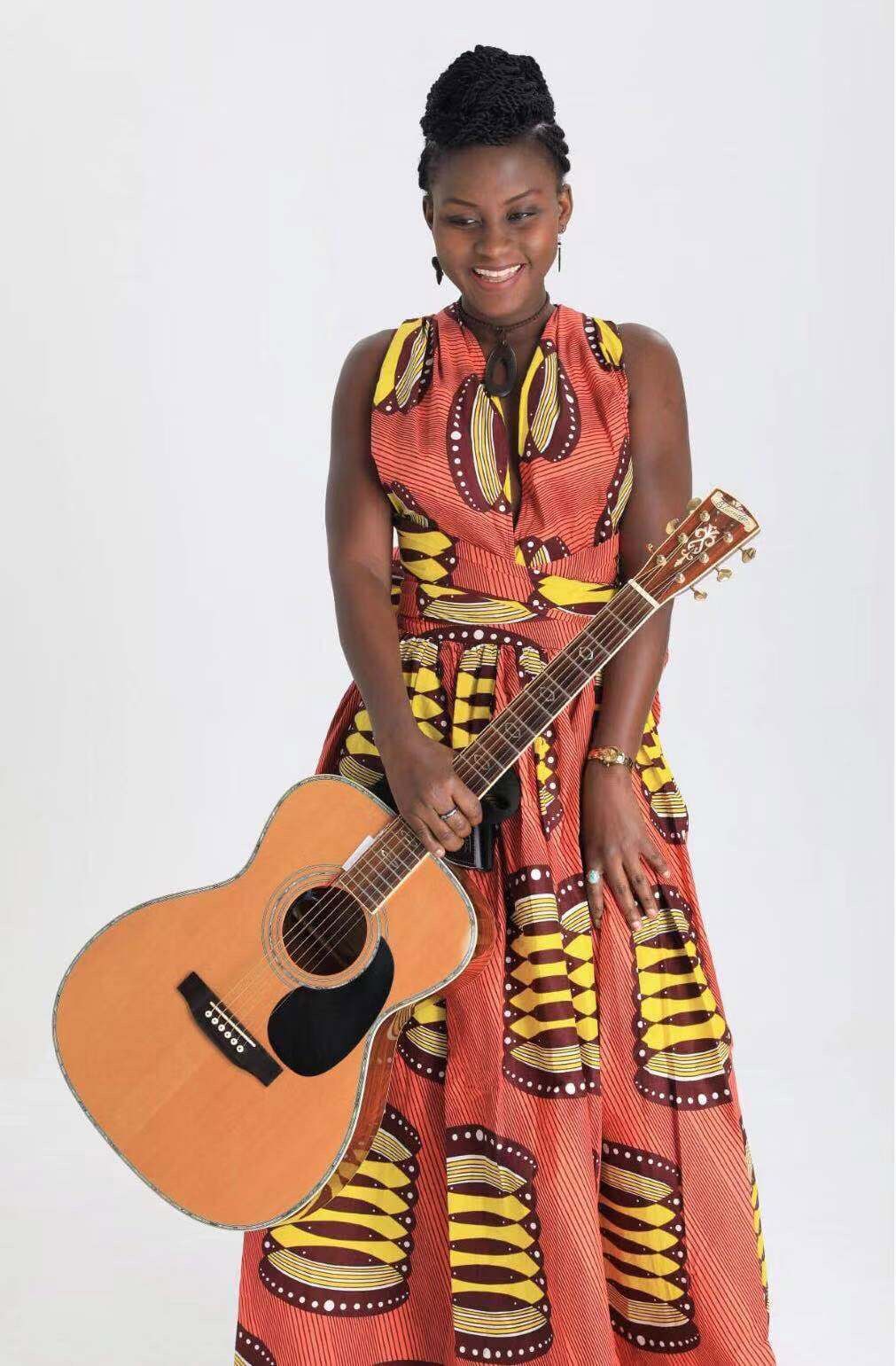 Tabou Diop also works in the export business but says her true passion is music. 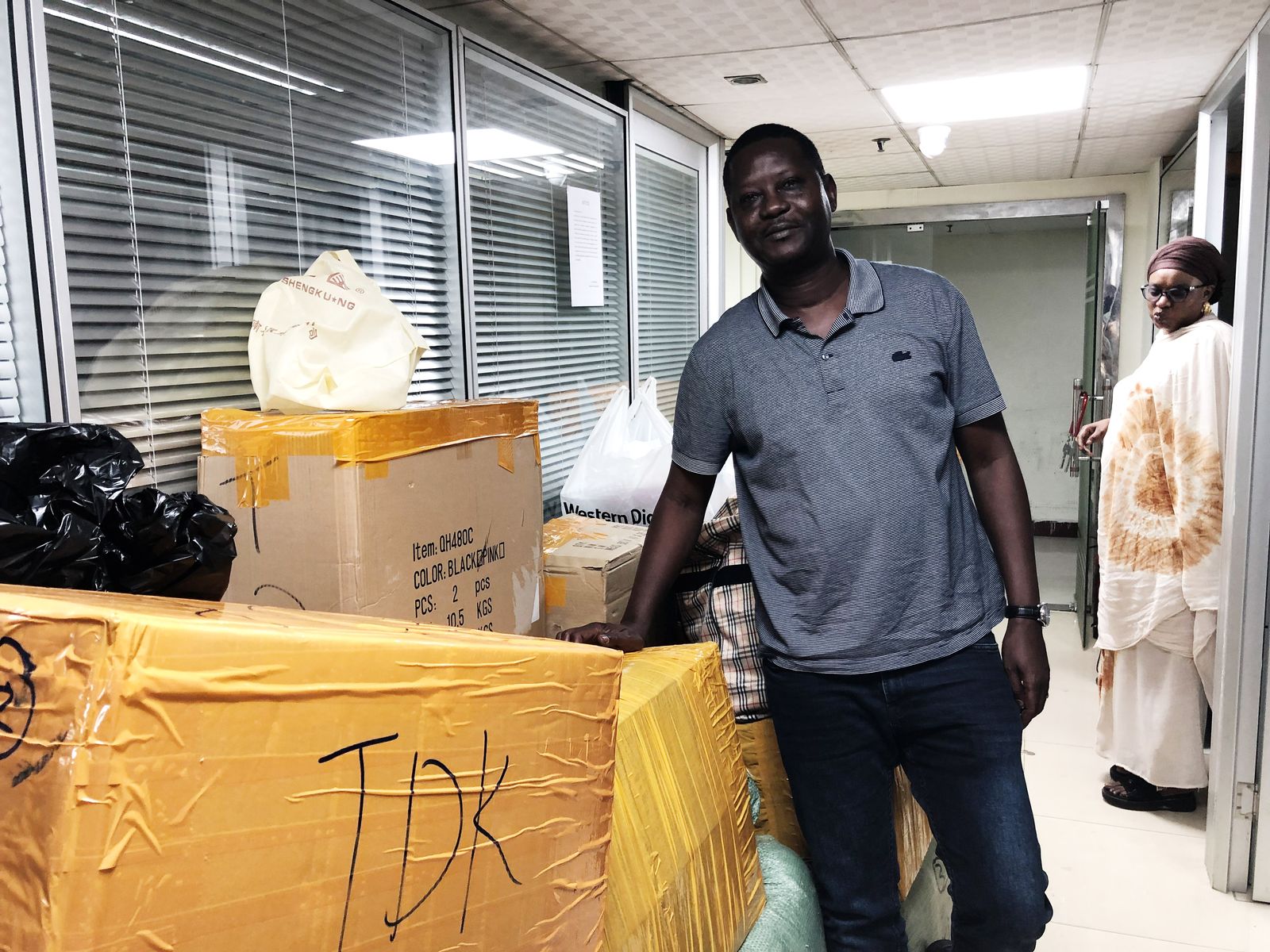 Moustapha Dieng is a logistics specialist and the president of the Association des Senegaleses en Chine. 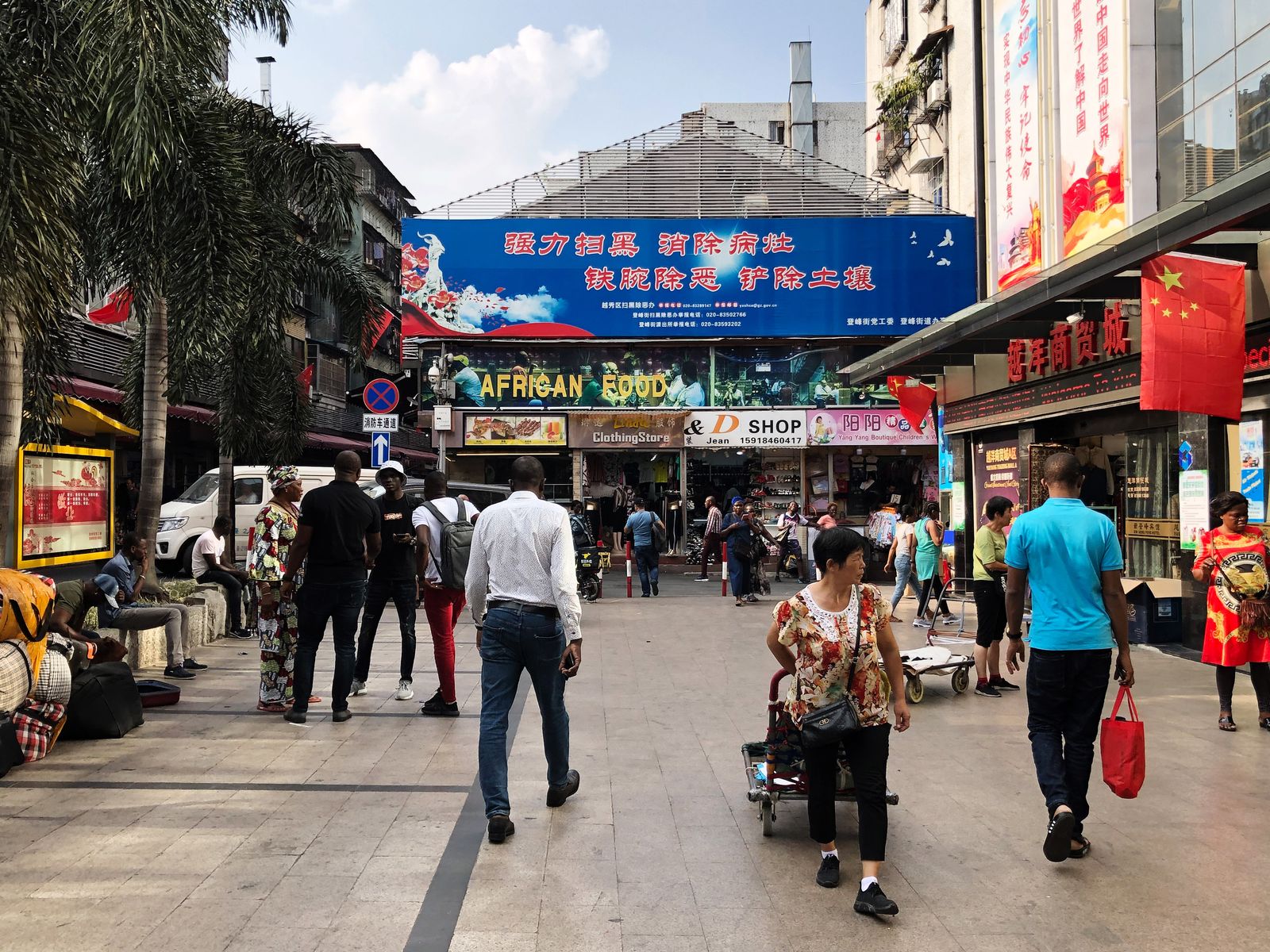 A street in Guangzhou's Xioabei neighborhood