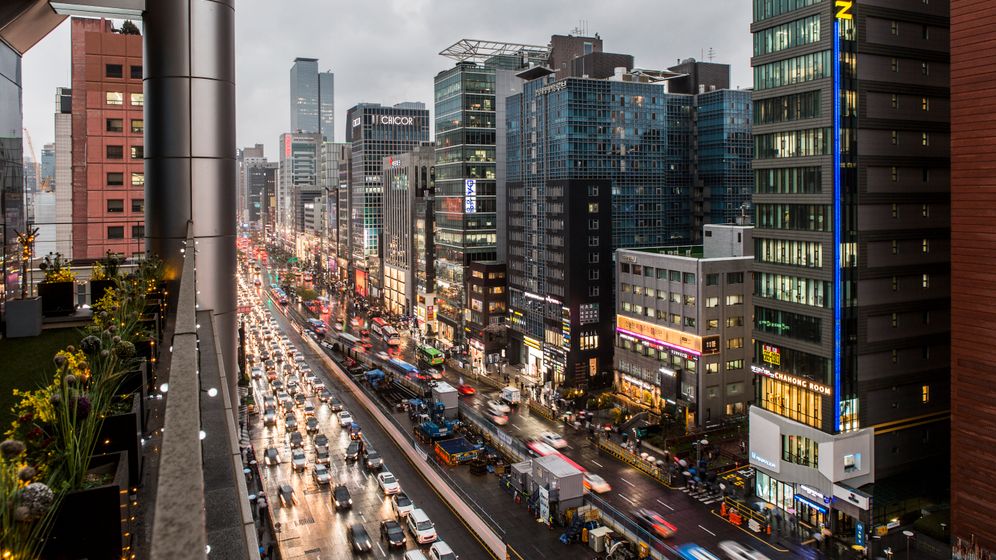 It's been a few years since Park Jae Hun has had a relationship, but he hopes that's all about to change. After all, he's been doing what he can to improve his prospects.

He's already had surgery on his eyelids and nose. Now the contours of his chin will be enhanced, and the corners of his mouth corrected to point upwards, so he'll look friendlier. Park says that he'd like to have a beautiful girlfriend, adding: "Maybe this will give me better chances."

Park, 29, is sitting in a café in the South Korean capital Seoul. His hair is thinning, so he sometimes wears a hairpiece, as he is today. After coffee, he'll head over to the clinic for his appointment.

When asked what he likes about his looks, Park can't think of anything. He says he's been more confident about approaching people since he started video blogging two years ago. But, he adds, he liked his appearance less and less.

The pressure to look good is enormous in South Korea. Improving ones looks is expected, especially in the cities. Many now opt for the "petit seonghyeong," or "minor procedures," like Botox injections and fillers to shape their faces.

Koreans regularly head to the beauty clinic to improve their chances at job interviews, for example, because attractiveness is so important on the labor market. "This also reflects the attitude of Koreans toward their own bodies: This might be beneficial to me so I might as well do it," says Joanna Elfving-Hwang of the University of Western Australia, who has produced several studies on the issue.

A screen displays the areas of the face to be treated.

"In the West, the many cosmetic procedures in Seoul tend to be framed as a lack of moral fiber," says Elfving-Hwang, who has also lived in Frankfurt. "In Germany, if you want to have surgery, you have to make a big psychological case: I've had this traumatic experience, someone called my nose too big. I'm doing this for my psychological well-being."

In Seoul, by contrast, some clinics offer lip injections during the lunch break, with 30 minutes of preparation, 10 minutes of injections, and that's it.

Park Jae Hun's procedure doesn't take long either. Once the anesthetic cream has taken effect, he lays down on a treatment recliner, surrounded by the calming beige of the decor. The doctor makes 10 injections around the lips, and after nine minutes the mouth corners have been lifted. After another four minutes, the procedure on the jaw is over.

Park puts on a black dust mask to cover the lower part of his face. When asked if he feels different, he just laughs. Doctor's appointments like these have become routine for him. Later, he'll rave on the internet about the clinic and, in return, he won't have to pay for the procedure.

The entrances to many clinics are meticulously designed, and some look like hotel lobbies.

The online reviews are vital because the clinics are in fierce competition for customers. In some streets of the affluent Gangnam district, almost every high-rise building has one or more centers for aesthetic procedures. The entrance areas, with their marble counters and leather sofas, look like hotel lobbies. And there is more than the usual number of people there wearing dust masks, even though the air is clean.

More cosmetic procedures are performed per capita in South Korea than anywhere else in the world. The country has 2,330 practicing plastic surgeons, giving it the most cosmetic surgeons per capita of any country in the world. In apps such as Gangnam Unnie, users can upload photos of themselves and get advice from clinics online before they opt for a procedure.

And it's not just the locals in South Korea who want to improve their looks. At the Seoul airport, a counter welcomes medical tourists from all around the world, although most of them come from China. The annual number of foreign visitors who travel to South Korea for cosmetic surgery saw a year-on-year increase of 37 percent in 2018. Some packages include shuttle service from the airport, and tour guides are offered in addition to the medical procedure. All this has earned Seoul the moniker of "plastic surgery capital of the world."

The Gangnam district in the capital Seoul is considered the heart of the South Korean beauty industry.

Most operations in South Korea are performed on noses and on eyelids - so-called "double eyelid surgery." Risky chin surgery is also becoming increasingly popular. But perfect is often not perfect enough: The latest trend is to have implants inserted to make the head rounder and improve the profile.

"Some 20-year-olds show me a picture of a pop star and say that's how they want to look," says Rhee Byung Jun, who works as a cosmetic surgeon at BK Plastic Surgery. The Korean beauty ideal is perhaps best exemplified by these young stars with their fine -- often surgically enhanced -- facial features, their porcelain skin and shiny hair. Still, says Rhee, he declines to perform some operations.

Advertising for the clinics figures prominently at the entrance to the Sinsa metro station. The doctors who perform the procedures are often shown in the advertisements.

The metro stations in Gangnam are plastered with advertisements for the clinics, but some Koreans feel that things have gone too far. After over a thousand complaints that the ads convey an "unhealthy, distorted physical image," according to a local paper, the Seoul metro canceled its contracts with many advertisers.

Feminists in particular have long been vehement in their denunciations of the new aesthetic ideal, contending that it's part of a culture that is geared to men's needs, objectifies women and conveys unrealistic body images.

According to clinics, 80 percent of their clients are women. The "older ones" tend not to take their cues from pop stars, but instead primarily focus on measures to combat aging. Starting in their mid-30s, Korean women rely on Botox injections and fillers to look younger.

Still, an increasing number of men are also getting caught up in the beauty industry. Good looks and fitness are becoming increasingly important, especially for younger men, says Professor Elfving-Hwang, who notes that "K-pop aesthetics make it acceptable -- young men are now allowed to care about their looks." And, she says, they're willing to invest a lot.

Like 33-year-old Park Tae Ha who says: "I want to look natural. But I also want to look better than others." He's been dieting off-and-on for years, has broad shoulders, precision-cut black hair and smooth skin. Extremely smooth skin.

He started with Botox four years ago and has had another five injections since then. He's also had his face laser-treated 20 times. He's been injected four times in the jaw area.

Park Tae Ha is also having his skin treated with ultrasound.

On a day in early April, he is sitting with a hot and throbbing face in the "VIP room" of the Yonsei Nanum Clinic. He's been injected again to look more symmetrical, firmer and more distinctive. He's had his skin treated with laser flashes and had it lifted with ultrasound. The effect lasts for a year, and when it fades Park intends to return, even though it's painful.

A few kilometers away at the Gyul Clinic the following day, doctor Choi Chul is busy practicing "Loc 'n' Roll," a term he coined himself. It's a combination of "V-Loc lifting," in which the skin is lifted by threads, and "needle shaping," in which the facial skin is made to appear rejuvenated using acupuncture needles and electric current.

Kim Myeong Hye, 59, a housewife from Seoul, is stretched out in front of him on the operating chair. Nearly all her friends take Botox for wrinkles around the eyes and on the forehead. One of them recommended that she have the procedure she is now undergoing.

Kim Myeong Hye examines herself in the mirror after her treatment.

"Women should always make an effort to maintain their appearance," Kim says before her treatment, adding: "I'll be doing this for the rest of my life." She wants to enjoy her retirement, she says, noting that Koreans tend to live long lives. For her, that includes discovering new hobbies, playing golf -- and investing in her own appearance.

Kim often talks about beauty with her 41-year-old daughter and may recommend the "V-Loc lifting" to her as well. Her youngest already had her eyelids operated when she was in her early twenties. "The sooner you have the surgery, the better," says Kim, "because then you can enjoy your new face for longer." 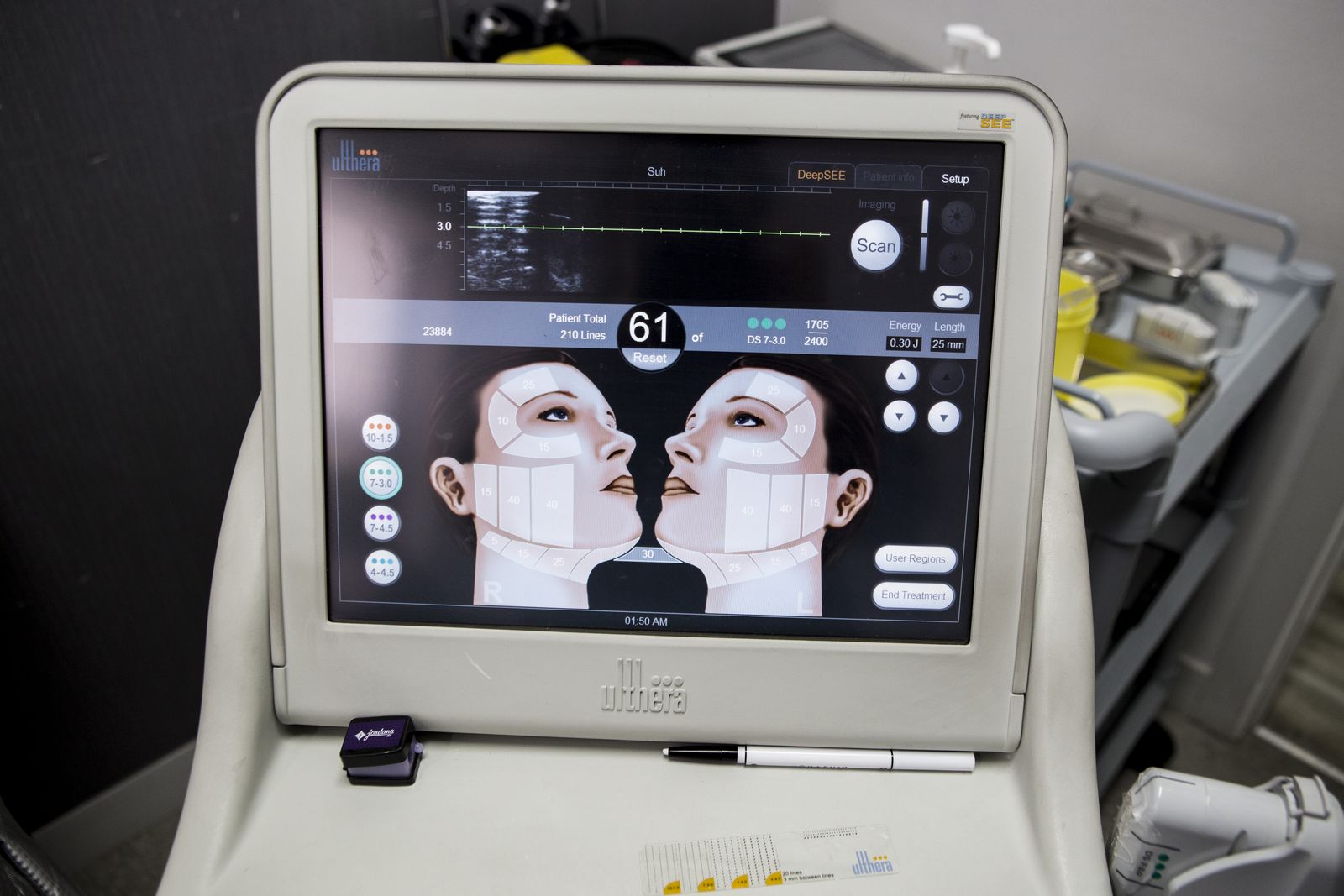 A screen displays the areas of the face to be treated.