Once the war came to an end, former Vietcong fighter Nguyen Van Bat fathered four children. Three of them suffer from memory loss, as does he. The fourth, Nguyen Thanh, spends most of her time in bed staring into nothingness.

Nguyen Van Bat, 69, is sitting in the living space of his bungalow in the city of Bien Hoa, around an hour's drive north of Ho Chi Minh City. He is barefoot and the pattern of his shirt has faded. It smells faintly of sewage in the semi-open room and clothes hang in garbage bags above shared beds. The family is unable to afford wardrobes: They must bear the costs of caring for their disabled children largely on their own.

The aid they receive from the state is minimal, even now that both granddaughters are also suffering from memory loss, the result of a genetic defect that is, according to official certification, most probably the result of Agent Orange. The U.S. deployed more than 45 million liters (12 million gallons) of the dioxin-based defoliant in Vietnam between January 1962 and January 1971, in addition to 27 million liters of other herbicides. Much of it was sprayed onto the forests of the southeastern part of the country near the Cambodian border where Nguyen Van Bat was once stationed.

Named after the color of the labels on the barrels, the U.S. used the herbicide to thin out the jungle that provided the Vietcong guerillas with protection and nourishment. Dioxin seeped into the soil and groundwater, and from there into food -- and continues to cause genetic defects today.

Those who were exposed to Agent Orange are three times as likely to give birth to handicapped children, with deformities potentially continuing for six to 12 generations.

And being born with a disability in Vietnam often translates into a life of poverty. The government in Hanoi provides only very low benefits, if any at all, and until recently, the U.S. government hardly contributed anything to the 3 million Vietnamese victims. 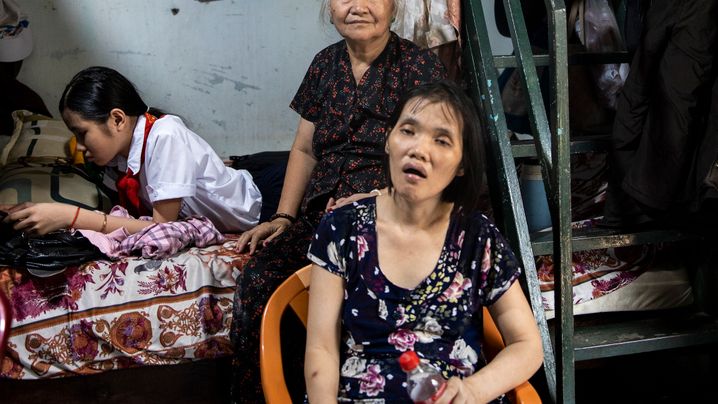 Photo Gallery: Living with the Scourge of Agent Orange

But now, 44 years after the end of the war, that is about to change. The U.S. is interested in partnering with Vietnam against the rising global power of China and has offered Hanoi new political concessions.

One of those is the cleanup of the Bien Hoa air base, a former storage site for Agent Orange and a place with dioxin values of up to 1,000-times higher than internationally accepted norms. The plan calls for the base to be dioxin-free in 10 years. In addition, the U.S. plans to boost benefits paid to Vietnamese victims of the chemical.

"The fact that two former foes are now partnering on such a complex task is nothing short of historic," said U.S. Ambassador to Vietnam Daniel Kritenbrink at a late-April press conference announcing the cooperation.

But some of those affected by the toxin have a different view.

In the stadium of Bien Hoa, just a few kilometers from Nguyen Van Bat's bungalow, Nguyen Kien, 39, fastens his contorted legs into the specially designed harness of his wheelchair. With long, powerful arm thrusts, his muscular upper-body bent low over his knees, he drives his Moon MN 089 forward, his eyes focused on his lane and his mind focused on his ultimate goal: the regional championships in the city of Can Tho on the banks of the Mekong River. The prize money would provide a significant boost to the paltry benefits he receives.

So far, Nguyen Kien's 100-meter personal best is 18 seconds. Some of his opponents can do it in 17.5, but they also have better wheelchairs, he says, with extra-narrow wheels and less friction. And those chairs are up to 10 times more expensive than his Moon 089. But he hopes to beat them anyway.

Nguyen Kien is used to being at a disadvantage and pushing through anyway. His entire life has been like that -- an uneven competition.

Each month, he receives the equivalent of 57 euros ($64) in disability benefits from the Vietnamese government, around a third of the average salary in the country. In addition, he earns a bit of extra money by selling lottery tickets, but has been unable to find a better job. His disability is one important reason why he never went to school and is unable to read.

Nguyen Kien's thighs are covered with scars, the leftovers from an unsuccessful operation in 1982. When he was three years old, doctors tried to straighten out his legs, but they failed -- and the gentle, frail boy with the crooked torso and twisted legs remained disabled, becoming a significant financial burden for his mother Vú and his veteran father Mai.

In 1984 -- Nguyen Kien was five years old at the time - the U.S. researcher Richard Albanese of the Air Force School of Aerospace Medicine made a far-reaching discovery, finding that American Vietnam War veterans who had been exposed to Agent Orange were far more likely to give birth to children with disabilities. His superiors initially refused to release the report and it was only made public shortly before Nguyen Kien's ninth birthday as a result of pressure from the U.S. Congress.

Yet it would take more than a decade, until 1996, before the U.S. government would recognize spinal cord defects as a direct consequence of exposure to Agent Orange. And even then, only American veterans and their families received benefits. The Vietnamese Association of Victims of Agent Orange (VAVA) sued the chemical's producers Dow Chemical and Monsanto, but a court dismissed the lawsuit, ruling that Agent Orange had not been a banned toxin at the time of the Vietnam War.

In 2003, Nguyen Kien won two silver medals at major competitions along with several million dong in prize money. Photographs from the time depict Nguyen Kien, his face radiant, being presented with his medal as he raises his arms in triumph -- a young man who, in a race that didn't even last 20 seconds, gave himself something that the state had long denied him: the opportunity for a better life.

Since 2005, he has received a bonus of 120 euros a month from the Vietnamese Culture Ministry for his sporting achievements. And every now and then, he still wins a bit of prize money in minor races.

Three months ago, Nguyen Kien married a seamstress from Ho Chi Minh City whom he met at a sporting event. They would love to have children, but he's not sure if he wants to take the risk. 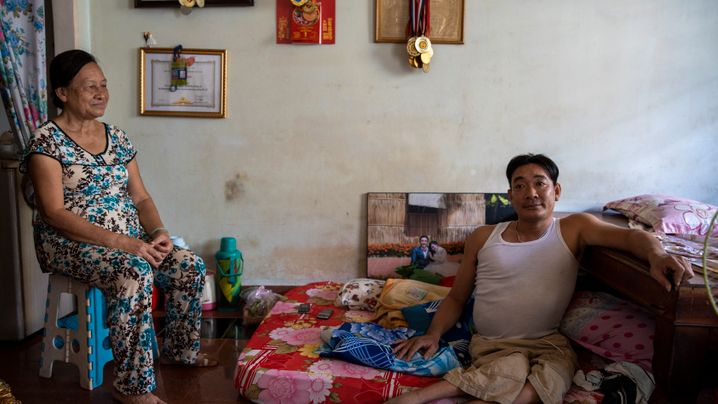 In 2014, the last year for which there are official statistics, the Vietnamese state paid disability benefits to around 286,000 war veterans and their descendants, with the average payout being the equivalent of $67 (60 euros) per month. The 465,000 Agent Orange victims who were not part of the war effort and their oft-handicapped children don't even get that much.

They tend to be dependent on sporadic aid payment from organizations like the Red Cross or VAVA and often live in dire poverty. It is still frequently the case that deformed babies are deposited in the courtyards of specialized orphanages because parents can't afford to care for them.

Parents of children that live with only slight disabilities, on the other hand, often take a different strategy: They try to hide their children's disabilities.

In the family of former Vietcong fighter Nguyen Van Bat, only he and his severely disabled daughter receive state benefits. The other three daughters work in a factory where it's not as obvious that they frequently forget things. Nguyen Van Bat hopes that ultimately, other men will end up caring for his daughters, but thus far, only the oldest -- the one least affected by disabilities -- has married.

She and her husband have two children. And it was a difficult blow for the family when the girls also developed signs of the same kind of brain damage as that suffered by their mother and grandfather.

Nguyen Van Bat's granddaughters are lying on the bed next to their severely disabled aunt and are watching videos on an old smartphone. When his other daughters are at the factory and his wife Vú is selling vegetables at the market, Nguyen Van Bat is often alone with the three of them. He cooks for them, plays with his grandchildren and feeds and washes his listless daughter.

Everyone in the family has to make their contribution, says Nguyen Van Bat. When asked whether he feels left in the lurch by the state, he dodges the question: "A soldier always endures his fate," is all he says.

Nguyen Van Bat has, of course, heard of the American plans to invest at least $183 million to clean up 150,000 cubic meters of soil at their old base in Bien Hoa. He has also heard that the Americans haven't yet said exactly how much money they plan to make available to Vietnam's Agent Orange victims.

The veteran doesn't believe that his family will see much at all. But he is happy that the contamination at Bien Hoa will be removed and that no more families will be made to suffer the disabilities that have plagued his own -- even if his own great-grandchildren may ultimately suffer from the same brain damage as he does. 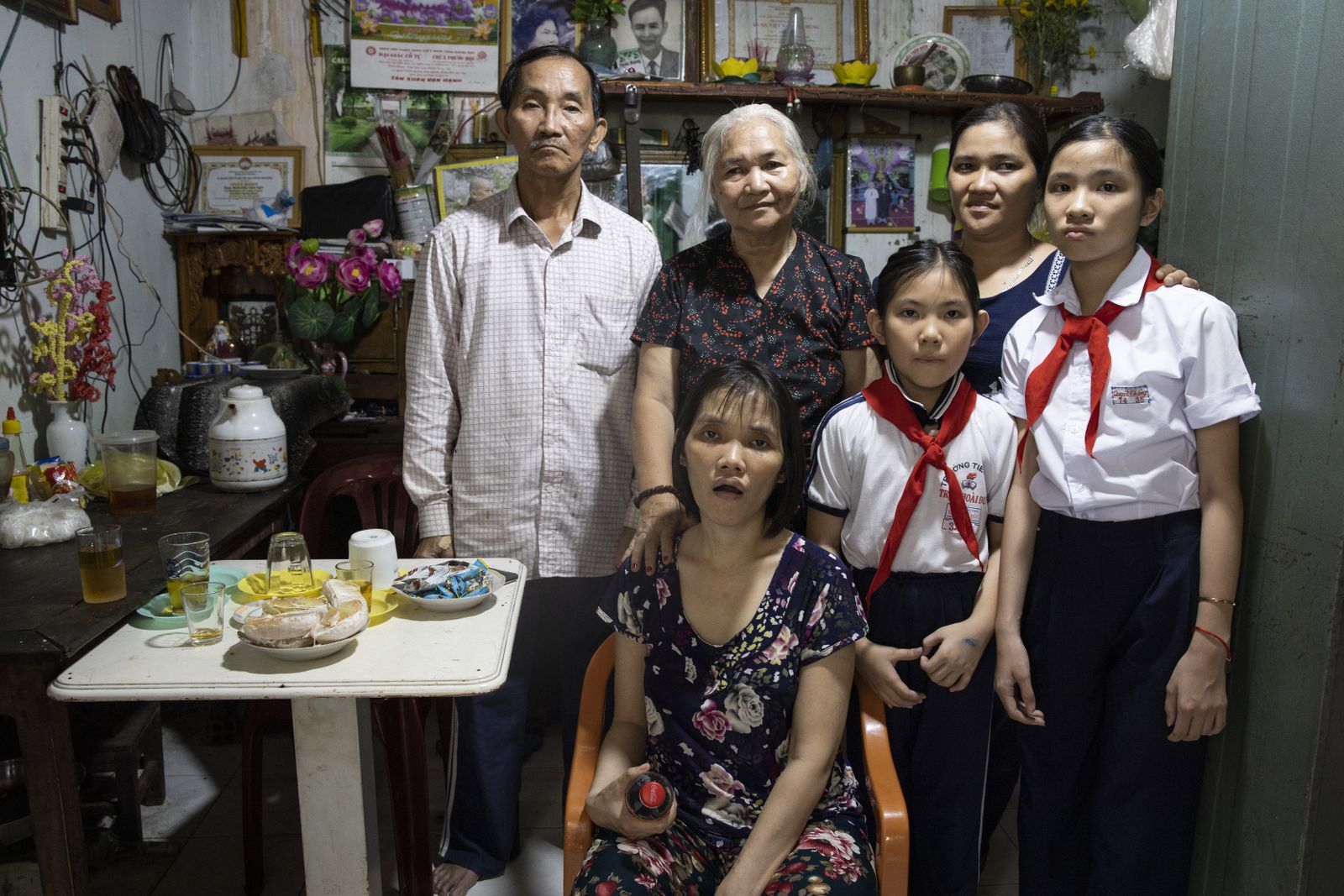 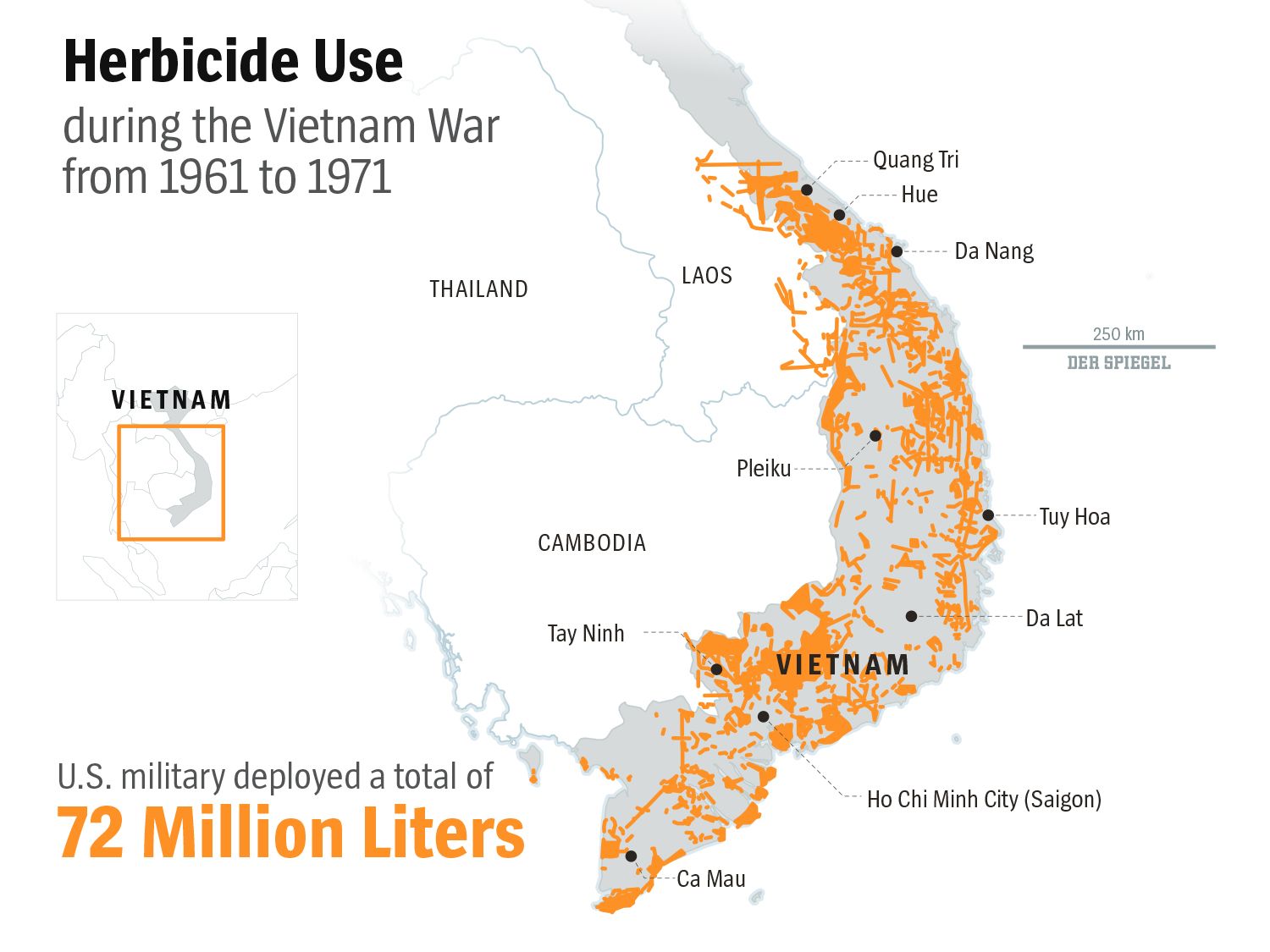 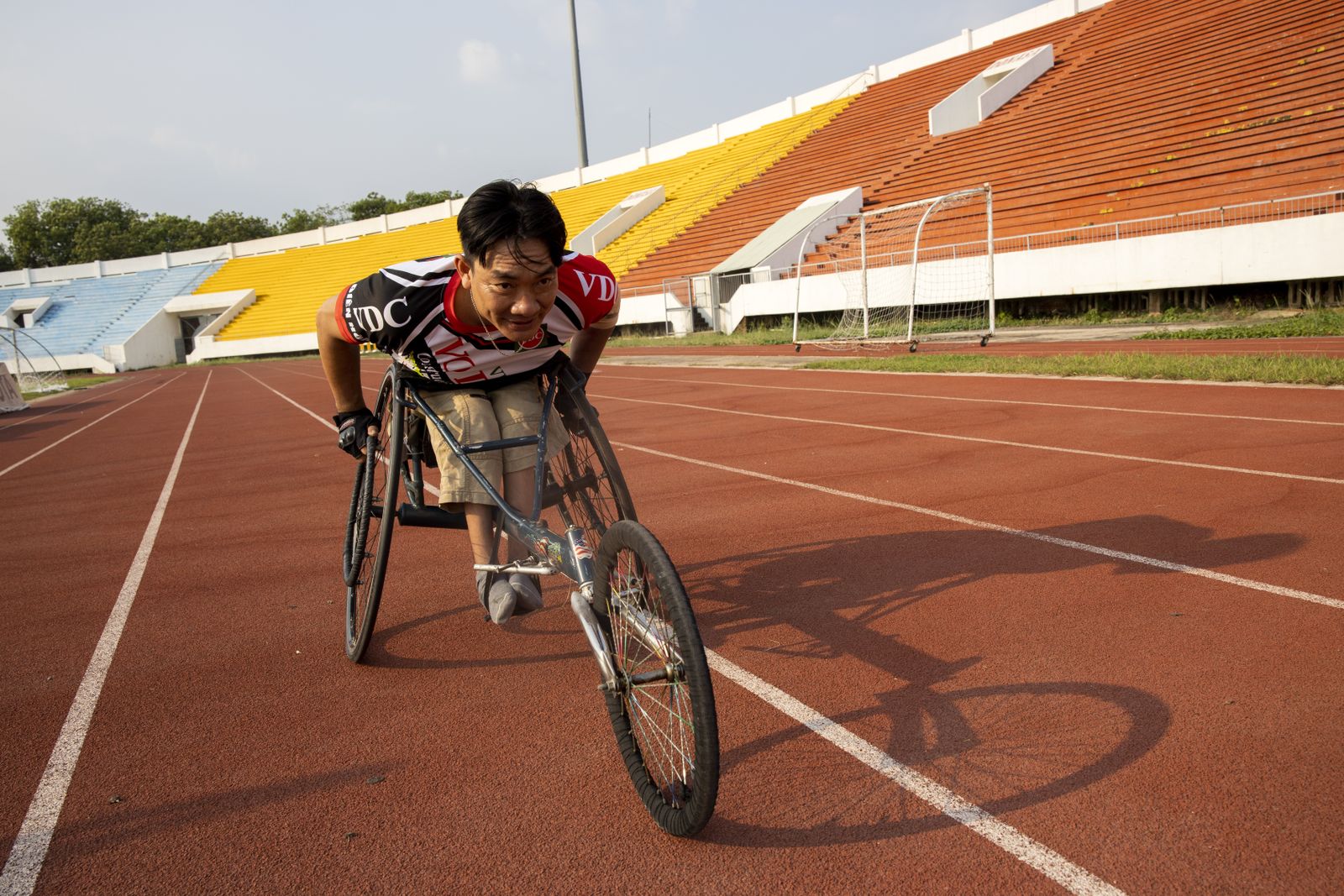 Nguyen Kien in his Moon MN 089 preparing for the upcoming race. 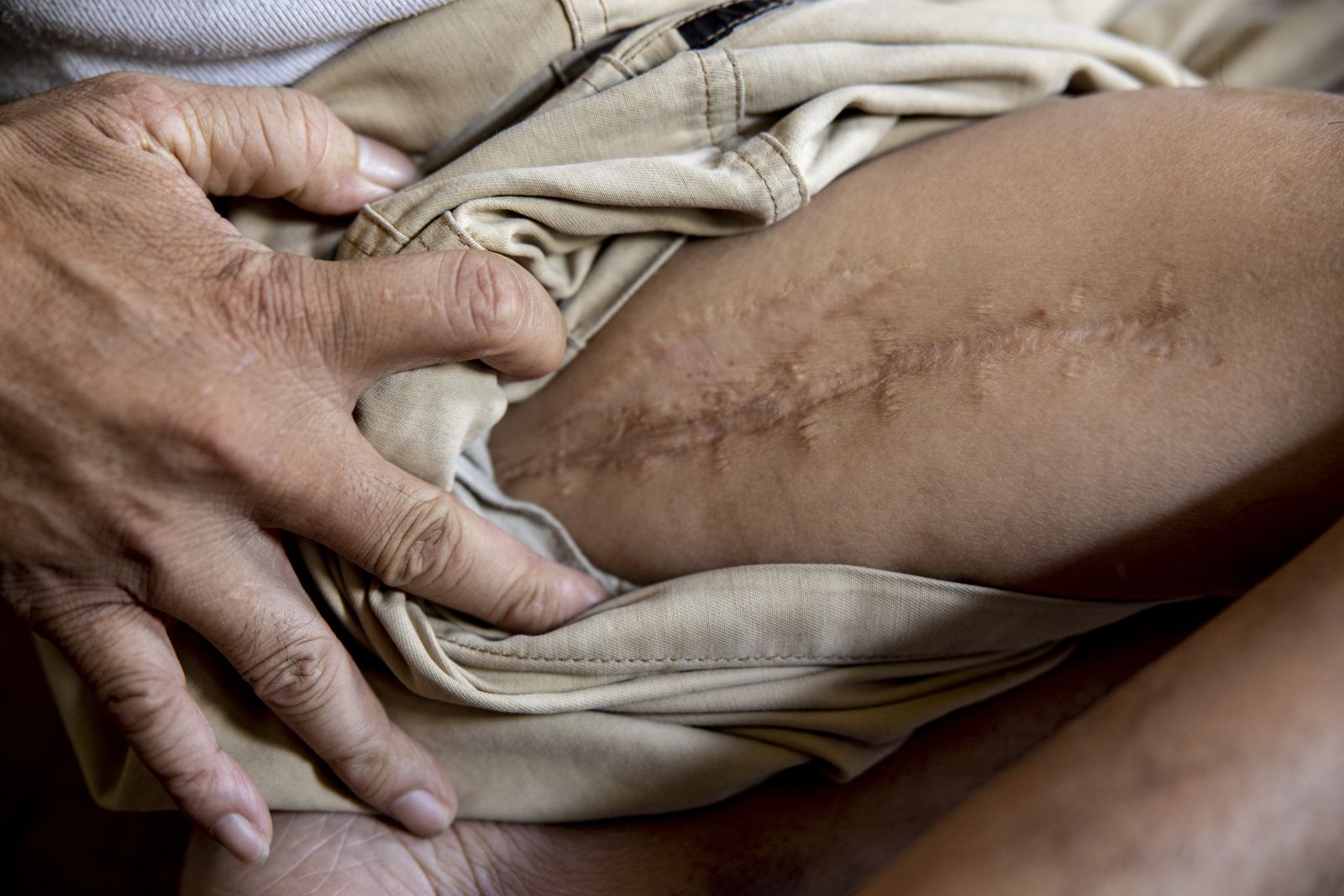 Nguyen Kien had an operation to straighten his legs when he was a boy, but it was unsuccessful. 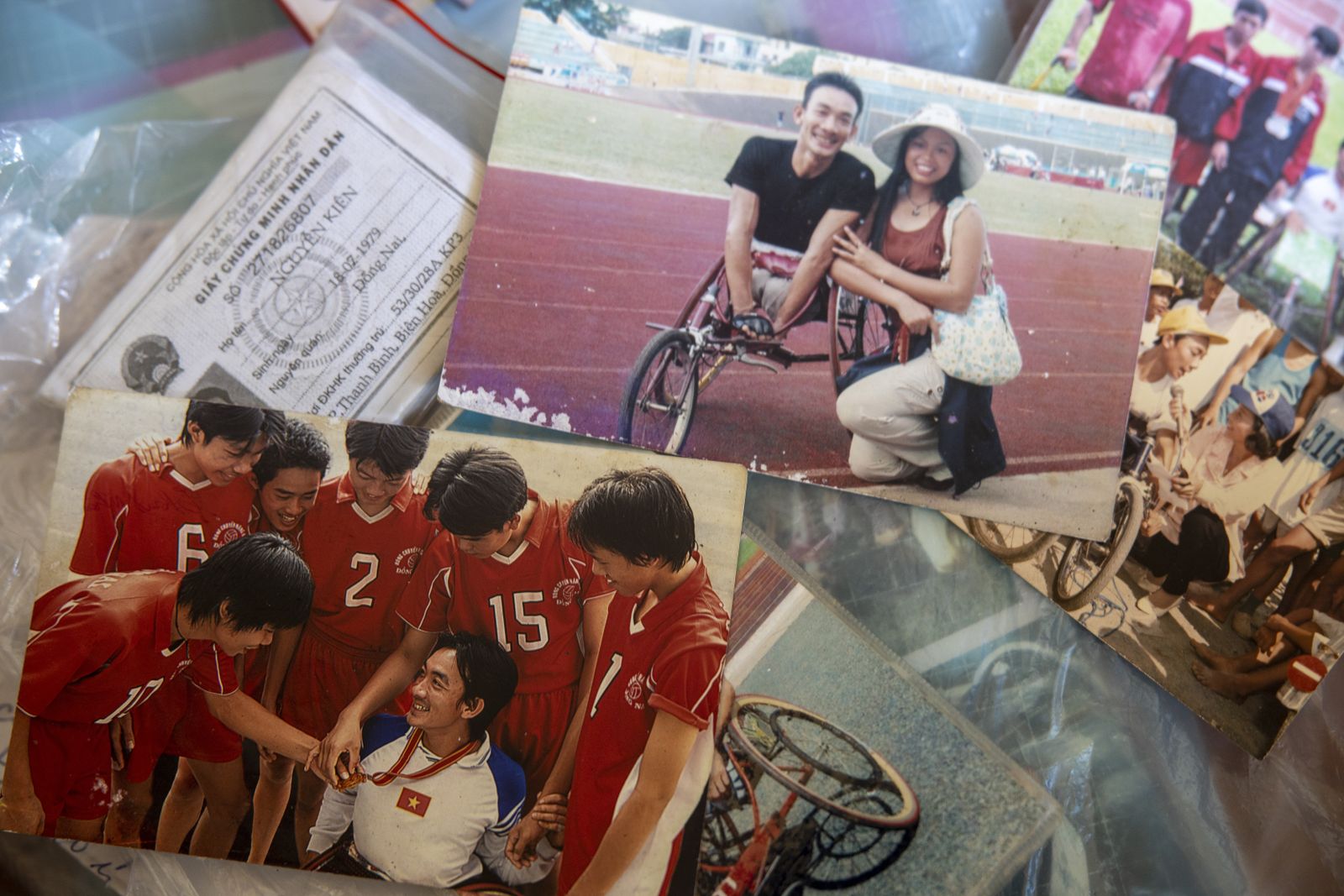 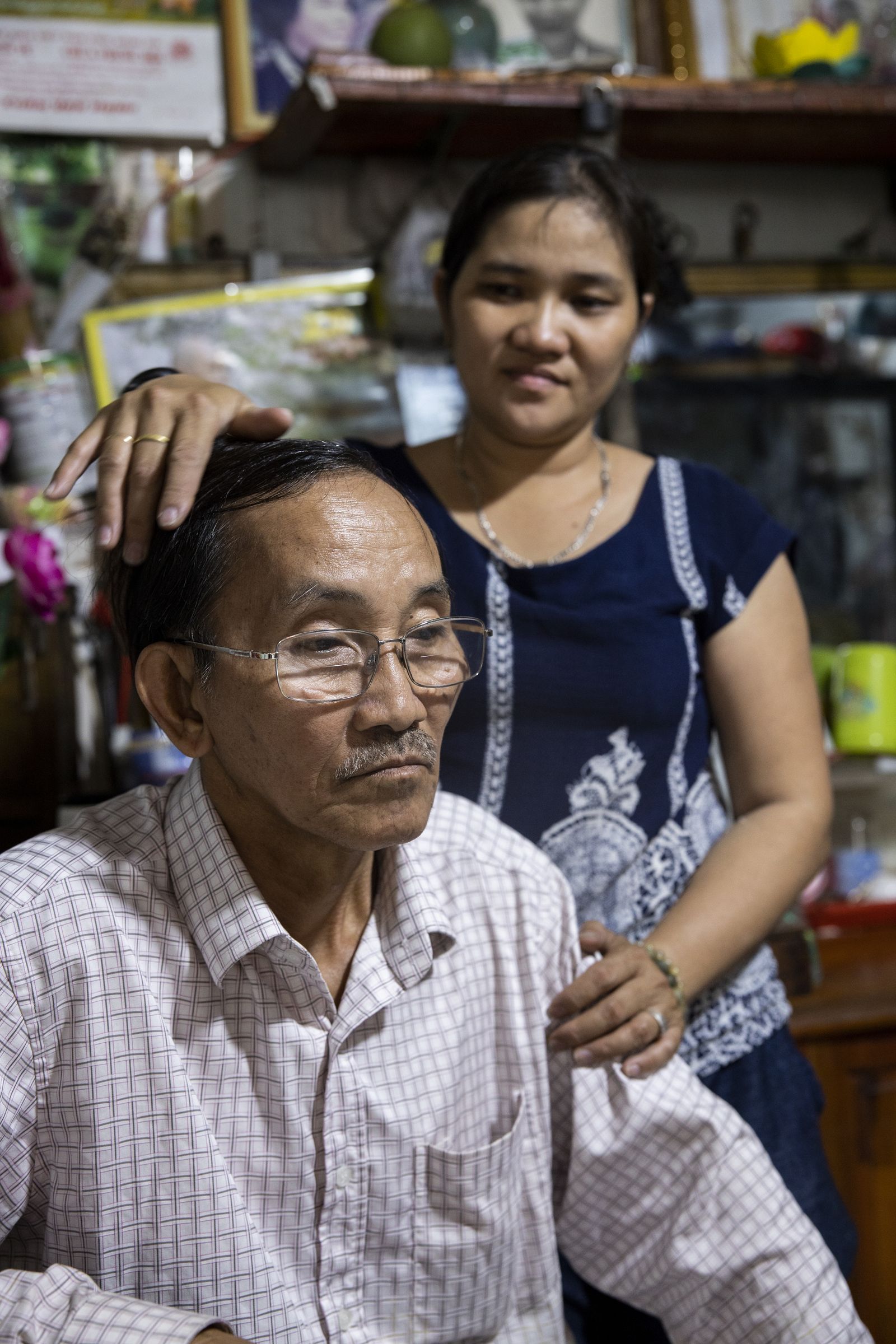 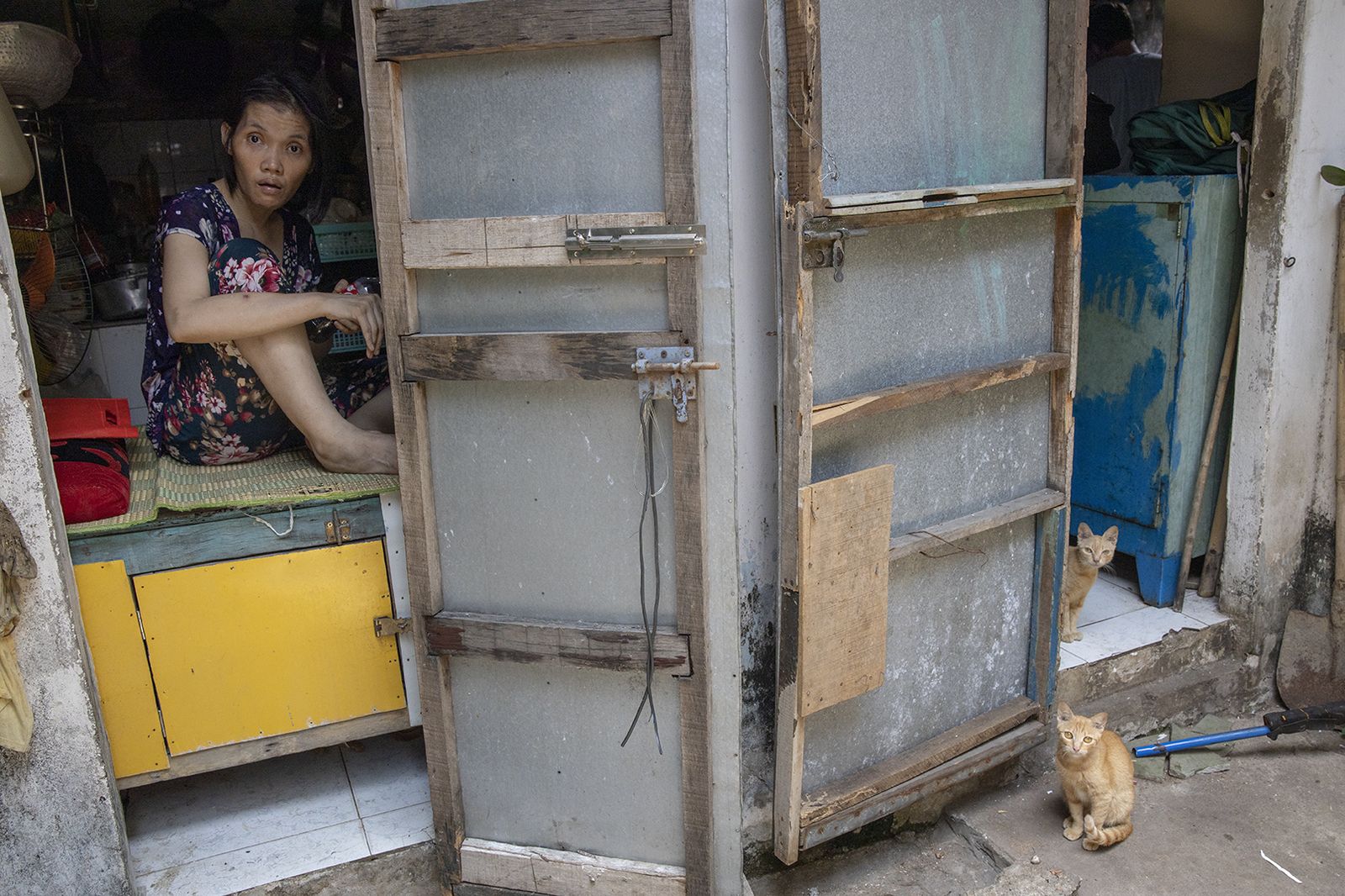