On a recent Friday evening in Berlin, members of the lost generation flock into a room at the Instituto Cervantes, the Spanish cultural institute, for an eagerly awaited information session. The roughly 50 Spaniards in attendance, most of them under the age of 40, include physicians, tradespeople and academics. The greatest share of them emigrated to Germany after the Spanish financial crisis erupted in 2008. Now, they want to return to Spain -- to a country that, just a few years ago, gave them no hope of making a decent living.

On stage is Raúl Gil Benito, who has come to speak on behalf of his private organization "Volvemos," Spanish for "We are returning." Gil organized the event and he has invited senior Spanish official Agustín Torres to join him. The socialist government in Madrid is working together with Volvemos to win back the lost generation and make their return to Spain as smooth as possible, with services like Skype consultations, training courses and financial assistance.

One of the first questions asked: "Who will help us if we want to go back just three weeks from now?"

Things are changing on the Iberian Peninsula. Young people who fled mass unemployment a decade ago are now going back home, with 83,728 Spaniards returning from abroad in 2018 alone. For the first time since the height of the financial crisis, Spaniards returning to the country now outnumber those leaving. Volvemos has helped more than 600 people return to Spain.

Neighboring Portugal is experiencing a similar development. During the crisis, half a million Portuguese left the country -- a major exodus for a population of just 10 million. But since 2017, the number of returnees has once again exceeded the emigration figures. Now, the government has launched a program that offers returning émigrés a tax allowance and up to 6,500 euros ($7,200) in initial financial assistance. Those wanting to start their own business receive a loan.

Both countries have been waiting years for this turnaround. They are currently experiencing an economic upturn and their economies are growing again -- Spain for the fifth year in a row. Portugal has 30,000 job vacancies, and unemployment is down to 6.5 percent, the lowest rate in 15 years.

The country is considered hip, with Lisbon making a name for itself as a start-up hub. Although youth unemployment is still high and many of the new jobs are only temporary and poorly paid, Spain and Portugal can again offer excellent prospects to their well-educated citizens, including the future elite of the Iberian Peninsula, university students who in recent years have been choosing to pursue careers in places like London, Paris and Berlin instead of back home.

Iren Sánchez, 26, is one of those. Sitting in a café near the Prado Museum in Madrid, the stylish and smiling Sánchez tells the story -- in almost accent-free German -- of how a town in the Black Forest changed her life.

Sánchez moved to Villingen-Schwenningen in 2015 as part of the Erasmus program, an exchange stipend for university students in the EU. Back home in Madrid, she had been majoring in event management and her intention was to return, but the Spanish property bubble had long since burst and the job market was a nightmare. So, with the chances of finding a good job in Germany looking much better, she decided to stay. "I had to move on," she says, "because I didn't know whether Spain was going anywhere."

In Villingen-Schwenningen, Sánchez attended university, completed internships and later earned a master's degree in Berlin. She lived in the home of an elderly German couple, shifted her lunch break from 2:00 p.m. to noon, and learned German: A1, A2, B1, B2, C1 -- important milestones in the life of an immigrant.

Sánchez wrote her final thesis at Daimler and was subsequently offered a job by the Stuttgart-based automaker. She designed digital marketing campaigns for the strategy department and earned good money, more than in Spain. It was, in short, a dream job.

Her coworkers were also great. "The time I spent in Baden-Württemberg was perhaps the happiest in my life," Sánchez says. Even today, she reads books in German. "It's become an indelible part of my personality," she says.

Harnessing the Knowledge of the Returnees

When Agustín Torres says that Spain stands to benefit from the returnees, he is speaking of people like Irene Sánchez who, he says, have learned a great deal abroad and demonstrated tenacity. His hope isn't just to stop brain drain, but to reverse it -- and put it to work for Spain. It is a vision he has codified in the 50 measures of his "plan de retorno," which his government intends to fund to the tune of 24 million euros. A pilot project has already been launched.

Portugal also needs the returnees so it can avoid falling behind. The country's population is shrinking, with a birth rate that ranks among the lowest anywhere in Europe. The healthcare system in particular already faces a shortage of trained personnel.

Tiago Loureiro has used this to his advantage. The wiry 36-year-old with a touch of gray around his temples recounts how he found regular employment in the small town of Santiago do Cacém, right in the heart of the sparsely populated and once dirt-poor south of the country, just a two hours' drive from Lisbon.

When the Portuguese government was forced to slash the healthcare budget during the crisis years, the male nurse's professional experience and university degree didn't help him. So Loureiro packed his bags in 2015 and headed for the Northern Irish capital of Belfast, where one of his three brothers was already earning good money at a clinic that was also interested in hiring him. Smiling to himself, he recalls the salary: 3,000 pounds in net income, the equivalent of 3,500 euros. A new apartment was also reserved for him in the center of town -- for just under 500 pounds a month in rent.

And yet: "I wasn't happy there." The food and the cold weather were big drawbacks for him, and he found it difficult "to gain a foothold in Northern Irish society." After all, he wanted to establish a family. "I've always wanted to return," he says.

After applying for jobs everywhere in Portugal for a year, he finally received an offer for a permanent position. It's not perfect: He's not living near his parents in northern Portugal as he would have preferred, and he is also earning much less. After taxes, his paycheck comes to just €1,100, plus a premium for working night shifts, despite the fact that he does hospice work for cancer patients in the oncology ward.

But the quality of life, and its affordability, makes it all worthwhile for him. The beaches of the Atlantic Ocean are just a 30-minute drive away and Loureiro lives in a simple apartment building overlooking the rolling countryside. Flower pots cover the balconies. He also has two bedrooms, a bathroom and a kitchenette in the corner of an open living room with dining area and pull-out sofa -- all for €360 a month. His girlfriend works in retail shop in the town center. He could definitely imagine raising children in this peaceful environment, says Loureiro.

It is often personal reasons that drive young men and women from Portugal and Spain to return home. There's the doctor from Berlin's Charité Hospital who separated from her German husband and needs the help of her parents to raise her son while continuing to work. There's the engineer who earned good money in northern Germany but would rather grow old with his girlfriend in Spain. And there's the construction worker who could simply no longer stand the "dead Sundays" in rainy, dreary Hamburg. The economic upswing gave them all the freedom to choose something different.

For Irene Sánchez, it was a medical condition that prompted her decision. On July 19, 2018, Sánchez found herself hospitalized in Stuttgart. A few days earlier, the left side of her face had suddenly gone numb. Her father immediately got on a plane when he heard the news and was in the room when Sánchez heard her diagnosis: multiple sclerosis, an incurable disease.

"At that moment, I realized that I had to go home," she recalls. "But the disease was only what sparked the decision; it wasn't the reason." Lying in the hospital bed, she finally decided to act on what had been on her mind for months. She says it was a moment of clarity. Over the long run, she wants to be with her family, especially now that they are so worried about her.

So she quit her dream job at Daimler, which she had worked so hard to land, and spent several weeks looking for a new position, contacted Volvemos and updated her CV. After a number of coaching sessions, she received an invitation for a job interview with Daimler, this time in Madrid. Sánchez believes that her experience at the German branch gave her an edge over other candidates. She got the job. The Spanish embassy also supported her, helping her with the move and the paperwork.

These days, Sánchez does yoga every morning before she heads off to work. The money is enough for her to live well in Madrid. When she drives her small Ford on the freeway every morning, she sees the mountains surrounding the city -- and knows that she can be home again in the evening to make plans for the weekend with her family. "My disease forces me to live in the present," she says. "I now have a happy moment every day."

Sánchez has also started to coach other émigrés who want to return, and uses Instagram and Skype to tell them about her experiences. Ever since friends and acquaintances found out that she managed to return, they have been constantly bombarding her for advice.

Sánchez has only returned to Germany once, in part to visit her former coworkers. For a long time, she was anxious about her upcoming flight to Stuttgart. What if she realized that she had made a mistake? What if she suddenly regretted her decision?

"The flight was awful," says Sánchez. But when she stepped onto the gangway, all doubts disappeared. Her visit to Germany was memorable, she says. But now Sánchez is sure that she wants to remain in Madrid forever. 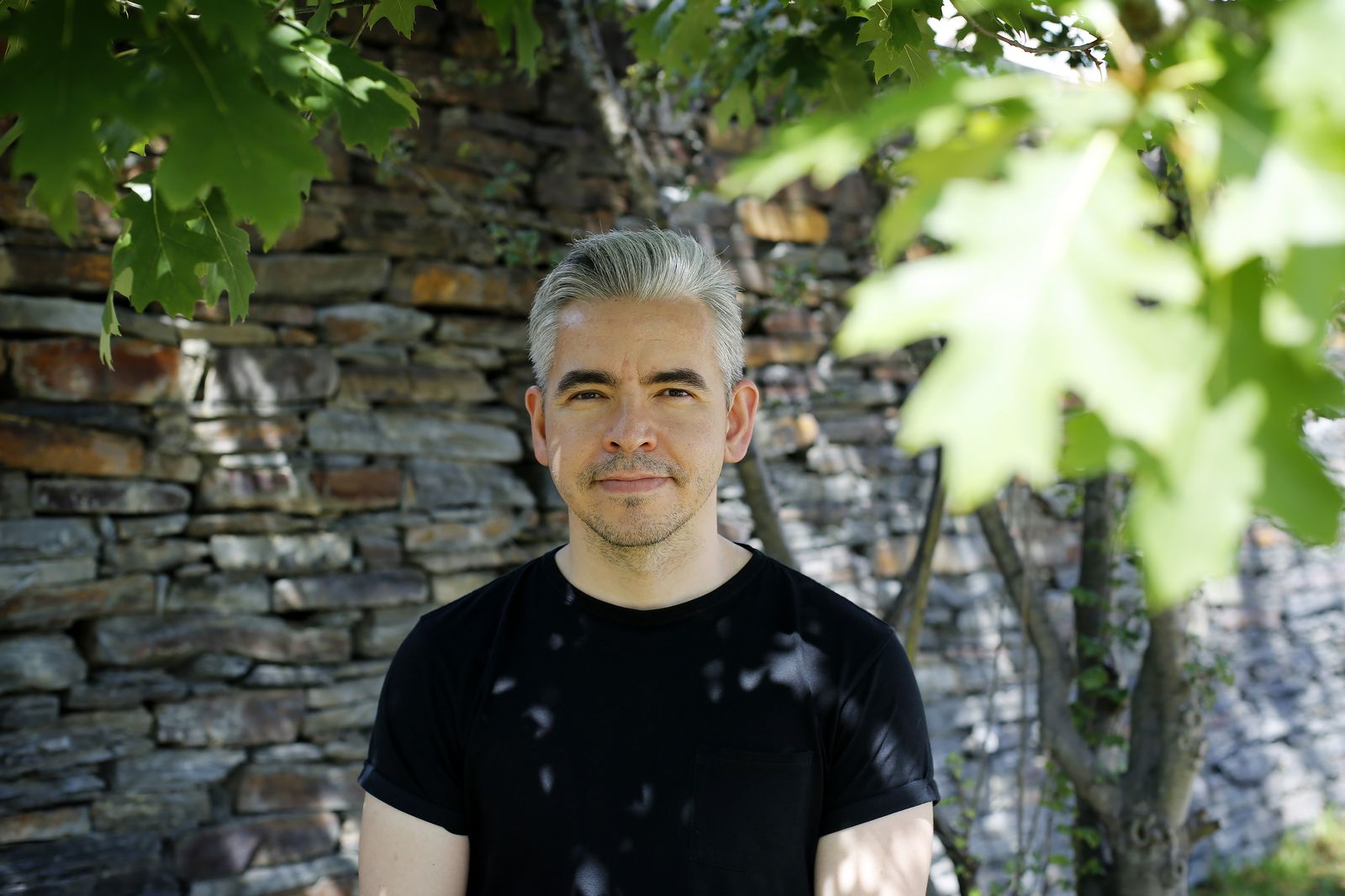 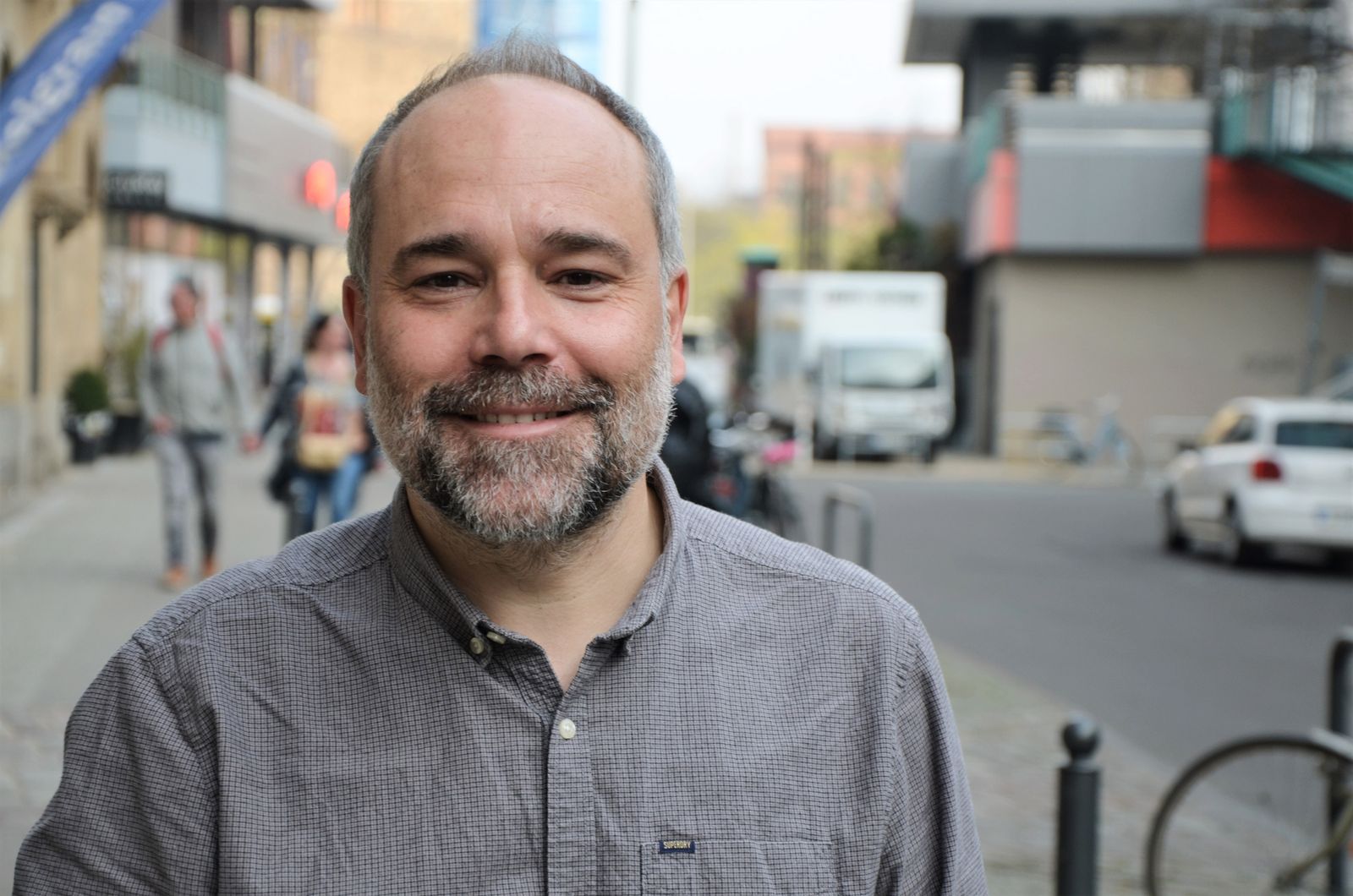 Raúl Gil, co-founder of Volvemos, himself moved to Germany during the economic crisis. 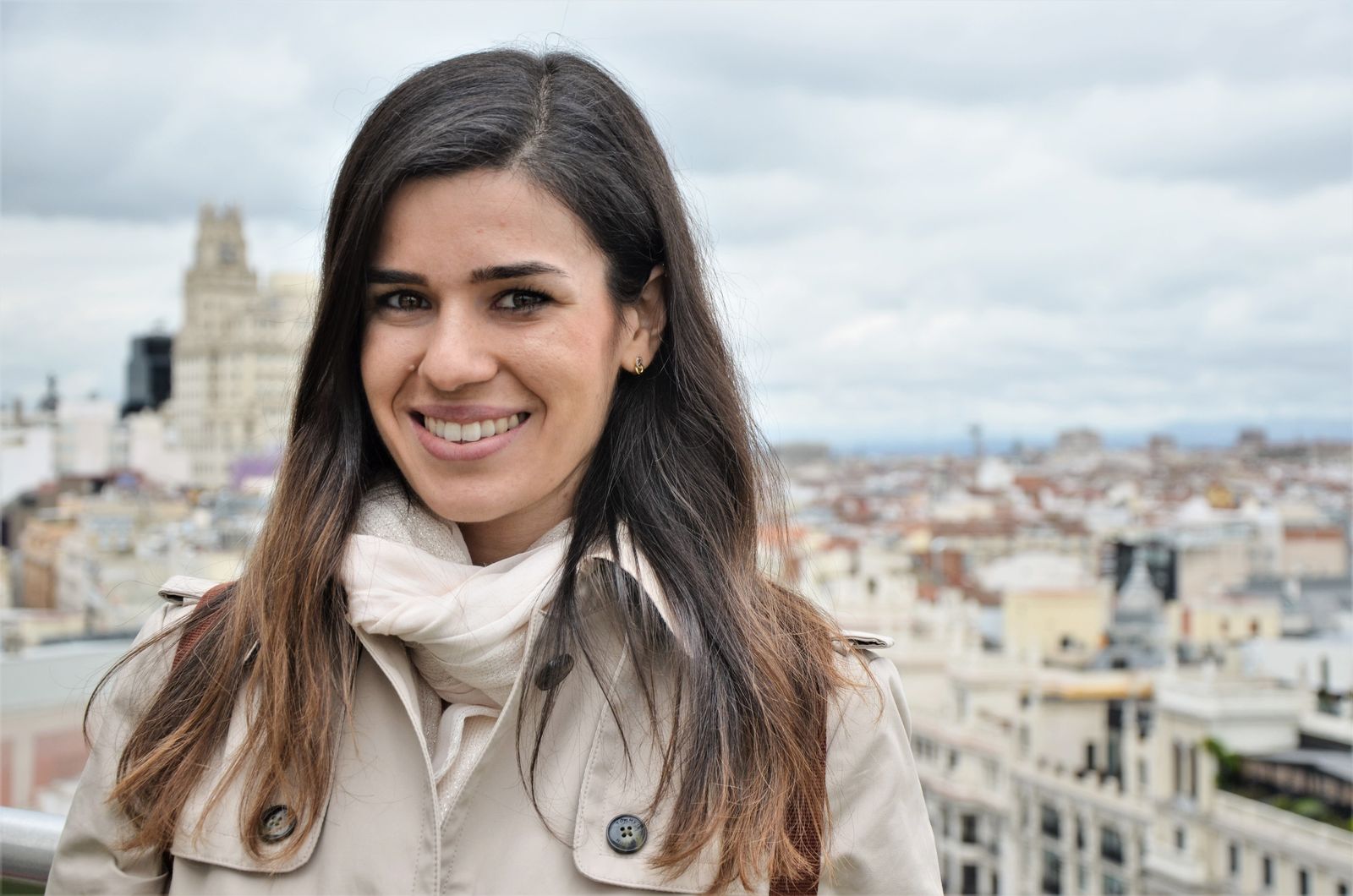 Irene Sánchez, 26, found work at Daimler in Germany before returning to Madrid. 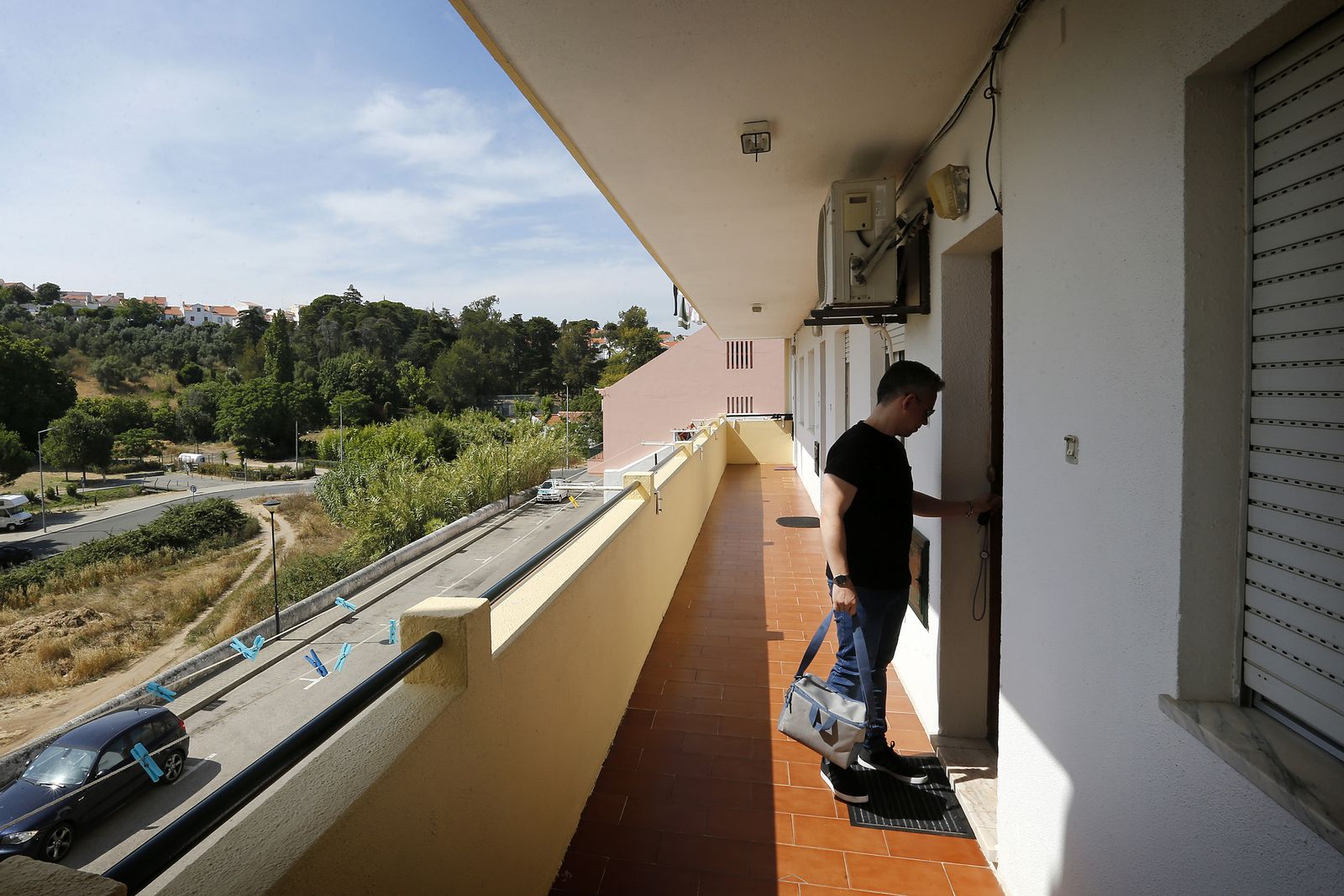 Tiago Loureiro in the entryway of his apartment, which costs only 360 euros per month 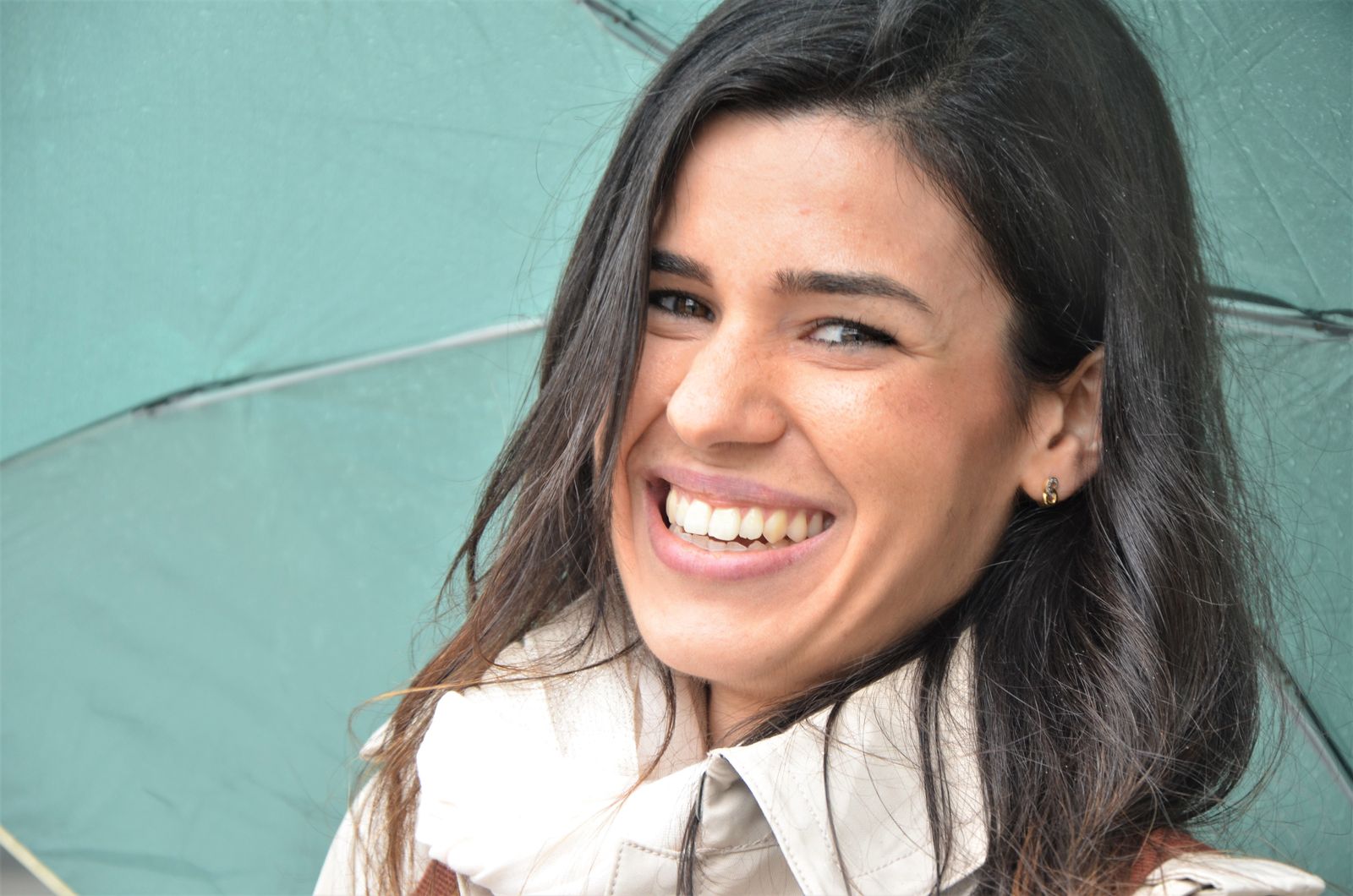 Back in Madrid, Irene Sánchez says, "I now have a happy moment every day."