Bruno the wandering bear is dead. The notorious creature was shot by hunters at 4.50 a.m. on Monday morning, near the Bavarian town of Zell in southern Germany. "The shooting has happened, the bear is dead," said Manfred Wölfl, the Bavarian government's bear expert.

After weeks of attempts to capture the increasingly cheeky bear alive, Monday was the first day that hunters had been given permission to shoot the animal. The Bavarian environment ministry had given the green light for him to be shot due to the "grave danger to people" that he posed. This was after a much-heralded team of Finnish trackers and their specially trained dogs had frustratingly failed to find the bear.

Just this past weekend there were more sightings of the brown bear. He was spotted by tourists near Spitzing Lake and three mountain bikers saw the wild animal swimming across Soin Lake. The adventurous spirits then followed him into the mountains. But when the bear turned around they beat a hasty retreat. At sometime on Saturday evening he helped himself to another sheep.

The Bavarian authorities said that Bruno was killed instantly and didnt suffer. The bear was shot from a distance of 150 meters after being trailed by three hunters who were sent when a local man spotted him and called the police.

The bear, who originally hailed from Italy, was officially named "JJ1" and was first sighted in Germany on May 20. It was the first wild bear to have been seen in Bavaria since 1835 and he was part of a program in northern Italy to reintroduce the animals in the Alps. Although he had not harmed any humans, during his month-long rampage Bruno dined on numerous sheep, and had also taken to attacking chicken coops and rabbit hutches, looting beehives in search of honey and he even snatched a 12-year-old girl's pet guinea pig. The 100 kilogram bear is estimated to have covered around 300 kilometers during his stay on the Alpine border of Austria and Bavaria, criss-crossing an area of 6,000 square kilometers. 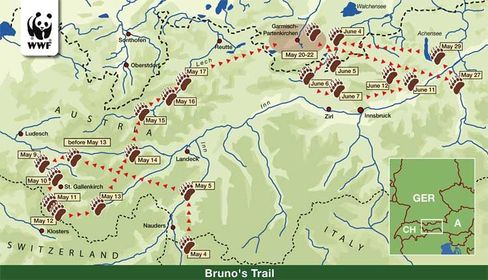 The Bavarian authorities had withdrawn permission to shoot the bear for two weeks while the Finns were attempting to track and capture the animal alive. During their search, the team covered 500 kilometers of mountainous terrain, going off the paths and scaling heights of up to 10,000 meters. When they failed to capture the bear alive, the Bavarian Environment Ministry gave the go-ahead to hunters to shoot the animal, starting this week. "Everyone knows that we would have all wished for another outcome," Bavaria's Deputy Environment Minister Otmar Bernhard said of the decision, adding that there was no other sensible way of capturing him.

The Social Democrat party in Bavaria has been sharply critical of the bear's shooting -- even going as far as to call for the resignation of Werner Schappauf, the sate's Minister for the Environment. Sigmar Gabriel, the Federal Environment Minister, said that he understood that the measure had to be taken but he wasnt sure why it hadnt been possible to tranquilize Bruno. However, the Bavarian authorities said that to do so would have required that a vet be able to get within 30 and 45 meters of the bear and this was impossible in this terrain.

The President of the German Environmental Protection Association, Hubert Weinzierl, severely criticized the shooting of the brown bear, calling it "the dumbest of all solutions." And a prominent German organization of youth who support the environment and ecology, BundJugend, also reacted with dismay, calling the killing a "tragedy for Bavarian nature protection." According to Jörn Ehlers of the nature conservation organization WWF, "Bruno found his way into our hearts, although one also had to see the danger."

Despite the bear's popularity, the failure of the Finns to take Bruno alive had led to growing concern among authorities. The bear had become increasingly fearless, coming near homes, strolling down the main street of the town of Kochel at one stage, and even sitting on the steps of its police station. Although his exploits had attracted a lot of public affection, the authorities feared that this heart-warming summer story could have an unfortunate end. In the end, Bruno had to pay the ultimate price for his brazenness.

On Monday, dozens of people began paying their respects to Bruno on a German Web site that has set up a condolences blog. Bruno's body is to be given an autopsy to determine his health, body mass and weight, and his genetic identity. His body will then be exhibited at a natural history museum in Munich's Nymphenburg Palace. The museum already shows a brown bear that was shot in Bavaria 170 years ago.