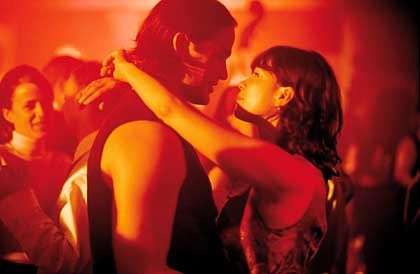 A scene from the new film "The Red Cockatoo."

When Goodbye Lenin! scooped the prize for best European film at the Berlin International Film Festival in 2003, "ostalgia" -- the wistfulness felt by many for the good old days of communist East Germany -- was at its most irritating high-point. Pollution-spewing Trabants were en vogue. Stores were springing up across the German capital selling East German products. Tight-fitting T-shirts with "GDR" emblazoned prominently across the chest sprung up across the city.

The film fit in perfectly. With its opening scenes set just before the 1989 fall of the Berlin Wall, "Goodbye Lenin!" provided a comic look at the difficulties one East German family had adjusting to life in the newly reunified capitalist state. And it made the former East German communists seem about as threatening as garden gnomes -- and even kind of hip in a retro sort of way.

But that rather cuddly view of the old East looks to be changing. Sure ostalgia is still around -- Berlin has just seen one last wave of protests against tearing down the former East German parliament building -- the so-called "Palast der Republik" -- in the center of the city. Film, though, is once again taking a look at the German Democratic Republic (GDR). This time around, the gloves are off and directors are probing old wounds by examining Germany's communist past in a much more nuanced fashion.

"Not easy for people to accept"

"The Red Cockatoo" -- set in 1961 Dresden immediately prior to the building of the Wall and the closing of the East-West border -- is generating the most attention. Though it's made by the same team which drew a veneer of make-believe across East Germany in "Goodbye Lenin!" the new movie, which opened in February, is much more critical. Based on a true story, the action takes place in a notorious night-club, The Red Cockatoo, where Western rock n roll was played. Frowned on by the secret police -- known as the Stasi -- as subversive, the club is eventually closed down and the beatniks who hang out there charged as enemies of the state.

The touching documentary Katharina Bullin -- And I Thought I Was the Greatest," tells the story of one of East Germanys top athletes victimized by the country's secret practice of steroid doping. A number of East German athletes fell victim to the program and the film depicts Bullin bravely coming to terms with the health problems resulting from the testosterone administered without her consent or knowledge. This is a really difficult topic to tackle, says the films director Markus Welsch, as sporting achievements are one of the few things which many East Germans are still proud of. For me, as a West German to then come along and say, actually this is one of the worst things that happened, is not easy for people to accept.

Another documentary, called Last To Know, deals with families torn apart by the Stasi as it imprisoned parents considered dangerous enemies of the state. The film demonstrates how the subject of who betrayed who within a family is still very much taboo. All three of the films were shown in this year's Berlin International Film Festival celebrated in February.

But why now? Why, a full decade and a half after 1990 reunification, are Germans finally seeing East Germany in a less favorable light? According to Dr. Stefan Bollinger, professor of politics at Berlins Free University, the trend is only to be expected -- part of the German processing of GDR history.

At first, after the fall of the Wall in 1989, there was a tendency for people to detach themselves from their own past by rejecting everything to do with the GDR, Bollinger says. This reached a high point between 1991 and 1993. Then in the mid 1990s, because of the economic crisis in eastern Germany, the capitalist hierarchy was seen to be more flawed and people started looking at what they had lost with the fall of East Germany. This was a particularly tough time for East Germans because they were the hardest hit by the loss of heavy industry and high unemployment. Now we are seeing a certain process of normalization, where the GDR is being looked at in a more nuanced way.

In other words, people are beginning to realize that the GDR was much more complex than the rather simplistic view many have had of it until now. It wasnt simply an evil empire with secret agents on every street corner, as it was depicted in the early 1990s. And it certainly wasn't a cuddly society with flair as "ostalgia" would have it. 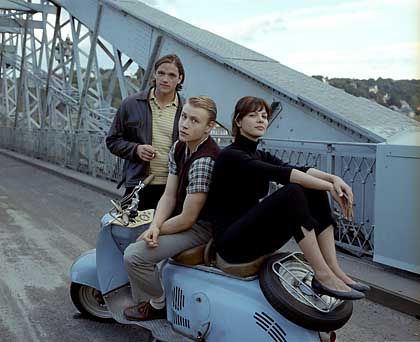 "The Red Cockatoo" is part of a new wave of German films taking a harder look at East Germany.

But perhaps the adoption of East Germany by the young and hip got the debate going. Goodbye Lenin! had the great merit of actually opening the door to discussing the topic in the first place, Dominik Graf, the director of The Red Cockatoo believes. Before that the whole topic of the GDR was covered only in television dramas about the Stasi. And then came 'Goodbye Lenin'! and everyone was quite ready to turn things around and look at how cute and sweet the GDR was as well. But that is also not the whole story. Compared to 15 years ago, people are much more ready now to look in more detail at what East Germany originally wanted to achieve, and why things went wrong.

For Wieland Speck, the director of the Panorama art house section who selected these films for the Berlin film festival, this process parallels Germany's coming to terms with its Nazi past. At first, just after the war, everyone just tried to pretend it never happened. Then there was some nostalgia, he says, and it wasnt until the late 1960s that the years under Hitler were really looked at critically. Of course we all say this debate came too late, but it happened and it is still continuing. The same thing seems to be happening now with our GDR past.

Clearly though the debate is far from over and it will take generations to really be able to have a clear and neutral view of the GDR. For Dr Bollinger the discussion is only just beginning. Historically speaking, he says, 15 years is nothing.