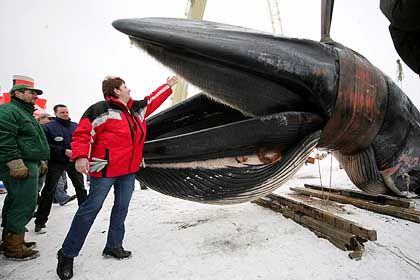 The staff of the Japanese embassy can now just step outside for sushi at lunchtime.

It's not often you see a whale on the streets of land-locked Berlin. But that is exactly what would have confronted anyone passing by the Japanese embassy on Thursday morning. The whale, which was found dead on the Baltic Sea coast of northern Germany on Saturday, was placed in front of the embassy by the environmentalist group Greenpeace to protest against Japan's whale hunting policy.

"This is a way for us to draw attention to the situation of whales," said Greenpeace spokesman Björn Jettka. "The Japanese say they need these endangered sea mammals for research, so we have brought them one." In Japan, limited whale hunting is permitted for scientific purposes -- but the meat often winds up on dinner tables at expensive sushi restaurants.

Curious Berliners welcomed the whale as it arrived in the capital for display in front of the embassy. Sub-zero temperatures in the city ensured that the whale carcass didn't begin to decompose, making it a largely pleasurable and educational experience for visitors.

Faced with a 17-meter-long (55.7 feet long) whale at their doorstep, Japanese diplomatic staff were remarkably unperturbed. "This is not exactly a pleasant situation for us, but we are just happy it is not summer when the smell would have made things much worse," Kazuya Otsuka, the Japanese embassy's first secretary, told SPIEGEL ONLINE on Thursday morning. "In Germany, citizens do have the freedom to protest. We have great respect for this right." He did however say that embassy staff were disappointed nothing could be done. Would this protest change Japan's policy towards whale hunting? "No," said Otsuka. "By demonstrating in this manner, Greenpeace is not giving us any new arguments."

Less relaxed was the reaction of Harald Behnke, the head of the German Oceanographic Museum in Stralsund. When Greenpeace collected the whale's body, it was ostensibly supposed to deliver it directly to the nearby museum. "If I had known that the whale would take such a roundabout route, I never would have agreed to its transport," Behnke told the tabloid Bild. Behnke said the prompt delivery of the whale to the museum is crucial: "Only then can the animals be secured, scientifically examined and the findings evaluated." The whale is due to be transported to the museum, which is located on the Baltic Coast, on Thursday.

The animal is a fin whale, second in size only to the blue whale. It is a protected species and there are between 50,000 and 100,000 fin whales in the world. Generally found out in the wide ocean, experts believe that this particular whale strayed from the Atlantic into the Baltic Sea looking for fish. It is thought to have lost orientation in the Baltic's relatively shallow waters and starved to death.