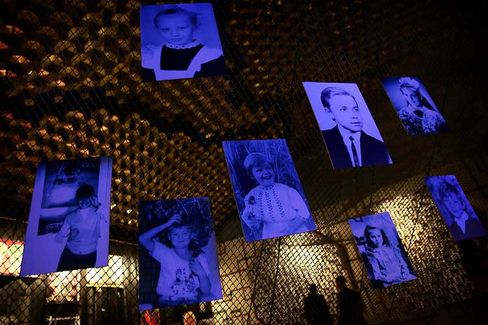 How many people died as a result of Chernobyl is a controversial question. Here, pictures of known victims hangin the Chernobyl Museum in Kiev, Ukraine.

Just how many people may ultimately die as a result of the Chernobyl nuclear disaster two decades ago has long been one of the largest questions raised by the meltdown. Almost every year, a new study comes out on or near the catastrophe's late April anniversary with yet another estimate.

This year, it was the turn of Greenpeace, which on Tuesday released a controversial new report (pdf) that argues that the number of Chernobyl dead may be much higher than the 4,000 estimated in a 2005 report (pdf) issued by the United Nations group Chernobyl Forum. As many as 90,000 victims may eventually succumb to radiation-related illnesses, the Greenpeace report says.

The report relied on extrapolations from data on cancer incidence taken from Russia, Belarus and Ukraine -- all countries hit hard by the vast radiation cloud which spewed out of Reactor Four after it exploded in the early morning hours of April 26, 1986. Statistics from Belarus, for example, indicate that there are 270,000 cases of cancer attributable to the Chernobyl disaster in the hardest hit areas with 93,000 of those cases likely to be fatal, according to the report. Greenpeace also cited a report by Veniamin Khudolei of the Center for Independent Environmental Assessment of the Russian Academy of Sciences which found that the mortality rate in western Russia has sharply increased in the last 15 years, suggesting a possible connection with Chernobyl radiation.

Greenpeace used the report's release as an opportunity to blast the findings of the UN Chernobyl Forum. The International Atomic Energy Agency (IAEA), which is part of the Forum, came in for particular abuse during the presentation of the study in London with Greenpeace accusing it of playing down the dangers of nuclear energy.

"The nuclear industry is the most dangerous in the world, and they (the IAEA) are definitely trying to minimize the results of the Chernobyl catastrophe," Ivan Blokov of Greenpeace's Russia office told the Associated Press. "We have a report showing the incredible damage caused to humans ... . Nearly every system of the organism is damaged."

The Chernobyl Forum firmly rejects the Greenpeace accusation. Its report, which said that fewer than 50 deaths can be conclusively linked to Chernobyl, argues that death by cancer among the some 5 million people who received low radiation doses would be almost statistically invisible. The report was put together by experts from a number of different agencies from within the UN including the IAEA and the World Health Organization (WHO).

"Peer reviewed science only really started developing in Russia and the Soviet states after the Soviet Union collapsed," Mikhail Balonov, Scientific Secretary of the Chernobyl Forum, told SPIEGEL ONLINE in criticizing the Greenpeace results which relied entirely on locally produced studies. "If you want to get some serious conclusions from the data, it has to be in peer reviewed papers. Unfortunately none of the studies cited in the new report have been peer reviewed ... . It relies on bad science."

Gregory Härtl, a Geneva-based spokesman for WHO -- which was responsible for the health data used in the Forum report -- likewise warns against accepting the Greenpeace report at face value. "I would approach this study with care. One always has to remind people why people make such estimates," Härtl told SPIEGEL ONLINE, in reference to Greenpeace's staunchly anti-nuclear stance.

Indeed, many scientists concede that determining where an individual health problem comes from is difficult, particularly in a part of the world characterized by poor economic conditions and unhealthy lifestyles including high rates of drinking and smoking. Härtl also says that the further one travels from the disaster zone, the more difficult it becomes to conclusively link illnesses to Chernobyl radiation.

Still, says Volodymyr Bebeshko, a scientist from the Ukrainian Center for Radiation Medicine who worked on the Chernobyl Forum report but refused to endorse the results, radiation also plays a significant role. "Quite honestly, it doesn't reflect reality," he told the AP in reference to the Chernobyl Forum report. "They are very clearly trying to minimize the consequences."

In other words, coming up with a reliable estimate of the human costs of the Chernobyl meltdown is politically loaded and extremely difficult. Everybody has a guess, but they vary widely based on how a given study was designed and the methodology used:

Apart from the difficult calculus of determining a Chernobyl body count, the International Atomic Energy Agency (IAEA) has also been challenged on its estimates that only 3 to 4 percent of the nuclear fuel used in the stricken reactor actually escaped into the atmosphere during the disaster. Viktor Poyarkov, a Ukrainian radiation expert, told DER SPIEGEL that he believes up to 50 percent of the fuel escaped. Scientists at the Kurchatov Institute in Moscow believe that almost all of it was released.

Both controversies -- the number of victims and the amount of radiation released -- are important in determining whether the investment of billions of dollars in nuclear power projects is worth the risk.