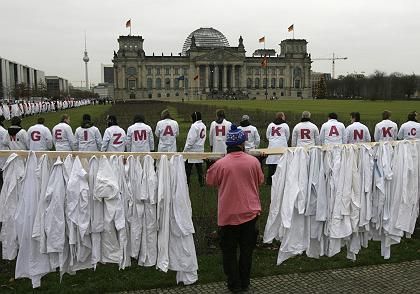 Loud public protests accompanied the recent revelation that doctors had hired protesters for a December demonstration in front of Berlin's Reichstag.

For Germans old enough to remember the glory days of 1968, when communes were all the rage and students took to the streets to protest against all kinds of injustices, the country in 2007 is almost a completely foreign place. The welfare state is being rolled back, German troops are now engaged in military operations abroad, and the current generation of young people seems more interested in attending business school than bringing down the military-industrial complex.

Just how much the world has changed since those days can be seen at the Web site Erento.com. What the '68 generation once did out of passion, people now do for money. Berlin-based Erento, a company that pairs renters with potential customers, offers an unusual lineup of products and services for loan. In addition to such rentals as snow machines, horse-drawn carriages for weddings, chicken-plucking machines and private jets, the site also now offers a unique service: protestors for hire.

Judging by their profiles, most of the 300-plus people currently listed in the "rent a demonstrator" category are young and attractive. Potential agitators looking for support for their public protests can choose, for example, Steffen, age 22, 190 cm tall (6 feet 2 inches), "athletic" and with a shoe size of 45. He's available for gigs all over Germany, but says he prefers the state of North Rhine-Westphalia. Or Manuela, who has green eyes and "very long" hair and is available within a 100-kilometer range of Berlin. Included in the extensive personal information -- which at times seems more suited to a dating site -- are skin color and "appearance type," which can be for example "European," "African," "South American" or "Asian."

All in a day's work

An Eremto spokesperson told SPIEGEL ONLINE that most of the demonstrators were "students, pensioners, or housewives," adding that the pseudo protestors are free to negotiate their own price with customers. Most seem to have settled for an all-inclusive price of €145 ($188) for six hours' work, although some can also be hired for a mere €10 an hour. Erento takes 4.9 percent of the money as a management fee, the rest goes to the demonstrator.

The business model certainly seems to be working -- publishing congomerate Holtzbrinck, which recently purchased the German equivalent of Facebook, StudiVZ, bought 13 percent of Erento earlier this week for an undisclosed sum in the region of €1 million to €3 million. Erento was founded in 2003 and currently features items and services to rent in 2,200 categories.

But isn't it problematic if an organization decides to rent protestors instead of using their own, politically committed activists? "Each organization has to decide that for itself," the Erento spokesperson said, explaining that the new category was added to the Web site as a result of a series of enquiries by organizations seeking protestors.

However the free market has not entirely overcome political principle. The demonstrators say they are not available for just any kind of protest. Those involving neo-Nazis or promoting discrimination, for example, are out of the question. "The demonstrators have to decide for themselves what kind of protests they are willing to participate in," the spokesperson said. "One person might be in favor of health care reforms, while another might be against them."

Of course, those prickly health care reforms are currently a hot topic in German politics. A national association of doctors recently found itself in hot water after it was revealed that the organization had hired up to 200 "demonstrators" to take part in a protest against proposed health care reforms outside the German parliament in Berlin. Roland Stahl, spokesman for the Association of Statutory Insurance Physicians (KVB) defended the decision to hire students and the unemployed as demonstrators. "That wasn't a demonstration, rather a pure public relations exercise," he told SPIEGEL ONLINE, adding that hiring people for such events is normal.

Whatever form an organization's public relations exercise takes, Erento's multi-talented protestors for hire are apparently able to hold placards and shout slogans, as well as simply make up the needed numbers to create a mass. Other services presumably need to be negotiated directly with the contractor, but it seems safe to assume the rented rebels would be unwilling to throw Molotov cocktails or fight with police officers -- at least not for €10 an hour. This is a new era of demonstrating, after all.