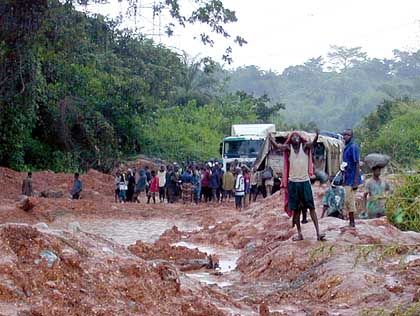 Even for a small town, a mere 19 residents is meager. But, when representatives of the German aid group, German Agro Aid (Welthungerhilfe) arrived in the town of Nyabiondo in the Democratic Republic of Congo, that's exactly what they found. All the other residents had been scared off -- fleeing into the forests years ago to avoid the roving bands of rebels fighting in the nation's ongoing civil war. Over time, the jungle grew over what were once national roads, leaving them virtually unrecognizable. But then the Germans came and hacked an aisle through the thick forest to make the forgotten roadway visible again. They also built two schools and a health care center.

Within three months the tiny town was booming. An additional 11,000 families had come and once again the place resembled a city, rather than a ghost town. "And that was without an organized program to get people back," said Georg Doerken, of German Agro Aid. The group gave all returning residents seeds to plant and tools so that they could plow and sow their land themselves. The success of the program convinced German Agro Aid's Congo program manager that this is the sort of model that works for Africa.

Flash to Scotland, where British Prime Minister Tony Blair has put development aid for Africa at the top of the list for G8 summit talks that began Wednesday. At the summit, Blair is expected to advocate a sort of "Marshall Plan" for Africa. In it, the western industrial powers will be asked to double their contributions to a yearly sum of $50 billion by 2010 and to $75 billion by 2015. The plan is not only being questioned because of its high-scale finances. It is also pushing leaders to ask the trickier question of just what development aid actually buys.

Several African intellectuals are now convinced that in the end, throwing more money at Africa hurts more than helps the continent. "If the industrial nations really want to help the Africans, they should finally terminate this awful aid," Kenyan economic expert James Shiwati told SPIEGEL in an interview. "The countries that have collected the most development aid are also the ones that are in the worst shape." 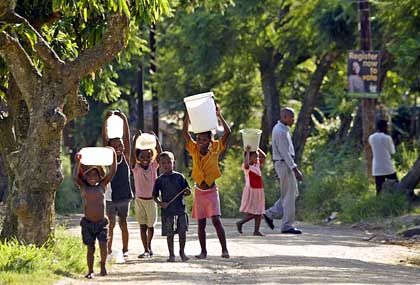 Children carrying water in Durban, South Africa: With better infrastructure, business would be easier in Africa.

Doerken, of German Agro Aid, too, is angry that the rulers of Africa have often squandered aid money given to them. For him, the most important thing for Africa is that "fair trade opportunities are established." He insists that "debt relief is not the only solution." It's also necessary, he says, to alleviate barriers to trade. A combination of debt relief and easier market entry, he says, would make it possible for poor African states to jumpstart their social programs.

Hans W. Meier-Ewert concurs. The head of the Hamburg-based Africa Society (Afrika Verein), an organization for German companies with business interests in Africa, says the first thing which needs to happen is the elimination of subsidies for agricultural products in Europe and the United States. Only then could conditions be created in which African countries would be in an independent position to "find their way out of poverty through trade."

Meier-Ewert outright dismisses the "prejudicial reputation Africa has of being a tough market." Ultimately, the only thing which is difficult is the entry -- and once that has been tackled, "high profit prospects" beckon. And because the African market isn't as "flooded as the Asian market," the opportunities here are considerable. 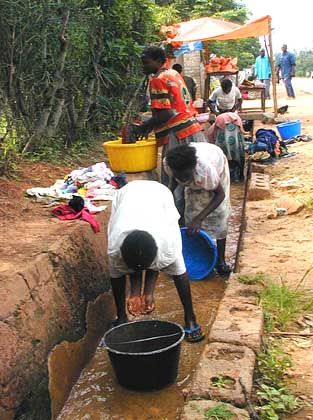 Some argue that debt relief is not enough. Africa needs programs to help people help themselves. And and an opening of trade markets.

For years, donor nations have demanded more responsible governments in Africa that take more action against corruption and despotism. But in this regard, as well, German experts are skeptical -- after all, many governments don't even have full control of their countries. Just look at Congo -- the country's central government controls little more than its capital city, "Kinshasa and a radius of three kilometers around it," says Agro Aid's Doerken. At the German Development Institute in Bonn, Stephan Klingebiel shares this view. The head of the organization's sub-Saharan policy department points out that in one-third of all African countries, governments don't have a monopoly on power.

"That's why we focus on working together with local partners," says Dominique Mann, of the German Christian aid organization Brot fuer die Welt (Bread for the World).

Some argue that debt relief is not enough. Africa needs programs to help people help themselves. And and an opening of trade markets.

In interviews with SPIEGEL ONLINE, other spokespersons for large German development organizations also stated that, for some years now, they have increased their focus on such partnerships with non-government organizations that have local bases. They say that by focusing on these local partners, they are able to circumvent the rampant corruption which plagues many governments in Africa. Strict guidelines, they say, ensures the success of most projects.

Representatives of German aid organizations also argue that food relief deliveries are now only acceptable in cases of emergency aid. And even then, they believe grain should be purchased from local markets at normal trading prices. The agency generally responsible for this type of emergency relief is the United Nations' World Food Program (WFP). But WFP's German spokesperson, Bettina Luescher, repudiates the blanket criticism. "It is impossible not to have this type of aid," she says, pointing out that the lives of 26 million people in Africa are threatened by acute hunger. Without these emergency food deliveries, she warns, they would die. 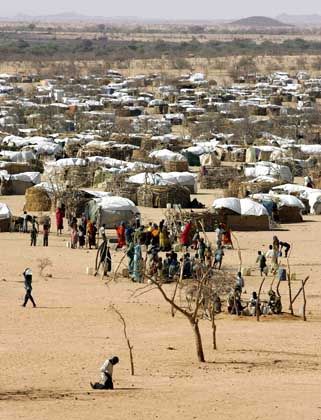 A camp in Chad for refugees from Sudan's Darfur region.

Besides, the WFP long ago changed its aid practices that drew the heaviest criticism. It did away with old structures that allowed corn from highly subsidized American and European farmers to be sent to Africa. The aid devastated the local agricultural economy and often landed on the black market or in the hands of corrupt politicians. WFP reacted to this criticism and it now buys as many of the supplies it can from local markets. Luescher also says allegations made by experts like Kenyan economist James Shikwati, who calls WFP a "massive agency of apparatchiks" only interested in saving their own jobs, are rubbish. Luescher says that only 7 percent of WFP's overall budget goes into the program's administration. The agency has also enjoyed its share of successes. China, she notes, has gone from being a recipient land to donor land."

Shikwati has also criticized donations of used clothing, most of which end up getting sold at local markets at high prices. The clothes are not only unnecessary, he says, but also harm Africa's textiles market. 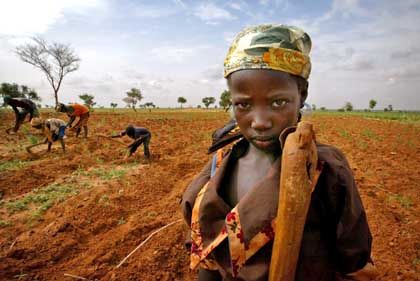 For the spokesman of the Catholic relief organization Misereor, Michael Kleine, that's old news. And the German Development Institute's Klingebiel says: "We've known for 20 years that (sending clothes) is nonsense." And even Luebbo Roewer of the German Red Cross, one of the main organizations that continues to collect clothing, admits that it is no longer a lucrative relief strategy. He says it is only useful in "limited areas." Nor can he rule out that clothing gathered in the Red Cross's many containers in Germany will not end up in the hands of middlemen. "For us, the transportation costs of getting (clothing) to Africa is just too expensive."