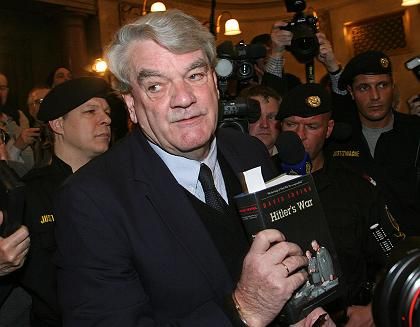 British historian David Irving: "I made a mistake when I said there were no gas chambers at Auschwitz."

Notorious British right-wing historian David Irving finally got his day in court in Vienna on Monday, where he is facing charges that could lead to up to 10 years of imprisonment in Austria on allegations that he denied the extent of the Holocaust.

Irving plead guilty to the charges and told reporters that he now believes that the Nazis did, in fact, systematically kill Jews during World War II. "I made a mistake when I said there were no gas chambers at Auschwitz," he told the court. Defending his books, he said: "In no way did I deny the killings of millions of people by the Nazis." The court is trying Irving on charges stemming from comments he made in 1989. At the time, he claimed the Nazis did not kill 6 million Jews, a statement prosecutors described as a "dangerous violation of freedom of speech."

Police arrested Irving in November after he returned to the country to give a speech to a right-wing student fraternity. He has since been held at a prison in Vienna.

On Monday, the 67-year-old came to the courtroom carrying a copy of "Hitler's War," one of his most controversial books. Irving's attorney said his client would plead guilty to the charges, but he would ask for leniency since he has since changed his views about the Holocaust.

"I'm not a Holocaust denier," Irving told reporters. "Obviously, I've changed my views." History, he said, "is a constantly growing tree -- the more you know, the more documents become available, the more you learn, and I have learned a lot since 1989." He has since acknowledged the existence of the gas chambers. "Millions of Jews died, there is no question. Ii don't know the figure. I'm not an expert on the Holocaust."

The self-confident, self-taught writer has enjoyed causing uproar, especially among mainstream historians, ever since the 1960s. His sensationally written and extensively documented biographies of leading Nazi figures were bestsellers up until the 1980s.

Despite admiration for Irving's detective skills, his work increasingly came under fire after 1977, when his biography of Hitler was published. A respected military historian until then, Irving quickly became Hitler's willing discoverer, using his finds to prove the guilt of Himmler, Heydrich and others while claiming that his revered Führer was entirely blameless.

Irving, who was still giving lectures in the fading East Germany in 1990 under the title "A Briton fights for the honor of the Germans," chose contemporary history and not politics as his pulpit. "Standing in front of 10,000 people who waited an entire day, and who are now sitting on hard benches drinking their beer, waiting for you to speak -- that's the ultimate reward," he said in 1992 during a speaking tour.

David Irving denied the Holocaust, denied Hitler's guilt and mocked the survivors of the Nazi concentration camps. Thanks to his derisive remarks on what he called the Allies' "victors' view of history" and his snide treatment of established historians, Irving soon became a figurehead for right-wing extremists and a welcome agitator at events hosted by the far-right German People's Union (DVU), where the eternally unteachable could listen to him lecture on "what it was really like" in the "Third Reich."

A guilty verdict is expected in his case later on Monday.