Yemos Vurgun was the frail matriarch of a Turkish immigrant family when she died in 1994, aged 90, and although she'd spent her last 14 years in Berlin, her son Ali Riza put her travel papers in order: She had one last trip to make. 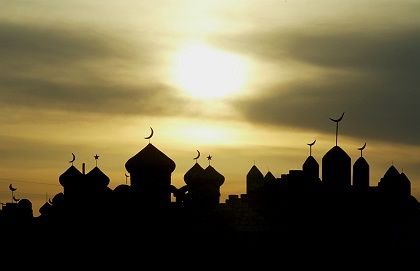 Many Muslim immigrants in Germany prefer to have traditional Islamic burials in their countries of origin.

"We had to have her passport stamped," said Ali, who traveled with the casket to Turkey. The stamp from German officials proved she was dead. Ali needed it so Turkish officials would admit her body back into her homeland.

A full five days after her death -- three days of paperwork in Berlin, then two plane trips and a ride in a van -- Vurgun's casket arrived in the mountain village of Akyurt, in eastern Turkey, where the old woman was laid to rest beside her husband.

"We never considered burying her in Berlin," said Ali. "Our neighbors in Akyurt wouldn't have forgiven us."

Vurgun's children had left home in the '60s as part of the first wave of guest workers from Turkey, and she'd joined them only as a widow, in 1980. She was less integrated than most immigrants to Germany, but her story is still the rule for most Muslims here. Islamic undertakers estimate that 70 to 80 percent of Muslim immigrants arrange to have their bodies sent home -- mainly to Turkey, but also to other countries like Lebanon or Egypt -- rather than face a nontraditional burial in cold German ground.

The reasons aren't always religious -- sometimes they're financial, sometimes just nostalgic -- and the German system gets in the way as much as Islamic law. But integration, it seems, can be a problem even in death.

A Muslim looking to spend eternity here faces a few important sticking points. The first is tradition. As a rule, Muslims prefer shroud burials, but laws in most German states insist on a coffin. The reason has less to do with Christian tradition than local biology. Corpses in cold, damp European earth tend to build up a substance undertakers call adipocere or "grave wax" -- a petrification of fats and other tissues that mummify the flesh -- unless they're housed in a ventilated box.

"A body can't decay in German soil," says Hans-Harald Stokkelaar, an undertaker in Münster who has campaigned against shroud burials. He points out that Muslim immigrants to Germany tend to come from countries which have sandy soil, where a body wrapped in a shroud can easily decay. "But in Germany, after 40 years, you can pull a body like that almost whole out of the ground."

Which brings up another problem -- graves in Germany are rented. They can be sold, but the most common arrangement is a 30- or 60-year lease, which lets a cemetery turn over its tenants. Ali gave this as a reason for sending his mother home: "In Turkey, once youre buried, the body stays there forever."

One possible solution is to allow Islamic graveyards with their own rules, where Muslims can be buried in shrouds and their bodies can be left in peace for perpetuity. The coffin laws, of course, stand in the way, but are not insurmountable; after a public controversy in 2004, the state of North-Rhine Westphalia relaxed its law and allowed individual districts and towns to make up their own minds about shroud burial. But there are still few Islamic cemeteries in the state.

The laws vary from state to state within Germany, points out Ilka Petersen from the German funeral services corporation Ahorn Grieneisen, but in practice mosques and other Islamic societies have been refused land by German towns because they're seen as unofficial or "guest" groups. "Islamic cemeteries will be possible only when existing Muslim societies receive the status of 'public corporations,'" like officially-recognized churches, she says. "For now, they don't have this status."

As a result, Islamic caretakers act as intermediaries to make sure their customers receive Muslim burials in the few German cemeteries that allow them. The Gatower Cemetery near Spandau, west of Berlin, has an Islamic section where graves can be angled toward Mecca, for example. It also has facilities for washing corpses in a way accepted by Islam.

But local law still won't allow shroud burial, so Ahorn Grieneisens department for Muslim burials, Ikinci Bahar, falls back on a fatwa released in 1985 by scholars in Mecca. The legal ruling argues that Islam "has nothing against" burial in an unadorned wooden coffin. Ilka Petersen says shroud burial is a long Islamic tradition, but not Koranic law: "In the Koran it says, let yourself be buried wherever you die -- everywhere is Gods acre."

Greater Berlin has two Islamic graveyards. The Gatower Cemetery's Islamic section is one; but the other, near the Sehitlik mosque in the district of Neukölln, is full. Kaiser Wilhelm I gave the property to a Berlin Turkish society as a gift in 1866, and the last Muslim was buried there in 1989. Since the land was a permanent gift, though, the graves will stay undisturbed.

One stumbling block for Muslims who don't mind burial in Germany is the complex of rumors and laws, according to Mohammed Herzog, founder of the Islamic Society of German-Speaking Muslims in Berlin. Immigrants hear about Islamic cemeteries, but they don't always know whats possible or legal. So Herzog has set up a collective fund or insurance scheme for Muslims in Germany to fix the rules for their own funerals.

"I constantly tell people that they need to be responsible," he says. "It happens a lot with Muslims who come from other countries that theyre not insured, and if the welfare office takes care of the funeral, no matter what's in the person's will, a traditional Islamic service wont be covered." Another problem, he says, is that it used to be common for immigrants who died with no living relatives here to be cremated: "This is forbidden in Islam."

Which points to the most important hitch in Germany for many immigrants -- price. An average German funeral costs about €5,000, and for that money you don't even get the plot. It costs about €2,500 to ship a corpse to Turkey, where it can rest forever.

The full price of burying his mother in 1994, Ali Riza Vurgun said, was higher than €2,500, but that was because he and his family had made arrangements themselves. Germany has a number of Turkish or Muslim collectives that help defray the cost. Herzogs Islamic Society contracts with Ikinci Bahar, for example, to offer traditional funerals at affordable rates.

For a minimum of €25 per year, any Muslim in Germany can buy into the society's scheme to ensure an Islamic burial locally or in Turkey -- complete with a plane ticket for one living relative. "Its not that expensive to go to Turkey," Herzog says, adding that they also offer other, more expensive packages for countries that are farther away.

Herzog's funeral collective is only a year old but it already has 400 members. Most are younger and don't want to be sent abroad. "The Turk or Arab who was born in Germany as a rule wants to be buried here," he says.

Talip Caliskan, who's in charge of another Berlin collective, agrees. The main reason people come to his organization, Milli Görüs, to arrange post-mortem trips to Turkey is nostalgia rather than religion. "It's not the law, and it also doesn't have so much to do with Islamic ritual," he says. "Old Muslims just want to be buried where they were born."

Ali Riza Vurgun, Yemos' loyal son, is now a retired, heavyset 63-year-old with a fringe of white hair around his head. After a career as a guest worker in Germany -- as a truck driver, a brewery laborer, and a metalworker, among other jobs -- he divides his time between Berlin and a summer house in Anatolia, which is far from Akyurt, where he buried his mother.

He feels the distance even within Turkey. "I spend most of my time in Anatolia," he says, "but I still want to be buried in Akyurt." Why? "The water in the mountains is cold and clean."

He pats his belly and laughs. "But if I die in Germany, it will be expensive to ship me home."

Michael Scott Moore is a Fulbright journalist in Berlin