The famous Fawlty Towers skit, "But don't mention the war," lent its name to a recent essay contest sponsered by the German Academic Exchange Service.

When Germans go on their package holidays, it is said, they get up extra early and run down to the pool with a towel in order to reserve the best sun lounges. That, at least, is what the British say. It seems that they come across such over-eager, sun lounge-obsessed Germans all the time on their trips to island paradise.

That, however, is just one of the many stereotypes the British fondly cultivate when it comes to Germany -- and the gutter press joyfully trots them out at every available opportunity: from the macho bravado of "blitz the Fritz" chants at every football match to prophecies of doom that Germany is going to take over Europe whenever the EU is on the political agenda. The latest significant rift in the German-British relationship was caused by headlines about the German pope, Benedict XVI -- pilloried as "God's rottweiler" by the Daily Mirror. The method is tried and tested: The British media let rip, and then laugh at the "krauts" for being in a huff. For best results, just allude to the Second World War.

This is why the German Academic Exchange Service (DAAD) has called its essay competition, in which students at British universities write about Germany, "But don't mention the war." It is a tongue-in-cheek reference to what is possibly the most famous episode in the legendary British comedy series "Fawlty Towers," in which the bad-tempered British hotel-owner Basil Fawlty, played by John Cleese, drives his German guests crazy by constantly talking about the war.

Every British child knows the lines and even a fair number of Cleese fans in Germany would be able recite them: "Would you please stop talking about the war all the time," asks the German guest. Fawlty: "Me? But you started it." "We didn't start anything," the guest answers back. "Yes, you did," replies Fawlty exasperatedly. "You invaded Poland." Cleese, master of the goose-step, is now the essay competition's patron. He says that he is happy to help smash the ludicrous stereotypes peddled by the gutter press, as well as the clichés held by idiots like Basil Fawlty who hang on to a view of the world which is 50 years out of date.

"Too much Hitler, not enough modern Germany"

Eighty undergraduates submitted essays to the DAAD competition, two thirds of them in English, one third in German. Last week, a reception was held at the German embassy in London for the winners. Brian Hanrahan, highly-respected diplomatic editor for the BBC and member of the jury (which is made up of professors, journalists and foreign officials), said he was surprised by how good, both in content and style, the essays have been. The German ambassador in London, Thomas Matussek, likewise stressed how enjoyable the pieces were to read -- mainly because the students gave a very different view of Germany to that which is usually seen in Britain. 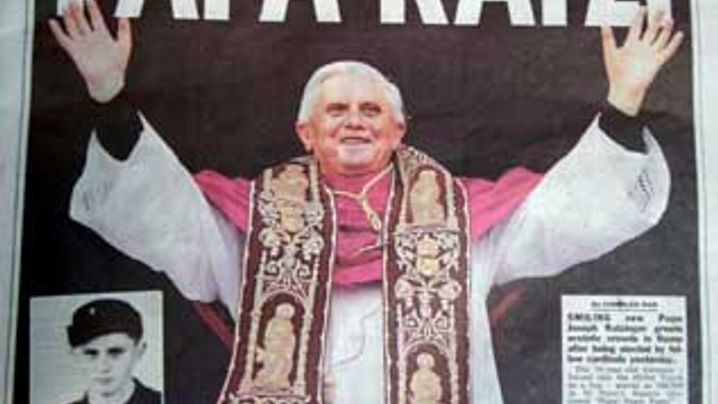 British Stereotypes of the Germans: Goosesteps and Spiked Helmets

Indeed, it was only recently that the ambassador complained in a British newspaper that "the constant repetition of clichés and stereotypes in the English media" sometimes completely swamps the reality. Matussek's criticism was not referring to "too much Hitler" but rather "not enough modern-day Germany." He believes that the lessons which Germany has learned from the Holocaust and World War II have been completely passed over in Britain -- particularly in school history lessons.

Matussek is not alone in his exasperation. German Foreign Minister Joschka Fischer, 57, is also upset by the avalanche of stereotypes over the last year. In a BBC interview, Fischer said "my children are 20 and 25. When they see Germany portrayed in some of the British media, they feel they are receiving an image (of Germany) they have never seen in their whole lifetimes." He added that "if you want to learn how the traditional Prussian goose-step works, you have to watch British TV, because in Germany, in the younger generation -- even in my generation -- nobody knows how to perform it."

The essay competition was initiated by Nina Lemmens, head of the DAAD office in London, partially to battle such stereotypes and partially because the London office hasn't been receiving enough applications for the year-long scholarship they award to British students for study in Germany. Part of the lack of interest is likely because students at British universities are often unwilling to spend a year abroad due to the high tuition fees. These have gone up again under Blair's government, meaning that a year out just increases the mountain of debt which has to be paid back at the end of the course. In addition many young people are just not that interested in other countries. The DAAD has decided to consciously promote itself using stereotypes, and also by using the football World Cup next year.

Banishing stereotypes in the beauty salon

The biggest culture shock that young Britons have during a trip to Germany, it seems, comes from a visit to Berlin. The German capital is laden with history but is lively in an almost chaotic way. Almost all of the prize winners say that trips to Berlin are very popular amongst the Brit youth.

Oliver Hopwood, 20, for example, was forced to change his image of Germany after a memorable visit to a hairdresser's in Prenzlauer Berg. The student of French and German at the University of Warwick was awarded the top prize in the English category. Normally he hates getting his hair cut, Hopwood writes, and the capitalist coolness of Toni & Guy has always intimidated him. But a trip to the salon "Kopfgeldjäger" ("Bounty Hunter") freed him of his inhibitions. A haircut costs just 12, and there was no shame for Hopwood in being a decidedly un-hip tourist. At the same time the relaxed atmosphere there is very well organized: New arrivals take a number and wait until it appears on a neon-board.

Hopwood had of course expected German efficiency. What really grabbed him though was the sociological microcosm. Like the woman he describes with the leopard-skin leggings, a heavy Berlin accent and a manicured poodle. Or the obviously gay hairdresser, dressed all in gothic-black, with the T-shirt which said "No. I am not gay." When he leaves he even gets given a tiny bottle of "Kopfgeldjäger" shampoo. His conclusion: There is nowhere more exciting and more fascinating than Berlin.

Lucy Smith, 22, a student of German who received the award for the best German-language essay, has been living in the German capital for a number of months already and works for a textbook publishing company. The omnipresent graffiti on Berlin buildings were a surprise for her, she wrote. She had believed the stereotype, popular in England and, indeed, the world over, that the Germans were obsessed with law and order. Berlin, she says, appears to be completely different: "big, loud, sometimes dirty and ugly."

Smith describes how she spent almost an entire morning in Berlin dealing with bureaucratic formalities -- filling out the required "place of residency" registration and getting her tax documentation. "I came out into the sun again with a proud, snide smile on my face knowing I was a citizen of the much-more-easy going Great Britain." But then, the sunbathers in the park next door were also easy going -- for Britons maybe even a bit too permissive. A woman stripped down to her underwear while Smith, as she writes, was busy making sure her legs remained covered by her skirt.

Hitler makes appearances all the time in Britain. Here, as Tony Blair in an anti-Blair demo.

"The people in Berlin have a certain self-assurance," Smith observed. "They don't care what others think about them." She also discovered a different side of the Germans when she went to the Jewish Museum during the "Long Night of the Museums," an event that comes around twice a year when Berlin museums are open until long past midnight. She was impressed that "people are prepared to visit museums at one o'clock in the morning" -- apparently out of need to confront the past of their own country. "It seemed somehow unfair to be reminded of the crimes of previous generations on such a nice summer evening."

Smith took part in a Europe Quiz organized by the German Foreign Ministry and was surrounded by the pro-Europe, smiley volunteers who organized the event. "There wasn't even the hint of cynicism -- which would have been impossible in England." But on the other hand, she had a hard time understanding the pacifism of many young Germans. The pacifism, she wrote, ironically expresses itself -- "at least this is my experience as a foreigner -- through aggression."