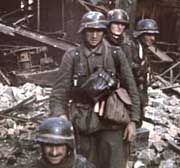 The Battle of Stalingrad: German infrantry soldiers march through the rubble.

During a meeting of his cabinet in early 1933, Adolf Hitler told his government that the future of Germany dependend on rebuilding the Wehrmacht, the country's once-powerful military. As part of his efforts to re-arm the military, he also ordered photographers to begin preparing for the real thing.

In 1938, a year before the invasion of Poland, the Wehrmacht began recruiting photographers for its propaganda campaigns. Most of the photographers ended up being volunteers who had approached the Nazis themselves in order to avoid the fate that might await normal soldiers on the front. As a propaganda tool, "the camera has become a weapon in the hands of soldiers," one wrote.

As propaganda photographers, there were many taboos that they were not allowed to break. Photos of dead or wounded Germans, for example, was a complete no-no -- after all, it would be unpalatable for the relatives back home in Germany. Photos of German soldiers or SS officers liquidating Jews or partisans also had no chance whatsoever of passing through the Nazi censors. But many took taboo photos, anyway, and kept them after the war.

Because they were intended as propaganda photos, the snapshots taken by the German photographers were often technically superior to the raw and powerful photos taken by the independent photographers embedded with the Allied troops. Robert Capa, who later established the legendary photo agency Magnum, Margaret Bourke-White, and Eugene Smith, who worked for Life magazine delivered few pictures of radiant heroes -- instead they captured people who were suffering from the war. They didn't try to aggrandize the war and Capa, of course, is famous for the quote: "I hope to remain unemployed as a war photographer till the end of my life."

Many soldiers also kept cameras in their field packs and managed to snap explosive amateur photos. Though the Nazi regime conducted almost absolute surveillance, it encouraged its soldiers to take photos as a way of strengthening the connection between the soldiers' homes and the front to improve morale. The Nazis couldn't control all the photography, anyway.

Most of the amateur photographers chose innocuous subjects for their snapshots -- other soldiers in their unit, landscapes, memorials and even people in the areas they occupied. The photos taken by these armed tourists often made it look like their work had all the severity of a school field trip.

Nevertheless, many of snap shooters felt a sort of magical draw to the horrors of the war of extermination in the Soviet Union. Many captured the mass shootings of Jews or the hanging of members of the resistance on film -- pictures that were strictly forbidden by Heinrich Himmler, the head of the SS.

Many such horror photos were taken out of the pockets of dead or captured German fighters by Red Army soldiers. The photos then became evidence in the trials against German war criminals in the Soviet Union and later in the legal processing of the Nazi criminals in Germany.

The same went for the photographic evidence of the Holocaust, and especially for the photos take by Allied troops after the liberation of the concentration camps. The argument that quickly developed over whether or not these photos -- some of the 20th century's most shocking and difficult to bear -- should be shown, has continued until today. Do the photos of the emaciated prisoners lead to a kind of emotional blunting? Do the pictures of the mountains of corpses dishonor the victims anew? Or do they serve the purpose of education?

In his essay on photography in the Second World War, the publisher of the book, SPIEGEL editor Michael Sontheimer, takes the view of Walter Benjamin, a Berlin Jew who took his life in 1940 while fleeing the Nazis. "Doesn't the photographer," asked Benjamin long before the war, "have the obligation to expose the guilty with his photos?"