Constantly improving understanding of many diseases has also ensured that drugs can be more attuned to individual needs. This reduces the size of the target group -- but also of potential profits for a given drug. With costs of development, depending on the estimate, that can amount to up to $2 billion, pharmaceutical companies tend to focus on the remaining, profitable fields of treatment. In this way, the gap between essential drugs and profitable fields of business is growing.

The Innovative Medicines Initiative (IMI) is intended to close that gap. The idea for the design of the joint venture arose equally in the European Commission and the leading pharmaceutical companies, the parties involved told the journalists working on this report. The task of developing the joint venture between the Commission and the pharmaceutical industry then got assigned to the European Federation of Pharmaceutical Industries and Associations (EFPIA).

The collaboration between lawmakers and industry was based on official EU regulations and documents with specific requirements about how it was to be implemented. It was stipulated, for example, that researchers and small- and mid-sized companies would only be given a voice in the evaluation of the submitted applications.

But the "disparity" between investment and the benefits for industry, research and small- and mid-sized companies was especially large in the early days of IMI, says Christian Ehler, a member of the European Parliament with the conservative Christian Democrats. The Commission's intention had been to give industry an inch, but instead it took a mile.

"The pharmaceutical manufacturers emptied their research institutions," says Ehler. They reasoned that others would take care of things for them from then on, the lawmaker recalls.

This is confirmed by an excerpt on the EFPIA website, which read, at least until October 2011: "In some cases, this (IMI projects) offers tremendous cost savings, as IMI projects replicate work that individual companies would have had to do anyway." The passage disappeared from the website some time later.

Of course, there are also positive things to report about IMI, says Ehler. For instance, he points out, many universities benefited from the introduction of IMI. They learned how to apply for European research projects as well as how to organize and derive benefit from them. IMI also improved cooperation with the European Medicines Agency (EMA).

IMI itself points to more than 600 scientific articles published in a number of recognized journals. Spokeswoman Catherine Brett also reports on advances in diabetes research, or on the discovery that a certain change in the brain in cases of autism can be reversible. A patent application has already been filed for a "revolutionary ultrasound device" that makes it possible to identify patients at risk for a heart attack or stroke, says Brett. She also notes that there is now a European network for the testing of new antibiotics, and that there are courses in which new experts are trained in drug development 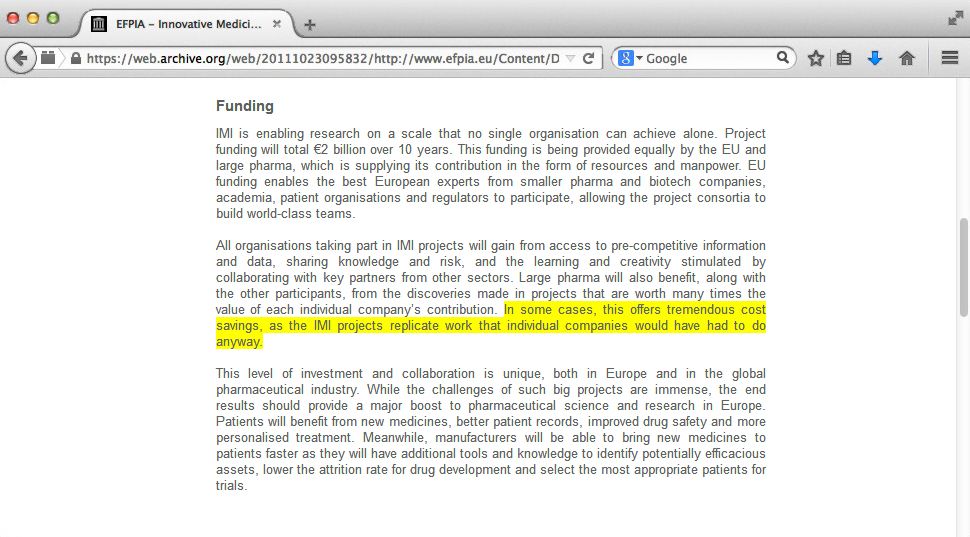