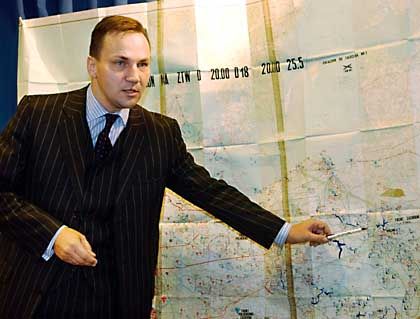 At a transatlantic conference in Brussels this weekend, Polish Defense Minister Radek Sikorski accused Germany and Russia of moving to build an undersea gas pipeline across the Baltic without regard to Poland's concerns about the project. That kind of action, he said, was reminiscent of a political tradition last seen during World War II that Poland would prefer not to see repeated, he said.

"We are especially sensitive when it comes to corridors and when Eastern Europe is treated differently than the West," the Polish defense minister told SPIEGEL ONLINE. "That's reminiscent of Locarno and the Molotov-Ribbentrop Pact. That is 20th century." The non-aggression pact between Nazi Germany and the Stalinist Soviet Union led to the division of Poland between the two powers in 1939.

The defense minister said Chancellor Merkel had offered Poland consultations on the pipeline project. But he said the chancellor had not shown any sign of a willingness to make any changes to the deal with Russia. "To first make a decision and then offer consultations is not our idea of European solidarity," Sikorski said. "We are shocked that Germany would do something that creates a disadvantage for German consumers and which is geopolitically targeted against Polish interests."

The Baltic Sea pipeline is expected to come at a cost of €6 billion to German consumers, he said, arguing that they wouldn't get anything in return for their money. Instead, the project will come at the expense of Poland's trust in its western neighbor, he argued. Sikorski accused Germany of supporting Russia in its efforts to ensure that Poland and Belarus remain dependent on Moscow for gas supplies.

Last year, then-chancellor Gerhard Schröder and Russian President Vladimir Putin cut a deal to build the pipeline. And after leaving office, Schröder accepted an offer to become the president of the supervisory board of NEGP, the consortium that will build and operate the pipeline.

The pipeline will circumvent the eastern European EU members and deliver natural gas directly from Russia to Germany beneath the Baltic Sea. Russian gas monopoly Gazprom is the leading shareholder in the project, but Germany's multinational BASF and utility company Eon are also partners.