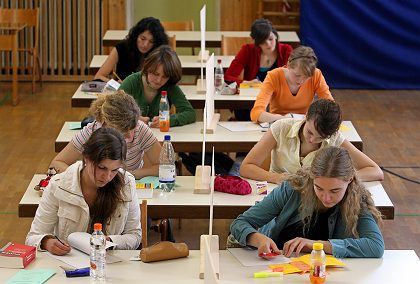 High school students in Bavaria start taking exams this week. Most immigrant students don't get that far in Germany.

The German school system fails when it comes to educating immigrant children. That is the unsettling conclusion of a report presented on Monday in Berlin by the Organization for Economic Cooperation and Development (OECD). When compared to native German students, first-generation immigrants (born outside of Germany) perform well below the average of first-generation immigrants in the 17 countries considered in the report. And the gap becomes even larger among second-generation immigrants (children with at least one parent born outside the country). Among this group, German schools' performance was right at the bottom of the survey.

The study, based on the Program for International Student Assessment (PISA) test given to 15-years-olds in 2003, is not the first time the German education system has come under fire. When the overall results of the first PISA study -- conducted in 2000 -- placed Germany in the bottom third of industrialized nations surveyed, the country went into a fit of self-doubt and outrage. While the country's education system has since then made slight improvements, Monday's study is being read as a statistical excoriation of Germany's ability to integrate its immigrants.

As soon as the results were made public, Germany's Minister of Education Annette Schavan called for more money to be spent on the country's kindergartens and schools. "We don't just need appeals," she said. "We also need a new funding concept." She also emphasized that immigrant children need more help learning the German language. "We have to provide children all over the country with a chance to improve their German knowledge even before school so they have equal access to a decent education," she said.

Head of the opposition Green Party Claudia Roth called the study results a "shame for Germany," and told the Cologne paper Kölner Stadt-Anzeiger that it was "shocking that the children of immigrants in our country have such terrible education opportunities."

Trouble for the second generation

The most disturbing aspect of the new study was the degree to which Germany's second-generation immigrants still lagged behind their native German counterparts. Only Germany, Denmark and New Zealand showed a decrease in performance from first to second generation immigrants in the four areas tested -- mathematics, reading, science and problem solving -- with German immigrant pupils by far the worst off.

"Germany is the country with the largest disparity" between first and second generation immigrants, the report says. "Second-generation students lag behind their native peers by 93 score points, which is equivalent to one and a half proficiency levels. This is particularly disconcerting, as these students have spent their entire school career in Germany."

Immigrant children in Australia and Canada posted the best marks in the study, though the socio-economic standing of immigrant families in those countries tend to be much closer to native families than in Europe. The study also found no correlation between the size of immigrant student populations in the countries studied and the size of the gap between immigrant and native student performance.

Specific criticism was levelled at the German and Austrian school systems for their practice of separating students by achievement at the age of 10. In Germany, this means that high-achieving students are placed in university track schools after the fourth grade and lower achieving students are essentially blocked from ever attending university. Many of the third-tier schools in Germany's three-level system become collection points for under-achievers, problem students and foreign students. Poor conditions at such schools have recently been splashed across the headlines in German papers.