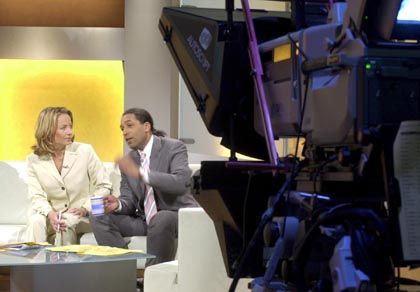 Germany's immigrants are conspicuous by their absence in the broadcast media even though they make up almost a fifth of the population.

News anchormen and women on the main channels are invariably white, and the number of immigrant presenters on other types of TV shows can be counted on the fingers of a mutilated hand.

It's a far cry from Britain, where black and Asian presenters are firmly established in news programs on the BBC and independent television channels. Even in France, not exactly a model of integration judging by last year's riots in major cities, black presenter Harry Roselmack has been hosting TV's main prime time evening news program since April.

The federal government in Berlin has woken up to the dearth of immigrant anchormen and called on broadcasters to start recruiting more foreigners as a way to help boost the integration of Germany's immigrant population.

After all, the country has around 6.76 million foreigners -- people without a German passport -- plus a further 8 million German nationals with an immigrant background such as ethnic Germans from the former Soviet Union and Turkish guest workers who took German citizenship.

"We have to make immigrants more present in German television," the government's integration minister, Maria Böhmer, told the Süddeutsche Zeitung newspaper. "I keep hearing from immigrants that they don't see themselves represented by the public sector broadcasters. There isn't enough awareness of their experience of life, and there aren't enough immigrants in front of or behind the camera."

"For example, having a Turkish anchorwoman needs to become a normal thing. We need more reporters who themselves know the immigrants' world and can convey it. The media have an obligation here."

Böhmer said she expected her conservative Christian Democratic Union party (CDU), which is led by Chancellor Angela Merkel, to include the demand in its basic manifesto due to be adopted in 2007.

Germany is far behind the United States, Canada and Britain in integrating its immigrant population says Rainer Geissler, professor of sociology at Siegen University in western Germany, who has launched a research project into the presence of immigrants in the media.

"We've only started having a public debate about immigration in the last few years," said Geissler. "During the 1980s and 1990s our policy focused on fending off asylum seekers and we overlooked that we need immigrant labor," said Geissler. "The debate was dominated by the CDU slogan 'Germany isn't a country of immigration.'"

That attitude has fundamentally changed, at least among the mainstream parties, because there's a growing awareness that the country, which has one of the lowest birth rates in the world, will become ever more reliant on foreign labor, said Geissler.

"This awareness has been accompanied by the realization that we need to integrate our immigrant population better," said Geissler. "The media can play an important part here."

He said he hadn't been able to find any data on the presence of immigrants in German media newsrooms, in contrast with copious data available on ethnic minorities in journalism in the United States and in Canada.

The public networks ARD and ZDF have pledged to start recruiting more news readers from ethnic minorities. And regional public broadcasters WDR and Südwest-Rundfunk each have an integration advisor to boost recruitment and monitor the content of programs, said Geissler.

"We don't need quotas," said Geissler. "We have to promote journalistic training for people from ethnic minorities and make the media aware that they need to hire more of them."

Germany's biggest-selling newspaper Bild on Wednesday took a tongue-in-cheek approach to the call for more ethnic variety, publishing photo montages showing some of the country's most prominent news presenters in ethnic garb including a Muslim headscarf, Indian robe and Turkish-style hat and moustache.

It even had an image of veteran journalist Peter Hahne with his face colored black and an Afro-style haircut.

"That's not exactly auspicious," said Geissler, commenting on the Bild pictures. He noted that Anglo-Saxon countries tended to show a bit more sensitivity in dealing with minority issues.

He cited the example of a 2000 regional election in North Rhine-Westphalia, Germany's most populous state, where conservative contender Jürgen Rüttgers campaigned under the slogan "Children Instead of Indians" ("Kinder Statt Inder") to oppose a plan by the federal government to attract more computer specialists from countries such as India. The CDU argued that the government should do more to train Germans rather than attract qualified immigrants.

"If a politician had uttered such a slogan in Canada or the USA he would have disappeared from the political stage the next day," said Geissler. Rüttgers lost the 2000 election but won the state in 2005 and is a powerful figure in the CDU.