We humans like to think of ourselves as a species apart. We are not like those other, lower animals. And we are especially not like our lumpen cousins the Neanderthals, seen in the popular imagination as hulking hairy creatures unable to communicate in more than the occasional grunt. 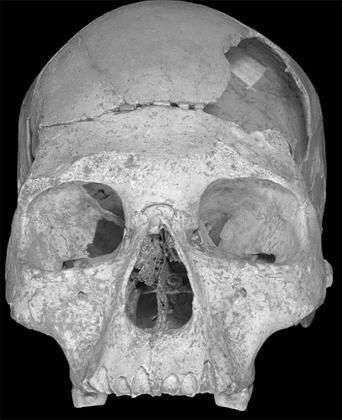 The skull, found in a cave in Romania, provides evidence that humans may have interbred with Neanderthals.

However we may have been closer -- in all senses of the word -- to our much-maligned relatives than we thought. A skull found in Romania by archaeologists includes features of both modern humans and Neanderthals, suggesting inter-breeding between the two groups. The new discovery is revealed in a paper by Erik Trinkaus of Washington University in St. Louis, published Tuesday in the Proceedings of the National Academy of Sciences.

Researchers said the skull, which is dated as being at least 35,000 years old, has the same proportions as a modern human head and lacks the large brow ridge typical of Neanderthals.

What makes the find interesting is that it also includes features which are unusual in modern humans but are characteristic of Neanderthals and other early hominids, such as frontal flattening, a large bone behind the ear, and exceptionally large upper molars.

"Such differences raise important questions about the evolutionary history of modern humans," said co-author João Zilhão of the UK's University of Bristol in a statement. He said the skull could be evidence of "evolutionary reversal" -- in other words, humans reverting to archaic forms. "They could also reflect admixture with Neanderthal populations as modern humans spread through western Eurasia," he said.

Trinkaus, Zilhão and colleagues found the skull, which is thought to be from a teenager, in the Pestera cu Oase (Cave of Bones) in southwestern Romania. The cave contained human remains mixed with bones from cave bears.

Some scientists were skeptical about the significance of the find, however. Richard Potts of the Smithsonian's National Museum of Natural History told Associated Press that there was no strong evidence of mixing of Neanderthal and human populations and "this doesn't add any." He said that the features described as unusual in modern humans were not exclusively Neanderthal and could also have been passed down from earlier populations in Africa. However Potts, who was not part of the research team, admitted that the skull was significant in being the earliest human remains found in Europe.