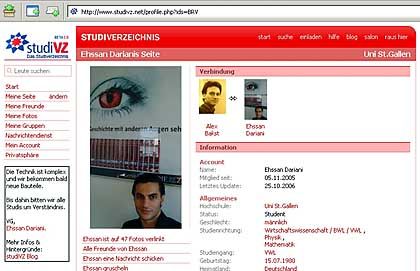 Ehssan Dariani has co-founded the fastest growing German start-up around. His profile was the first ever on StudiVZ.

At first glance, it is a profile like any other. The young bachelor lives in Berlin, loves the movie "Zoolander," listens to Bach and is a self-described "son of a gun" who is interested in "entrepreneurship." The photo shows an unremarkable, clean-cut young man with a friendly smile. It could be any one of over 10 million Facebook profiles.

But this one isn't on Facebook.com. It's on StudiVZ.net, Germany's fastest-growing Internet start-up and the first online social network for German students.

Ehssan Dariani is currently one of over 950,000 users registered at Studiverzeichnis, or StudiVZ for short. He's also the founder. The 26-year-old economics student at the University of St. Gallen, Switzerland, founded the site less than a year ago. Since then, membership numbers have shot through the roof. Dariani estimates his site is currently attracting up to 15,000 new members each day. Facebook, by comparison, adds 20,000 per day. In fact, the German project -- which Dariani started from an Internet cafe -- has grown so fast that the 50 people now working for him can hardly keep up with the demand.

"We are greatly reducing the anonymity at all colleges and universities," Dariani boasts, sounding more like a politician than an Internet entrepreneur. "The flow of information is greatly facilitated."

But it's not, of course, just about altruism. Fabulous riches can be a powerful motivator.

That, at least, is what the example of Facebook teaches us. Facebook.com, founded in Feb. 2004 by Harvard undergrad Mark Zuckerberg, may be free to users, but it is said to generate over $100 million in annual revenues and could be worth up to $1 billion were it to be sold. And because its users are all on their way to obtaining higher educations, the Web site can charge some of the highest rates in the business.

For now, StudiVZ is far from profitable. But that may soon change. While the site registered a mere 200,000 users in July, it had doubled in size by mid-August. And in September the site hit the 700,000-member mark. The young start-up wants to crack 1 million by the end of November.

For now, though, StudiVZ is surviving on venture capital from friends and supporters. It is Dariani's luck that he has some powerful ones. Lukasz Gadowski, for example, the successful founder of Spreadshirt.com; or the Samwer brothers, who rose to business-world stardom with the online auction house alando.de and the ring tone retailer Jamba!, both of which sold for hundreds of millions of dollars to eBay and VeriSign, respectively.

With StudiVZ, though, the sums involved are still comparatively miniscule. Dariani and his partner Dennis Bemmann started out with a mere €5,000 from Gadowski. And when it comes to emulating his benefactors, Dariani strikes a modest tone. "We want to keep the page free and support it with unobtrusive forms of advertising," he says of his plans for the near future. "Right now, we want to concentrate on making things run smoothly, and we've got plenty of work on our hands already."

Off to a wobbly start

The problem is that as many as two-thirds of all registered users may be logged on at the same time, according to Dariani. The servers and the site itself simply cannot keep up with the traffic. The problem, of course, is one many Internet start-ups run into. The solution? Buy more equipment.

Yet what sounds easy enough, isn't in the case of StudiVZ. Dariani's host, Telefónica/O2 has so far refused -- and he is furious. He says that Telefónica wants cash upfront before it will deliver the new servers -- despite an original installment agreement. A breach of contract, says Dariani.

Telefónica, not surprisingly, sees things differently. "It is true that there were delays in the provision of servers to StudiVZ," Telefónica spokesman Nadine Kleinert concedes. But "in our view, the performance problems on the StudiVZ Internet pages are not caused by a lack of servers, but rather by their own Web applications, which are the sole responsibility of StudiVZ," she told SPIEGEL ONLINE.

Meanwhile, the real losers are the thousands of frustrated students who can no longer access their accounts. "Awesome idea, awesome implementation. With a few servers and a little patience, the whole thing will soon be running without problems," writes Mohammad Al-Bayati from the University of Duisburg-Essen on the site's notice board.

Others aren't so forgiving. "At this point, I could just barf every time I go on this site. Nothing -- and I mean nothing -- works," writes Christin Schlenger at the Technical University of Dresden. Or, from a user in Aachen: "First you copy www.facebook.com 1 to 1 and then you can't even get the servers to work. All I can say is: LAME!"

Indeed, after the slugishness, the site's similarity to Facebook is the most common criticism of StudiVZ. And Dariani is not afraid to admit that his site is based on the American predecessor. "We may have oriented ourselves along the lines of the Facebook layout," he says. "But it was also clear from the get-go that we would strongly distinguish ourselves by other things, that we wanted to be original."

Some features are unique to StudiVZ, such as a section that tells you who most recently viewed your profile. Dariani also pioneered the concept of "Campus Captains," a group of currently 400 volunteers at universities all over Germany who are committed to spreading the word on campus. 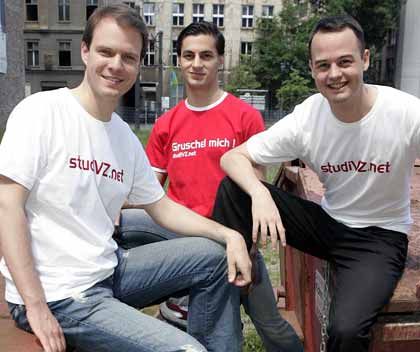 A bit of seed cash may end up going a long way for Michael Brehm, Ehssan Dariani, Dennis Bemmann, the founders of StudiVZ.

Otherwise, however, the differences are in name only. For example, on Facebook users can "poke" one another; on StudiVZ, Dariani coined the term "gruscheln" -- a popular word among users, but the function is nonetheless identical to the "poke." Dariani says he wanted to avoid "mindless Anglicisms," and hence the site's nomenclature is "strictly German."

Even Dariani's goals for the site sound familiar. "Eventually, we want to become the de facto standard form of communication for students in Europe," he says. "Maybe even more popular than e-mail and text messaging."

For now, though, the aim is that of getting the Web site to work properly and dealing with growth. Lawyers will have to be hired, a public relations department set up, a chain of command established. And then there's the nagging profitability question.

But far from being deterred, Dariani shrugs off such details and waves away accusations that he has merely created a copy of Facebook. He even has some advice for his fellow Germans. "Stop whining about having no job, or a bad job -- that's total nonsense. As far as that goes, we can learn a lot from the Americans."