DER SPIEGEL: Professor Rogoff, the European Central Bank's Governing Council has kept its key interest rate at a low level for quite some time now. How long is it going to take before saving money is once again worthwhile?

Rogoff: Indeed, the ECB policy rate is at a record low, but this is a global phenomenon. My guess is that we will see a rise of 1 or 2 percent in the global real (inflation adjusted) interest rate over the next five years. But that's not what the markets are expecting. They are predicting that rates will stay low forever.

DER SPIEGEL: Many Germans won't be happy about this. They lament what they see as an "exploitation of savers" and claim the ECB is plundering the accounts of ordinary citizens. Do they have a point?

Rogoff: Absolutely not. I know that a lot of people believe that central banks are the culprits, but it's complete nonsense. If monetary policy were the main driver behind today's ultra-low inflation-adjusted interest rates, we would be seeing upward pressure on inflation. Instead we see inflation consistently below target. So, other reasons have to be responsible.

DER SPIEGEL: Many people argue that long-term demographic and technological trends are the main reasons for the low interest rates. Do you agree?

Rogoff: We don't fully understand the reasons for the low rates. I see three factors which are important yet underrated by most analysts. The first factor is that inflation has become very low and stable, making bonds a much more desirable and stable asset. Second, bond markets are very sensitive to fears of disaster of any type, like cyberwar, climate catastrophes or Donald Trump. There is no question that people today are more nervous than they used to be. The third factor is emerging markets. Their desperate need for safe assets is causing them to invest heavily in rich countries' bonds. Whereas all these trends help explain ultra-low rates to a certain degree, it remains quite surprising just how far interest rates have fallen. The ECB's decisions to lower their key rates are the consequence, not the cause of the low interest rates.

DER SPIEGEL: Late last year, the ECB lowered its deposit rate to a record low -0.5 percent and restarted bond purchases. Do you think these measures were appropriate?

Rogoff: The ECB carries a huge burden because it is not only performing monetary policy but also has to replace the missing eurozone-wide fiscal policy, to some degree. In buying the bonds of member countries, the ECB is effectively creating a kind of Eurobond, in which stronger governments support some of the debt of weaker governments. I think that's fine, but the monetary effect is very limited. For stimulating the economy, it's a very weak tool.

DER SPIEGEL: Some economists think the ECB's current policies do more harm than good, especially for banks hurt by the low rates.

Rogoff: I disagree. In reality, the ECB's negative interest rate policy right now is not doing much good or harm. Contrary to what the bank lobbyists are saying, the banks are now able to pass the low rates onto their bigger customers. Furthermore, they are profiting from the lower rates when borrowing on wholesale markets, through higher values of their assets and an upswing in their credit business. Virtually every recent study has found that for most banks, profits have not been hit that severely.

DER SPIEGEL: Some economists are warning that low rates are causing asset bubbles in housing and equity markets. Are these fears reasonable?

Rogoff: What I am more worried about are risks piling up if interest rates suddenly rise. That would cause a lot of problems in many pockets of the global economy. For example, some emerging markets are overextended, and even in richer countries, a number of sectors will have problems if interest rates rise. Let's not forget: We have been in an era in which interest rates keep falling and markets are beginning to count on "lower forever." Anything that reverses the trend fall in interest rates will be a rude shock and a big risk for the world economy. A significant upward shift in global interest rates, whatever the cause, would almost certainly cause a global recession.

DER SPIEGEL: New ECB President Christine Lagarde has announced a reassessment of the ECB's policy. What would you recommend?

DER SPIEGEL: But that would hurt savers even more.

Rogoff: Not when you adjust your regulations properly to the reality of negative rates. Banks need a way to insulate small depositors from negative rates and should to be subsidized for doing this. It is not necessary to pass on negative rates to 99 percent of ordinary people or businesses for the policy to be effective. You have to pass them to the big players: the pensions funds, insurance companies, financial firms. Furthermore, central banks have to work together with their governments to adjust the banking and taxation rules, many of which were designed without negative rates in mind.

DER SPIEGEL: Is such a scenario realistic?

Rogoff: Well, many central bankers are thinking about negative rates. They are doing it loudly because they don't want to scare markets. But everyone recognizes that next time there is a catastrophic recession or systemic financial crisis, central banks will need to find more effective tools than they now have.

DER SPIEGEL: That would be a fairly massive experiment with unknown results.

Rogoff: Not so much as many people think. A recent IMF study showed that in advanced economies, real interest rates were negative about half the time over the last 200 years. Negative real rates (Eds. Note: the interest rate minus expected inflation) are hardly an unusual anomaly. But historically, inflation was much higher. The need for negative nominal interest is the flip side of the fact that inflation is very low. If prices were rising at 10 percent, I promise you interest rates would not be negative.

DER SPIEGEL: How could the ECB make the idea of negative interest rates more popular, especially in countries like Germany with cultures of saving?

Rogoff: In a crisis, the ECB should not bet running a popularity contest. In general, its job is to stabilize inflation, to prevent a financial crisis and to promote growth across the eurozone. It would be a big mistake if the ECB, or any central bank, were to reject the idea of negative rates. And it will happen. Look to the history of currency policy. No one was talking about flexible exchange rates when Milton Friedman started writing about it in the early '50s. Floating exchange rates were not popular back then either. People thought they would bring down the financial system. They didn't. Instead, floating exchange rates solved a lot of problems. I think it would be much the same with the transition to allowing for negative interest rates in a deep recession.

DER SPIEGEL: Otherwise the ECB has no ammunition left.

Rogoff: Indeed, otherwise there is not much the ECB can do. If you look at the ECB's language, they now label the interest rate as their primary monetary tool and the bond buying program as a supportive, secondary tool. That is an important nuance and a first step into the right direction.

DER SPIEGEL: Some economists are favoring other measures, for instance direct transfers of money to households -- so-called "helicopter money." What do you think of this idea?

Rogoff: Central bankers are unelected officials. They have powers during extreme emergencies, but they do not have the democratic accountability to make decisions like that. Which households should get what amount of money? Allocative decisions like this need to be made by fiscal authorities, by elected government officials. Another mistake would be to force the ECB to monetize government deficits, as some left-leaning economists and politicians are advocating. If European governments want to spend more money, great. But it is not for the unelected ECB to decide.

DER SPIEGEL: Some economists argue that in a world of low interest rates, it's not monetary, but fiscal policy that should act. In other words, governments -- not central bankers. Are they right?

Rogoff: Fiscal policy has an important role to play, but it is much too political for the kind of fine-tuned, carefully balanced surgical decisions that are possible with monetary policy. Look in my country where there is a civil war about every fiscal decision: How can they possibly agree consistently on how to manage spending, taxes and transfers for balancing the ups and downs of the business cycle? Maybe there will be a truce if there is a crisis, or maybe political divides will get worse. From this side of the Atlantic, it seems like your political battles are not as crazy as what's going on over here. Still, in Europe you have to get cooperation and coordination from all of the eurozone governments. There is no Europe-wide fiscal authority. There is no reliable alternative to monetary policy in times of deep recession or severe crises.

DER SPIEGEL: Is the eurozone well enough equipped for such events?

Rogoff: Perhaps, but the eurozone remains quite fragile. Let's suppose there is a sharp decline in China. This would be a catastrophe for Europe, which is quite dependent on exports to China, especially Germany. There would likely be a global recession, putting tremendous pressure on weaker members of the eurozone.

DER SPIEGEL: Political leaders in Europe are saying they will take radical steps once it's necessary.

DER SPIEGEL: What has to happen?

Rogoff: Again, the first thing is making the needed changes for negative interest rate policy to function. Second, there has to be greater fiscal and political union, otherwise the eurozone is very difficult to manage, particularly when severe and outside-the-box crises hit. Greater political union will likely imply more transfers form richer to poorer countries. I know, this will be difficult news for Germans to swallow, but the eurozone is just not sufficiently stable in the current situation.

DER SPIEGEL: Could the euro stand another financial crisis like the one in 2008?

Rogoff: Maybe, maybe not. The eurozone survived after 2008, but just barely. The banking sector is still quite weak, euro-wide political institutions are grossly underdeveloped. I don't believe the euro is sustainable over the next 50 years without greater cohesion. True, if there is a severe crisis tomorrow, the European leaders would probably find a way. But there is a risk, maybe a 30 percent chance, they wouldn't. 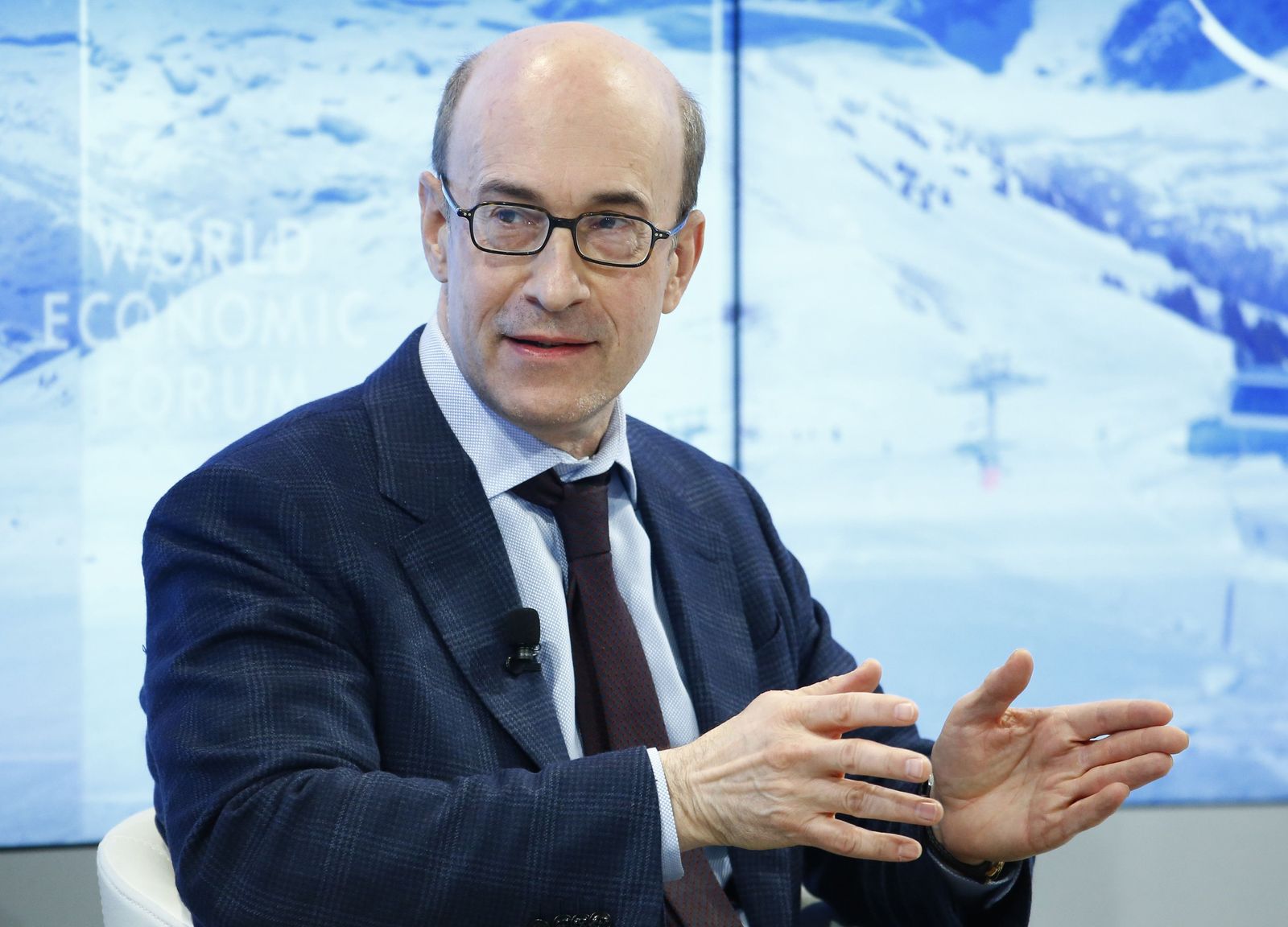