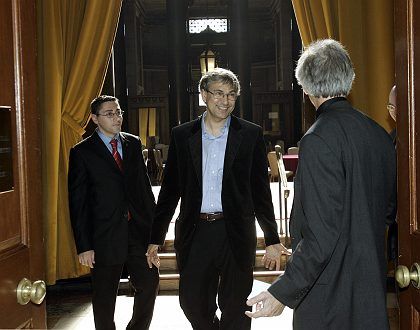 SPIEGEL: Where did the Nobel Prize Committee reach you with the news about the prize?

Pamuk: I was still asleep. I have been in New York for about 10 days now, to teach a semester of creative writing at Columbia University. It's still early morning here. It was a call from my American agent that woke me with the news. I haven't even managed to take a shower yet.

SPIEGEL: British bookies considered you a favorite this year, since you already were a top candidate in 2005. Did you actually think you might get the prize this time around?

Pamuk: Unfortunately, I've been asked about the prize a lot lately. Though I'd rather they not have, friends, journalists - oh, just about everyone -- talked about the possibility that I would receive the prize. It was a pleasant burden, but really in the end somewhat annoying, and it left little room for much anticipation. Now, though, the conjecturing has fortunately come to an end. It's a great relief for me that no one will ask me anymore: "Orhan, when will you get the Nobel Prize?"

SPIEGEL: A number of previous prize winners have declined to go to the ceremony in Stockholm. You, though, have indicated you are happy to go to Sweden?

Pamuk: But of course. I am very aware of the honour connected with this recognition. I will travel with my daughter Rüya, just as I did for last year's presentation of the Peace Prize of the German Book Trade in Frankfurt am Main. Seriously, it will be great fun. I am very much looking forward to it.

SPIEGEL: Have you already thought about what ideas from your writings might form the framework of your acceptance speech?

Pamuk: In terms of format, I am currently looking at an essay -- a think piece in fine European tradition. I hope the prize will give me time to fulfil this ambition. I can't say anything yet about the content, but I will use the opportunity to present my views.

SPIEGEL: You are among the most beloved, but also the most controversial authors in Turkey. What do you expect the reaction to be back home?

Pamuk: This award should elicit approval and delight in Turkey. We should celebrate this as an honor for Turkish literature, which has a great history and great import. I write in the Turkish language; I am part of this literature and represent it as a prizewinner.

SPIEGEL: Your critical views of your own country also have made you some enemies. Won't this prize lead to yet more bile from your detractors?

Pamuk: More than anything I am a novelist. But for me, an author's job is not only to create linguistically accomplished works. As an author I also want to stimulate discussion.

SPIEGEL: You often address Islam and religion in your works. Do you think this had something to do with your having been awarded the prize?

SPIEGEL: In November, your book about your home city of Istanbul -- a city that links Asia and Europe like none other -- will appear in Germany...

Pamuk: ... and I am very pleased that the Nobel Prize Committee, in elucidating their decision, expressly referred to my depiction of Istanbul as a symbol for cultural integration.