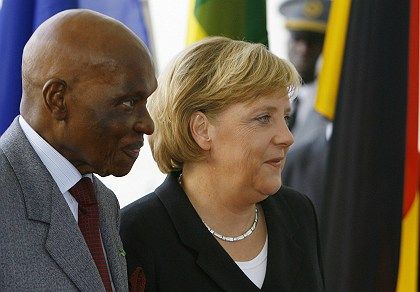 SPIEGEL ONLINE: Mr. President, many talk about what Europe and the world can or should do to help Africa, especially with illegal immigrants making headlines in their struggle to reach Europe. But surely Africa has something to offer Europe?

President Abdoulaye Wade: Europe would benefit greatly from turning more to Africa. The world is evolving such that the upcoming big powers will be the US, China, India, and possibly Brazil. Europe is not one of the major powers. And Africa even less so of course. But Africa has what Europe lacks: space, human resources, and natural resources while Europe has the technological innovation that Africa lacks. Together we can become a power which can count in the future. Im not interested in being sentimental about Africa. Im an economist and I am here because Germany has a role to play economically and financially. The discussions I had in Berlin show that we have a lot in common

SPIEGEL ONLINE: What do you need from Europe?

Wade: We are ready to accept precise forms of help. I dont want money, and I dont want hand-outs. I want trade agreements with European firms who will come to Senegal and work with African firms. Anything else is a waste of time.

SPIEGEL ONLINE: During your visit you have talked a lot about the biggest problems facing Africa and Europe. One of them is migration: Thousands of young Africans risk their lives just to get to the Canary Islands and other European territories. Three thousand illegal migrants from West Africa arrived in the Canary Islands in the last month alone while dozens of others have lost their lives trying. You have said that you want to keep these young people in Africa. How do you propose to do that?

Wade: As soon as these migrations started happening, I opened talks with Spanish Prime Minister Rodriguez Zapatero and we reached an agreement. I told him that we did not want to lose our young people and that Senegal would do everything in its power to keep the migrants here by launching job programs. And Spain promised to provide three ships and one helicopter for surveillance and to bring people back. We promised to build landing bases to receive them. But unfortunately, the Spanish government has not respected this agreement. Senegal was attacked in the Spanish press and blamed for the agreement having failed, but it turns out -- and Zapatero admitted this when we spoke -- that the failure was the fault of Spanish bureaucracy. I am also having discussions with the French government about how to get our students to return to Senegal after their studies in France. We are in total agreement on 80 percent of the points raised. And this is what I said to Chancellor Merkel. We Africans take the same stance on migration as you do in Europe.

SPIEGEL ONLINE: You are running for re-election right now as Senegal prepares for elections next year. What is your vision for your country?

Wade: My campaign is quite clear. My vision is that Senegal develops itself agriculturally. We have land, we have water, and we have people. We have always imported food goods and I want to get to the point where we are exporting them. Europe needs a lot of agricultural goods and we have immense resources. In particular we are focusing on organic farming for export to the US and Europe. Returning our focus to agriculture is the best way of creating jobs. Since 2002, every year we have managed to double our volume of foreign investment. On a macroeconomic level we now have a model economy, an inflation rate of between 0.5 and 1 percent and no budget deficit. We need to support our agricultural economy and thats where Europe can help us. We have concrete projects, such as providing water but such projects are expensive. We have the young people who can come and work on these projects, but we also need European materials and foreign companies to come in.

SPIEGEL ONLINE: But you are clearly not going to be able to lure graduates back to Senegal from France by offering them agriculture?

Wade: When I look around at these major projects which are being set up in Senegal right now, they are all being run by young graduates who have come back after having studied at international institutes in the US and France. For some of them this is their first job. They want to come back and my problem is finding good enough jobs for all of them. The young people who are migrating in boats to the Canary Islands are not graduates. Our objective is to give them a chance to earn money quickly. I met up with some of them who had been brought back from Spain. I asked them what it was all about. They said, 'Mr. President, we have no work here. We have to do something. If you give us jobs we will stay. The other thing is that there are prejudices against the traditional peasant life which our grandfathers lived.' But modern farms are different. I know graduates in Senegal, who have banana farms, and have come back with new ideas and use modern materials.

SPIEGEL ONLINE: You invited a group of German investors to visit your country. Germany is one of the worlds leaders in renewable energy. Does Senegal have potential interest in this field?

Wade: We have solar power, and we are doing everything in our power to support it. Right now we have 1,400 solar powered television sets. But it is expensive. What I said to the German investors is that they need to reach out to villages all over the country. We have 24,000 villages in Senegal, and they could all use solar power. My aim is to use solar power for heating, for schools, for public buildings. This I will do because it is in our interests. We dont have oil, which is why I helped created set up an organization of non-oil producing countries, with the aim of developing alternative energy sources and solar power. Thats why I invited those German companies to Senegal. I told them, we are ready to work with you.

SPIEGEL ONLINE: Do you think that Senegal has what it takes to become a model for the entire continent of Africa?