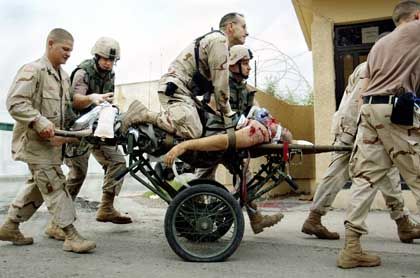 Images like this have rarely appeared in the world's media

This is a war the Bush administration does not want Americans to see. From the beginning, the U.S. government has attempted to censor information about the Iraq war, prohibiting photographs of the coffins of U.S. troops returning home and refusing as a matter of policy to keep track of the number of Iraqis who have been killed. President Bush has yet to attend a single funeral of a soldier killed in Iraq.

To be sure, this see-no-evil approach is neither surprising nor new. With the qualified exception of the Vietnam War, when images of body bags appeared frequently on the nightly news, American governments have always tightly controlled images of war. There is good reason for this. In war, a picture really is worth a thousand words. No story about a battle, no matter how eloquent, possesses the raw power of a photograph. And when it comes to war's ultimate consequences -- death and suffering -- there is simply no comparison: a photo of a dead man or woman has the capacity to unsettle those who see it, sometimes forever. The bloated corpses photographed by Mathew Brady after Antietam remain in the mind, their puffy, shocked faces haunting us like an obscene truth almost 150 years after the soldiers were cut down.

"War is hell," said Gen. Sherman, and everyone dutifully agrees. Yet the hell in Iraq is almost never shown. The few exceptions -- the charred bodies of American contractors hanging from a bridge in Fallujah, the blood-spattered little girl wailing after her parents were killed next to her -- only prove the rule. Governments keep war hidden because it is hideous. To allow citizens to see its reality -- the shattered bodies, the wounded children, the incomprehensible mayhem -- is to risk eroding popular support for it. This is particularly true with wars that have less than overwhelming popular support to begin with. In the case of Vietnam, battlefield images played an important role in turning the tide of public opinion. And in Iraq, a war whose official justification has turned out to be false, and which a majority of the American people now believe to have been a mistake, the administration would prefer that these grim images never be seen.

But the media is also responsible for sanitizing the Iraq war, at times rendering it almost invisible. Most American publications have been reluctant to run graphic war images. Almost no photographs of the 1,868 U.S. troops who have been killed to date in Iraq have appeared in U.S. publications. In May 2005, the Los Angeles Times surveyed six major newspapers and the nation's two leading newsmagazines, and found that over a six-month period, no images of dead American troops appeared in the New York Times, Washington Post, Los Angeles Times, St. Louis Post-Dispatch, Atlanta Journal-Constitution, Time or Newsweek. A single image of a covered body of a slain American ran in the Seattle Times. There were also comparatively few images of wounded Americans. The publications surveyed tended to run more images of dead or wounded Iraqis, but they have hardly been depicted in large numbers either.

There are a number of reasons why the media has shied away from running graphic images from Iraq. Some are simple logistics: There are very few photographers in Iraq. Freelance reporter and photographer Mitchell Prothero, a Salon contributor, estimates there are "maybe a dozen or two Western photographers" in Iraq, in addition to Iraqi and Arab stringers, who do most of the work for newswires. Ten or 20 photographers trying to cover a country the size of Sweden, under extremely difficult and dangerous conditions, are unlikely to be on the scene when violence erupts.

One photographer, who requested anonymity because he didn't want to jeopardize his ongoing relationship with the U.S. military, told Salon, "I've had unit commanders tell me flat out that if anybody gets wounded on patrol, you can't take any pictures of them. Nearly every time I've landed at [a medevac] scene, guys have yelled at me, 'Get the fuck away from me. Don't take my friend's picture. Get back on the helicopter.' Part of me understands that. I am a stranger to them. And they are very emotional. Their friend has been badly hurt or wounded, and they've probably all just been shot at 15 minutes before. I totally understand that, although it is a violation of embed rules."

But it isn't just the troops. Editors in the States are reluctant to run graphic photographs. There are various reasons for this. Perhaps the most important is taste: Many publications think graphic images are just too disturbing. Business considerations doubtless also play a role, although few editors would admit that; graphic images upset some readers and can scare off advertisers. (Salon pulled all advertising, except house ads, off the pages of this gallery.) And there are political considerations: Supporters of the war often accuse the media of playing up bad news at the expense of more positive developments. To run images of corpses is to risk being criticized of antiwar bias. When "Nightline" ran photographs of the faces of all the U.S. troops who had been killed in Iraq, conservative groups were enraged and accused the network of harming morale. Not every publisher is anxious to walk into this kind of trouble.

The reluctance of American publications to run shocking images contrasts with the European press. "In my experience and in conversations with other people who've been doing this a lot longer than me, American publications shy away from extremely graphic material, compared to European ones," says Prothero. "I don't know whether the American audience reacts more strongly against seeing that over the breakfast table. I do know, anecdotally, that many very talented photographers, on staff, have taken pictures that have not run in magazines or newspapers. Maybe it's not a conscious decision but American publications very much shy away from showing casualties of U.S. troops on the ground. I think they're afraid the American public will freak out on them for showing dead American boys."

Photographer Stephanie Sinclair's unforgettable photograph of a 6-year-old Iraqi girl killed by an American cluster bomb, which appears in the gallery, originally ran in the Chicago Tribune. Robin Daughtridge, the Tribune's deputy director of photography, told Salon that after the photographs first came in, "the news editor was worried about running them without an accompanying story." Others in the newsroom thought the photographs "were too graphic, and too much, because we generally don't run tight pictures of dead bodies. We had run pictures of dead Iraqi soldiers and a dead bus driver before, so there was a precedent for running them, but we don't take it lightly." They ended up calling the paper's editor in chief, Ann Marie Lipinski, who assigned a reporter to do a piece on cluster bombs and their legacy.

Ultimately, Daughtridge said, politics didn't enter into the decision: "It was more about the fact that if we're going to show this death up close and personal, we better have a story behind it. All of us in the newsroom are trying to tell the story and letting the readers make up their own minds." She added, "I felt proud of what we did that day. All of this stuff that you hear about happening to families in Iraq doesn't really hit home until you see that picture of the little girl."

For her part, Sinclair praised the Tribune for running the photo and the story. But, she said, "some of the publications I've worked for didn't run a lot of the Iraqi civilian stuff, the graphic pictures, the emotional pictures. I found that the Iraqi civilian story was really hard to get published in U.S. publications. And I worked for many. I don't know why. I think they're looking at their readership and they think their readers want to know about American troops, since they can relate to them more. They think that's what the audience wants."

Sinclair also noted that American readers and viewers get only a sanitized view of the horrific consequences of suicide bombings. "A lot of the bombing stuff that you see is really toned down. To be honest, sometimes it should be. God, it's relentless. It's hard to look at. People have no idea what's happening in Iraq. You wonder, even as a photographer, if you're being gratuitous by photographing some of this. At the same time, as horrific as it is to see, people should know how horrific it is to live it every day. We should feel some sort of responsibility to make sure we have the best possible grasp of what's happening there."

It is because we believe that the American people are not getting a look at the reality of the Iraq war, for Americans and Iraqis alike, that we decided to run this photo gallery. It is no secret that Salon has published many more pieces questioning and challenging the Iraq war than supporting it. But that is not why we think it is important that these images be seen. We would have run them even if we supported the war. The reason is simple: The truth should be told. People should know the truth about war. Before a nation decides to go to war, it should know what its consequences are.

There is no way for any journalist, whether reporter or photographer, to capture the multifaceted reality of Iraq. But all of the journalists I have spoken to who have worked in Iraq say that the blandly optimistic pronouncements made by the Bush administration about the situation in Iraq are completely false. A picture of a dead child only represents a fragment of the truth about Iraq -- but it is one that we do not have the right to ignore. We believe we have an ethical responsibility to those who have been killed or wounded, whether Iraqis, Americans or those of other nationalities, not to simply pretend that their fate never happened. To face the bitter truth of war is painful. But it is better than hiding one's eyes.