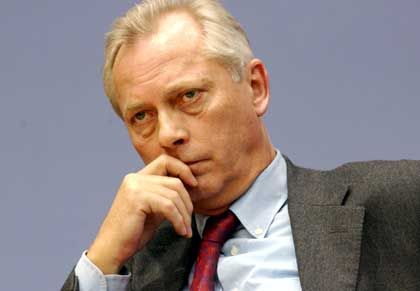 It doesn't take much to try Germany's patience in the weeks leading up to the World Cup soccer championships. Nerves are especially raw when it comes to comments and incidents that cast doubt on the country's hospitality and its openness to the millions of international guests expected to descend on the country in June. On Wednesday and Thursday, that sensitivity was laid bare for all to see.

A former government spokesman on Wednesday suggested that dark-skinned visitors to Germany should consider avoiding the eastern part of the country where racism runs high. "There are small and medium-sized towns in Brandenburg, as well as elsewhere, which I would advise a visitor of another skin colour to avoid going to," said Uwe-Karsten Heye, who now leads an anti-racism organization called "Show Your Color." "It is possible he wouldn't get out alive."

The comments came as part of an interview with the public radio station Deutschlandradio Kultur about how right-wing extremism and racism can be combated in Germany. Heye also said there was an increasing tendency in the country to look the other way when it comes to right-wing violence. His comments about "no-go" areas in Germany came as a response to a question about whether tourists from Togo or the Ivory Coast should feel comfortable travelling anywhere in Germany.

But by specifically mentioning Brandenburg, the eastern German state surrounding Berlin, Heye ensured a swift reaction. The governor of Brandenburg, Matthias Platzeck, called Heye's statements an "unjustifiable slandering of entire regions within Brandenburg." The state's Interior Minister Jörg Schönbohm demanded Heye's resignation from "Show Your Color." And even the Turkish-German parliamentarian Ekin Deligöz from the Green Party warned against overstating things. "That's want they want," he said referring to right-wing extremists. "They want foreigners to stay home and not even to come to Germany in the first place."

The uproar comes just weeks after an apparently racist attack against an Ethiopian-German in the Brandenburg state capital of Potsdam, just outside of Berlin. Almost a month after the attack, the victim remains in hospital with severe head injuries. Earlier this week, reports of a racist attack on an Italian in Berlin once again stirred up opprobrium, though it was later revealed that the alleged victim may have invented the incident.

And most are willing to admit that there are parts of Germany with a very real problem with racism. Daniel Cohn-Bendit, a Green Party representative in the European Parliament, came to Heye's defense by saying: "The reality is school classes with many immigrant children question whether it is safe to go to Brandenburg or Mecklenburg-West Pomerania" -- another state in eastern Germany -- "for camping trips."

Yonas Endrias, a member of Germany's African Council, likewise supported Heye. "None of us blacks would go on an outing in Brandenburg," he said. "There is also racism in western Germany, but as a black person, the chances of being attacked in an eastern German village are much higher." Following the Potsdam attack in April, the Africa Council spoke of areas in eastern Germany which blacks should avoid.

On Thursday, as a reponse to the furor, Heye clarified his remarks by saying he didn't intend to single out Brandenburg. He also praised the state's extensive efforts to combat right-wing extremism. But he didn't back down. "We cannot make it the responsibility of the victims to decide how to defend themselves from racism and anti-Semitism," he wrote in a statement for the online version of Vorwärts, a Social Democrat Party publication which he edits. "This is the responsibility of the pluralistic society. Unfortunately, the tendency to look away has increased."