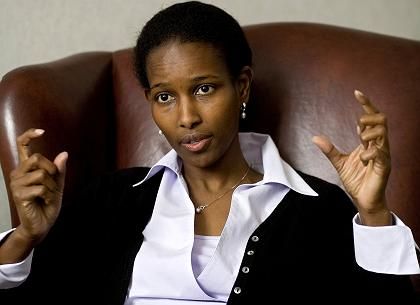 Ayaan Hirsi Ali has had enough of the Netherlands. She's off to America.

Ayaan Hirsi Ali, the Dutch parliamentarian who became the target of radical Islamists for writing an Islam-critical screenplay, is planning to resign from her elected office and leave the Netherlands for the United States.

According to information obtained by SPIEGEL ONLINE, Hirsi Ali will make a public statement announcing her resignation on Tuesday. The move allegedly comes as a result of disillusionment caused by recent reports taking a critical look at her original entry into Holland in 1992. A television report aired last Thursday claimed that Hirsi Ali only received political asylum in the Netherlands because of false statements she made in her application.

According to a report in the Monday issue of the Dutch newspaper De Volkskrant, Hirsi Ali has accepted a post at the American Enterprise Institute, a conservative Washington-based think tank. Since late 2004, she has been forced to keep a low profile in Holland after Islamist extremists murdered filmmaker Theo van Gogh for making "Submission," which included images of naked women with Koran verses painted on their bodies. The script for the film came from Hirsi Ali -- and she was explicitly threatened in the note found stabbed into van Gogh's chest.

When Hirsi Ali applied for asylum, she claimed she was fleeing civil war-torn Somalia. But she had already long held refugee status in Kenya -- and she faced no danger in Germany, the country through which she travelled on her way to the Netherlands. Additionally, the TV report claimed, she applied for asylum using a fake name. Her actual birth name, the program claimed, was Ayaan Hirsi Magan.

The revelations aired by the television station aren't new. Four years ago, Hirsi Ali admitted that she had falsified her asylum application in order to escape a forced marriage. "Yes, I did lie to get asylum in Holland," Hirsi Ali told the Associated Press over the weekend. "This has been public knowledge since at least September 2002." Political opponents said Hirsi Ali should be kicked out of parliament and her citizenship status revoked.

Hirsi Ali became a naturalized Dutch citizen in 1997 and has served as a member of the Dutch parliament in The Hague as a representative of the Party for Freedom and Democracy (VVD) since 2002.

It's been a tough couple of weeks for Hirsi Ali, who was wrapping up a book tour in the United States as the information resurfaced. A few weeks ago, a court ruled that she could be evicted from her apartment in the Dutch capital. Neighbors had complained that they felt harassed by the police who guard her apartment and the court gave Hirsi Ali until August to clear out.

Ali has been honored a number of times for her outspoken criticism of the treatment of women in Islam. The best-selling author of "The Caged Virgin: An Emancipation Proclamation for Women and Islam," was raised in a strict Muslim family and was subjected to genital mutilation in her youth. She was raised in Saudi Arabia, Ethiopia and Kenya. When she was 23, her family ordered her to marry a Canadian cousin, but she escaped in Europe and established a new life here.

Holland's controversial immigration minister, Rita Verdonk, said that if she had been minister at the time of Hirsi Ali's application, she would have expelled her from the country. But now, she argues, too much time has passed. She said her ministry would investigate the case but that Hirsi Ali would have little to worry about.

Nevertheless, as the headline in De Volkskrant declared: "Holland has grown too small for Hirsi Ali." Instead she's going to try her luck in America.