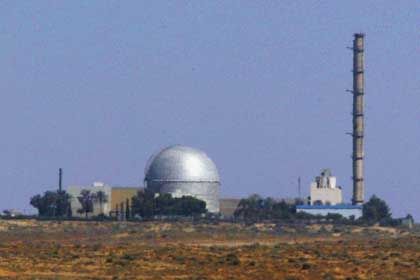 The Dimona complex in the Negev Desert.

"So what else is new?" That seems to be the laconic reaction of many in the world to Israeli Prime Minister Ehud Olmert's seeming admission over the weekend that Israel possesses nuclear weapons. For Mordechai Vanunu, a former employee at Israel's Dimona nuclear complex in the Negev Desert, Olmert's slip-up is little more than an example of the "absurdity of political life" in Israel, he told SPIEGEL ONLINE in an interview on Tuesday.

Vanunu was the source for an exhaustive 1986 story in the Sunday Times about Israel's nuclear weapons arsenal. Even as Israel officially denied the story, the country's secret service, the Mossad, arrested Vanunu and he ultimately spent 18 years in prison for treason -- 11 of them in solitary confinement. Now, it looks as though Israel's prime minister himself has let the cat out of the bag.

Vanunu, who was released from prison in 2004 and lives in a Christian convent in Jerusalem, is still in no way a free man. He is not allowed to leave the country, has frequently been placed under house arrest and is prohibited from having contact with foreigners and from giving interviews. But Olmert's comments during an interview with a German television station over the weekend -- in which he seemed to lump Israel together with nuclear powers Russia, France and the US -- has given cause for Vanunu to ignore the prohibition. 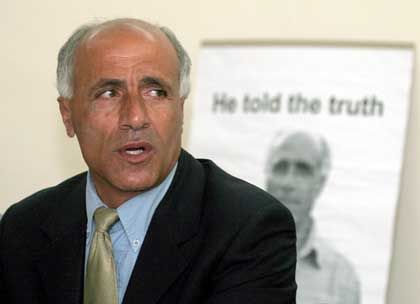 Mordechai Vanunu spent 18 years in prison for exposing the secrets of Dimona.

"If the prime minister has said it, why should I not be allowed to say it?" he asks. In any case, everyone else already knows what Olmert now seems to have admitted, Vanunu says.

Israel's official position has long been that of ambiguity. When commenting on nuclear weapons, the government uses some version of the formula, "Israel won't be the first to introduce nuclear weapons to the Middle East." But many have long assumed that Israel, which is not a signatory to the Nuclear Non-Proliferation Pact, possesses dozens of nuclear warheads. Indeed, it is suspected in some circles that Israel may even have been involved in South Africa's nuclear tests in the 1970s.

Nevertheless, Vanunu's leaking of information on the Dimona complex was taken seriously. The sprawling installation is under such tight security that vehicles driving by the perimeter fence aren't even allowed to stop on the side of the road.

Vanunu, though, provided outsiders with a peek inside Israel's secret of secrets. Prior to the Sunday Times story, even the CIA didn't know the true dimensions of the facility -- parts of which are buried 23 meters under ground. The site was even visited a number of times by United States Congressmen in the 1960s, and they were allowed to tour the two floors which were above ground. But they never suspected the existence of the seven floors below ground -- the entrances were carefully hidden prior to any visits.

Vanunu lost his job at Dimona as a result of budget cuts, converted to Christianity and began traveling the globe -- visiting Thailand, Nepal, Australia and elsewhere. All the while, he carried secret photos of the nuclear complex. Upon making the acquaintance of a Sunday Times journalist, he unveiled Israel's nuclear secret and handed over the images. The story was published on Oct. 5, 1986. And not long after, Vanunu was nabbed by the Mossad in Rome, taken to Israel for trial, and sentenced to 18 years in prison.

"Of course it's not fair, says Vanunu now. As far as he is concerned, he spent almost half of his life in jail for revealing something that, as he says, everyone knew already -- and which now seems to have been confirmed at the highest of levels. "But what can I do? The last 20 years belong to the past," he says.

Now, he hopes that Olmert and Israel will be confronted more often with questions about its nuclear capabilities and that the "hypocrisy," as he sees it, will come to an end. "That would help me to lead a normal life," he says. He would love to be able to travel and speak freely again.

But he may be hoping for the impossible. Israeli government officials have been hard at work in recent days claiming that Olmert was misunderstood, that the quote was taken out of context and that Israel won't be the first to introduce nuclear weapons to the Middle East. It looks like ambiguity may win out in the end after all.