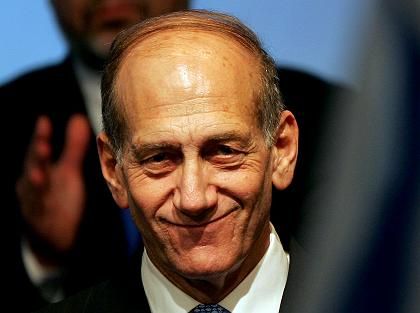 Interim Prime Minister Ehud Olmert has won Israel's election with his Kadima party getting 28 seats in the 120-member parliament.

His victory was less convincing than expected but nevertheless showed that Israeli voters, exhausted by the Palestinian uprising over the last five years and worried by the rise to power of militant Hamas in the West Bank and Gaza Strip in the January elections, have accepted Olmert's plan to give up parts of the West Bank and impose a border on the Palestinians if the peacemaking gridlock continues.

He was speaking in front of a giant portrait of former Prime Minister Ariel Sharon who founded Kadima, which means "Forward" in Hebrew. Sharon suffering a stroke in January that left him into a coma, and Olmert has vowed to carry on his work.

In the absence of progress toward peace, Olmert aims to set Israel's final frontier by 2010 by removing isolated settlements in the occupied West Bank while at the same time expanding bigger blocs there.

With 99 percent of votes counted, official results showed Kadima with 28 seats and center-left Labor with 20. The right-wing Likud emerged as the loser with 11 seats. Meanwhile, the ultra-Orthodox Shas party got 13 and far-right Israel Beitenu 12 seats.

Kadima's showing was weaker than the 44 seats opinion polls had once predicted it would win. He is expected to seek a coalition with small parties ranging from ultra-Orthodox Jewish factions to a pensioners' rights group. Such an alliance would enable Olmert to avoid negotiating with right-wing parties opposed to any withdrawal from West Bank land that settlers see as a birthright. 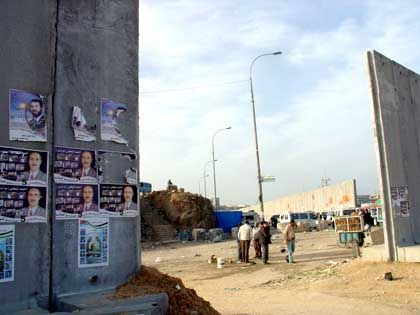 Fortified barrier under construction in Israel.

Palestinians say a unilateral strategy of tracing a border along a fortified barrier Israel is building inside the West Bank would deny them a viable state.

Olmert, appealing in his speech to Palestinian President Mahmoud Abbas, said Jews had aspired for thousands of years to create a homeland throughout the Land of Israel, biblical territory that includes the West Bank.

"But acknowledging reality and circumstances, we are ready to compromise, to give up parts of the beloved Land of Israel ... and evacuate, with great pain, Jews living there, to create the conditions that will enable you to fulfil your dream and live alongside us in your own state," Olmert said.

If the Palestinians did not move toward peace, he said, "Israel will take its destiny in hand" and set permanent borders after lobbying the United States and others for support.

The results were a setback for the Likud's leader, former Prime Minister Benjamin Netanyahu, who pledged to stay on as Likud chief, a post he regained only three months ago after then-Prime Minister Ariel Sharon quit the party amid an internal revolt over Israel's Gaza pullout.

Three years ago, no one would have believed that the corporate attorney named Olmert would have a political future. He barely made it into parliament as the final politician on the right-wing Likud Party's list. He had challenged Sharon for the party leadership and was soundly defeated. And with poverty and political tension on the rise, he was seen as a failure after ten years as Jerusalem's mayor.

Some 60,000 West Bank settlers could be affected by Olmert's plan -- far more than the 8,500 removed from Gaza. Around 240,000 Israelis live among 2.4 million Palestinians in the West Bank, territory Israel captured in the 1967 Middle East war.