Notorious British right-wing historian David Irving was sentenced by a court in Vienna on Monday for denying the full extent of the Holocaust. The verdict has sparked new debate about whether such views should be protected by western values of free speech. Both Germany and Austria outlaw Holocaust denial, as well as Nazi symbols, music and literature.
Some European commentators have called the ruling against Irving hypocritical in light of the recent uproar surrounding the right to publish caricatures of Islam's Prophet Muhammad, which has offended Muslims around the world. SPIEGEL ONLINE spoke with one of Germany's leading historians about the balancing freedom of expression and the distortion of the historical facts. 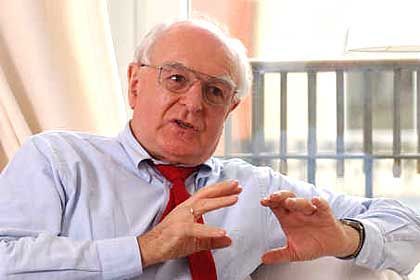 Hans-Ulrich Wehler, born in 1931, is one of Germany's most respected historians. He taught at the University of Bielefeld until his retirement in 1996.

SPIEGEL ONLINE: Professor Wehler, do you think that sentencing David Irving to three years in prison for denying the Holocaust makes political sense?

Wehler: Whether Irving has been sentenced in Austria for three years or for ten years makes no difference at all to me. I consider any kind of political or emotional pity for this man is out of place. But I think that the decisive moment actually took place years ago in London, when Irving was ruled guilty with the help of expert testimony by historians.  In the end, the Austrians are just repeating this,  two and half years after the fact.

SPIEGEL ONLINE: Do you think that in a case like Irving's it is really necessary to involve the legal system or are we finally able to deal with people like Irving purely with arguments?

Wehler: I am of the opinion that Irving is a desk-bound right-wing radical, and that in fact the only thing which really helps is seeking an open debate. One has to confront him time and again, with great patience, with the correct counter-arguments. There is, however, a fine line: if one hauls right-ring associations into the courts, then one can hardly argue that desk-bound offenders like Irving should be somehow beyond the reach of the law. Nonetheless, in principle I am of the opinion that one should just treat Irving as an exotic person on the right-wing fringe and debate against him when one gets a chance.

SPIEGEL ONLINE: Could you perhaps describe a bit how the manner of dealing with Holocaust deniers has developed since the end of the war until now?

Wehler: After the Allies had, completely rightly, prosecuted at Nüremberg and elsewhere, the Federal Republic in the 1950s was a tired state when it came to bringing National Socialism to justice. It was only in the late sixties that a young generation of lawyers and judges came to think the following: "We are the ones who have to crack down. The Allies have done their bit, now we West Germans have to act." For a long time, the Federal Republic had no legal means to deal with those who denied Auschwitz. The legal fine-tuning came only later.

SPIEGEL ONLINE: Why was this necessary?

Wehler: Of course one can always say that the dispute should be fought only via debate. But in the case of the Holocaust it is a matter of the industrially organized mass murder of six million human beings. And to brazenly deny this, in the peculiar manner of the current Iranian government, is unbearable at least in the German public sphere. For instance, after the first successes of the (neo-Nazi) NPD in the late sixties, right-wing radicals began to pose as "avengers" of a sort. So a ruling was quickly made that one could be prosecuted in Germany if one denied the mass murder of Jews in the Second World War. So it has been a gradual process which didnt get going immediately after 1949.

SPIEGEL ONLINE: So how can one reconcile the right to free expression with the prosecution of Irving? Do you consider this problematic?

Wehler: The denial of such an unimaginable murder of millions, one third of whom were children under the age of 14, cannot simply be accepted as something protected by the freedom of speech. There should indeed be a legal zone in which this kind of lie should be covered. However much I am in favor of the right to freely express one's opinion, one cannot allow the denial of the Holocaust to hide behind overly generous freedom of expression.

SPIEGEL ONLINE: Outside of Europe this practice often gets criticized. Why is that?

Wehler: Only Europeans find this acceptable, as do bordering lands like the Ukraine or Russia. That the issue is far away for those in Anatolia, Brazil or China and thus uninteresting for the majority cannot be a reason for us to forgo legal prosecution. The universal validity of this criticism or of the prosecution itself cannot be the measure of what one undertakes or ignores.

SPIEGEL ONLINE: What do you think of Irving's claim that he's since changed his opinions about the Holocaust because he has obtained evidence lately which proves the Holocaust as fact?

Wehler: I don't know whether his lawyer counselled him to make an orderly retreat. In fact Irving has held certain convictions over a long period of time, and although I dont know him personally, I really can' t imagine that a man who undoubtedly knows the evidence and who has devoted his adult life to modern German history has only now discovered that there really was mass murder. I think that's just a tactical maneuver.

The interview was conducted by Anna Reimann and translated by Anjana Shrivastava.