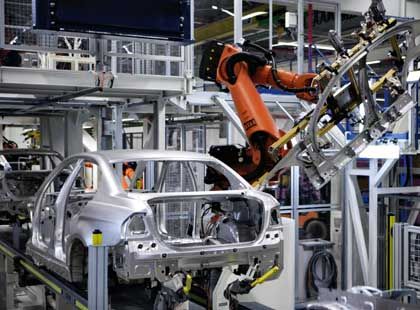 Now you see it, now you don't: Robots are cheaper than employees, and manufacturers in every industry are rapidly shifting to automation.

In Western Europe, thousands of jobs have been eliminated as companies move their production facilities abroad. In many cases, the jobs are only temporarily being relocated to the Czech Republic or Poland. But these debates conveniently avoid the real problem: jobs aren't just being outsourced to lower-wage nations -- they're being replaced by automation. During the final two installments of a series of conversations with Jeremy Rifkin, the author discusses the disappearance of mass labor and offers prescriptions for countering the phenomenon.

The End of Labor in Europe -- by Jeremy Rifkin

No one is dealing with the real employment problem in Europe. They're afraid to have the real conversation. These jobs are never coming back. What you'll hear from politicians is that they're being outsourced, we're losing our jobs to cheaper labor markets -- be it in Eastern Europe, China or wherever. So outsourcing is the problem. If you're a Christian Democrat or center-right, you'll say, If you elect us we'll create an unfettered American-style market economy so that we can be globally competitive and you'll have jobs. If you're center-left, you'll say, we'll make sure to protect your interests against unfair trade practices, so you'll have a playing field that's competitive. What I say is this: Neither will bring jobs back.

Outsourcing counts for about 5 percent or less of the jobs that are disappearing. And the jobs are disappearing all over the world -- in Europe, in Asia, in South and North America, everywhere. They're disappearing because we're seeing a great change in the nature of work and the politicians don't want to discuss it because they don't know how. The fact is that we're ending mass wage labor. This is what's going on with all the companies I've been working with.

The last great structural shift in labor occurred at the beginning of the industrial revolution. We ended slave labor and that was a great structural shift. For 10,000 years people held each other as slaves. From an economic point of view, it became cheaper to feed coal to the steam engine than to feed the mouth of a slave. The new high- tech revolutions of the 21st century end mass wage labor -- meaning the cheapest worker in the world is more expensive than the intelligent technology coming online to replace them.

A lot of politicians in Europe and America say, gee, the jobs are going to China -- if only we could get the manufacturing jobs back, we would have jobs. What they don't know is that China has eliminated 15 percent of all its factory workers in seven years. Forever. They don't exist. This is the story no one wants to talk about: the cheapest Chinese workers, and they're pretty cheap, are not as cheap as the intelligent technology replacing them. Fourteen percent of all the factory workers in the whole world have disappeared in the last seven years . At this current projected rate, even if you don't increase the intelligent technology (in other words, let's say there's no Moore's Law here) and things just keep going as they are, then you end mass factory labor within 30 years.

The old idea is, okay, this has always happened in history. We can deal with it. Everybody used to be on the farm, then it automated with machinery and they went to the factories. Then in the 1970s and 80s the factories were automating, so we went to the service industries.

Well, the intelligent technologies are penetrating just as quickly now into the service industry as they are in the factories -- be it banking, financing, wholesale or retail trade. You can go to the grocery store and as soon as you take the products off the shelf, they're automatically accounted for and you can check out without a cashier. Where are the telephone operators or librarians or bank tellers, the middle managers, the secretaries? The traditional jobs are all going.

Yet what a politician or economist will say is -- well, maybe that's true -- but it's creative destruction. We always create new ideas, new jobs and new products that we never before imagined. They would say we are going to create new types of jobs: analysts, consultants, programmers, engineers, educators and technicians, right? That was Robert Reich's idea when he was secretary of labor under Bill Clinton. The problem with that premise is that no business I work with believes that these kinds of jobs will absorb the workforce of the world. We will create all sorts of new jobs, we'll create new skills and we'll create new technologies. But these new high-tech specialists and professional jobs are not mass labor, they're boutique. You're never going to see mass workers in software companies, nanotech companies and biotech companies. They don't exist. The new workforce is a specialized professional one. 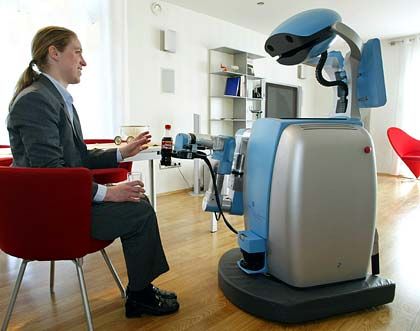 Advances in technology mean that broad swaths of the service industry -- which people once thought could buffer the loss of jobs through automation --will also soon go to the robots.

So it's not just in the factories where we are moving to pure automation, or in the service industries. It's happening in professional and conceptual categories, too, like architecture, law and accounting where you need the best and brightest talent, but you don't need the garden variety professionals. Politicians don't want to talk about it because they fear they will scare away voters. But they have to talk about it because if they don't they will engender more cynicism when the problem becomes more apparent to people.

Even if you retrained the entire workforce of Europe so that they would be qualified for these high-tech jobs, there would never be enough work in this sector to absorb mass labor. That's true all over the world. If you listen to the center left, then all you have to do is protect people against unfair competition. But that's no answer given that these jobs are disappearing forever.

For years we've known this was coming. In the 1960s, we had a debate in the United States about whether increased automation would destroy work. Norbert Wiener, who was the father of cybernetics and was responsible for the communication revolution we are now experiencing, got so spooked out at one point, that he called Walter Reuther (then the president of the United Auto Workers union) and warned that developments in communications technologies could end mass wage labor. He pleaded for a global conversation around the implications of automation to the future of society. But he was premature. John F. Kennedy was about to set up a commission, but then he was assassinated. President Lyndon B. Johnson did set up a commission, but then the war intervened and it created a lot of jobs, at least temporarily.

It took some time before automation began in earnest, so the issue died for many years. It only became a serious issue again after the publication of the "End of Work." and even now the debate isn't really happening. But the automation is here now. I have seen technology in the pipeline at the Massachusetts Institute of Technology and in other places in Europe and America, and it's breathtaking. The intelligent technologies emerging as we move towards grid computing, parallel computing and then perhaps even quantum computing are breathtaking. No high-ranking CEO believes that there are going to be hundreds of millions of people working side by side with machines in 50 or 75 years from now.

This has enormous implications for a manufacturing-rich country like Germany. But German politician aren't even having the conversation. There are strategies Europe can follow in order to preserve work in the short, middle and longterm.

Towards a shorter working week

"The End of Work," started the debate about the 35-hour work week in France, and I got a lot of flak when I was there last month By critics of the reduced workweek. After the French made the 35-hour work week law, the results were mixed. It did create some jobs, but it was unrealistic to believe that a reduction in work hours, alone, would be the only change necessary to resolve the bigger question of the end of work.

What we know from industrial history is this: when productivity rises, you have two choices: you either reduce the work week or you reduce the work force. If we still had a 70 hour work week, then very few people would be working in the world. Instead of one person working 70 hours, two people can work 35 hours. So at each stage in the industrial revolution, as you increase productivity with new technologies, you can organize labor demands for a shorter work week. If you assume that the new IT technologies, biotechnologies, and nanotechnologies and all these other technologies will be at least as productive as steam power and the internal combustion engine, then you can roughly estimate the impact this will have on the working week. If we went from A 70 hour work week down to A 40-hour work week in a period of about 100 years, then we could certainly go from 40 hours down to 20 hours in the next 50. So I think the French plan was a first attempt, despite Some flaws. It was neither a failure nor a success.

One major problem of the 35-hour work week was that it didn't have enough flexibility built into it. There should have been more incentives for people to work fewer hours. They should have made 35 hours the base -- and if you went under it, you would get even more incentives, like the government absorbing your payroll taxes. You also have to be flexible and allow companies to keep workers for more than 35 hours, but they shouldn't be given as many incentives.

But blaming the 35-hour work week for unemployment in France would be absurd because it would be tantamount to saying that all of industrial history makes no sense. In other words the shorter work week is not a radical departure, historically. Rather, It is the traditional way you deal with increased productivity.

Ultimately, we have to explore bold new approaches to addressing the problems created by the phenomenon of the disappearance of mass labor.

(This article has been adapted from conversations between Jeremy Rifkin and Spiegel Online editor Daryl Lindsey.)

Coming Next: A look at the hydrogen economy and other ideas that could save jobs in Europe.