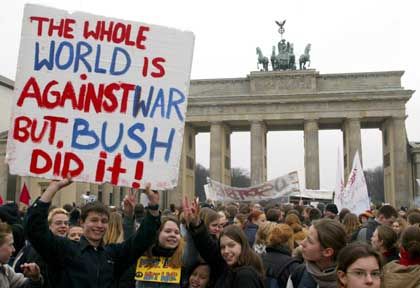 Fifty years ago, Europeans came together after 2,000 years of bloodshed to create the European Union. The model of cooperation and peace that has emerged is unprecedented in history.

Imagine it's 2030 in Europe. The last automobile manufacturing job has finally been transferred to China, the social system is collapsing because the population has shrunken to the point that it can no longer finance pensions, competition from abroad and a perpetually stagnant economy has suffocated business. Immigrants are further isolated and alienated from society than ever before, with parallel societies deeply rooted across the continent. The dream of European unity has long been forgotten.

It's not a pretty picture, but it could happen. The failure of referenda on the European Constitution in France and the Netherlands has created one of Europe's greatest post-war political crises. Europe is having an identity crisis of epic proportions. Should it preserve its small "s" socialist system or should it make the leap to American-style capitalism, a proven job-creating engine? Is Europe the land of baguette-toting French and white sausage-eating Bavarians or should it identify itself as a melting pot for immigrants like the United States, a line of thinking that would be more realistic on a continent that is already home to 15 million Muslim immigrants? These debates are currently stalling progress in a process of European unity that is desperately needed in order to tackle the problems of an increasingly globalized world. This is a pivotal moment for European history and the decisions made in the coming months could determine whether the EU becomes one of globalization's winners or one of its losers.

In a series of conversations, Jeremy Rifkin, a leading Atlanticist in the United States and author of "The European Dream: How Europe's Vision of the Future is Quietly Eclipsing the American Dream," discusses Europe's current problems and offers solutions for its future. Europe's vision, he argues, is the right one -- but the European political motor needs a major tune-up. This is the first part of a series that will posted on Spiegel Online for the next seven days.

The European Dream vs. the American Dream -- by Jeremy Rifkin

The American Dream has been the standard for a long time for everyone. America is a tough country, but it's the land of opportunity. If you get a good education, and if you work hard, you can make a success out of your life. It's an individual dream about individual opportunities and self-interest. Unfortunately, during in the last 40 years the dream has completely unraveled.

It didn't used to be that way. The American Dream was once robust and immigrants really did make it. As late as 1960, we were the most middle class and most egalitarian of all the OECD developed nations. We now rank 24th among industrial nations in income disparity -- only Russia and Mexico rank lower. That's disgraceful and most Americans would be shocked if you told them that. Barely 51 percent of Americans believe in the American Dream according to a Ford Foundation survey. One-third say they don't believe in the dream at all, which is devastating because that's the social glue, that's what binds us together, much more than Wall Street or Washington or even the US constitution.

My sense is that there's a powerful but still developing dream emerging on the other side of the Atlantic. It began with the Willy Brandt generation, after World War II. It got its legs in the 1960s with the young baby boomer generation and is now maturing with the young Europeans or "Generation E." This dream is starting to fill in. As an observer, what's interesting is that it's the mirror opposite of the American Dream. But I think it may be a better fit for the globalizing world.

The American Dream focuses on the personal accumulation of wealth and individual success whereas the European Dream focuses more on quality of life. The American Dream emphasizes growth, while the European Dream focuses equally on what Europeans call sustainable development. There is a deep attachment in Continental Europe to larger environmental issues -- and they really do walk the walk. The environment counts, biodiversity counts. The EU member states signed the biodiversity treaty and they were the big champions of the global warming treaty. They're moving to renewable energies and towards benchmarking the shift to organic, sustainable agriculture. They use energy much more efficiently and they're developing the chemical reach program to ensure chemicals are tested before they come into the environment. Thirty years ago, they were way behind the United States in protecting the environment, but now they are significantly ahead. For example, the United States uses one-third more energy than Europe even though Europe has 450 million people compared to our 280 million.

The American Dream focuses heavily on property rights and civil rights because they extend our individuality. If you have property and civil rights, you're independent and self-sufficient. Europeans put a lot more focus on what they call social rights and universal human rights. Healthcare is a right in Europe. Paid vacation is a right as is retirement income. In the US, the only real social right that is actually wedded into the fabric of our society is that of public education. And though Jimmy Carter talks about human rights, it's not something you hear much about in the American heartland.

The American Dream is very wedded to the work ethic -- we work the longest hours in the world, even longer than the Koreans and Japanese. It's part of our religiosity: The Christian work ethic that idle hands are the devil's workshop. So when we hear the word idle, we think of it as an almost immoral way of life. It goes back to our Protestant Reformation roots that you have to always be productive and increase your calling and improve yourself. But when a European hears the word 'idle,' they hear something different: It's time to go to the café, have a glass of wine and smell the roses. Across Europe, people work to live, but Americans live to work.

The American Dream also focuses heavily on religiosity -- we're the most pious of any of the industrial countries. A majority of Americans have a personal relationship with God that's heartfelt. Ninety percent own a bible, half believe in a literal interpretation of biblical doctrine, half believe there will be a final battle of Armageddon between Christ and the anti-Christ and 25 percent think we're in the end times. In Europe there may be personal spiritual trips, but each generation has become less and less religious in their orientation.

The American Dream focuses on patriotism. We're the most patriotic of 50 countries surveyed and our kids will die for their country. When Europeans hear the word patriotism, it makes them somewhat nervous, except when they are at soccer games. But when you talk about it geopolitically, it conjures up the specter of the 1930s -- and evokes memories of an older barbaric geopolitics. That doesn't mean they don't love their countries. A Bavarian will say, "I'm a Bavarian and a German," but "I'm also a European," especially the students who have participated in the Erasmus European university exchange programs. Their identities are more complicated than ours.

Finally, whereas the European Union project is about building peace, the American Dream is heavily engaged with a very strong military because we think evil is more than a metaphor and that you must have a just but tough military hand.

The European Union is often confusing for people because it was built on sharing power and there is absolutely no precedent for it. People came together in 1945 and said we're not going to kill each other anymore. We've been killing each other for 2,000 years, the Europeans say, and we've had two world wars and a Holocaust, we've been diminished to rubble and we're going to put down the swords and try to figure out a new way for people to govern themselves based on cooperation and trust. What's so extraordinary is that that has never happened before in history. Until now, every government, nation and empire has been based on coercion and violence and seizing territories and waging revolutions. Even the modern democracies have largely been forged in bloodshed.

Taken in that historical context, the EU is totally counterintuitive. But somehow, three generations, especially the last two, have built peace. They have taken a continent that was the most hate-ridden in the world and they've turned it into a place where people respect and even celebrate each other's cultures. And most Europeans -- baby boomers and Generation E -- believe in inclusivity and that no one should be totally abandoned to the free market. There should be some sense of collective responsibility for the less fortunate, for fostering multicultural diversity and the idea that each culture is a gift to be shared in Europe.

Needless to say, Europe isn't totally living up to this dream, and we could spend hours discussing the hypocrisy, the biases, the prejudices, the failures to deal with immigration, the power struggles. Europe is a mess.

(This text has been adapted from conversations between Jeremy Rifkin and Spiegel Online editor Daryl Lindsey.)

Part Two: "The Consitutional Crisis," will be posted tomorrow.