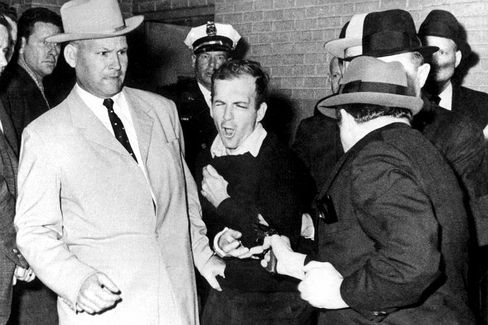 A documentary to air later this week on German public television provides what its producers believe is the strongest evidence yet linking the regime of Fidel Castro to the assassination of John F. Kennedy. It also provides a motive -- sources in the film claim that Cuban intelligence agents contracted Lee Harvey Oswald, a willing drifter, to kill the president in retaliation for several foiled assassination attempts plotted by JFK's brother, then-attorney general Robert Kennedy, against Castro.

"For me, the essence of the assassination has been explained," German filmmaker Wilfried Huismann said after a preview in Berlin on Wednesday of his new documentary on Kennedy's murder, "Rendezvous With Death." His movie may not be the alpha and the omega of JFK scholarship, he says, but at least he can grasp the "political context" of Kennedy's sudden death.

Award-winning filmmaker Huismann relies on newly declassified documents from the Mexican government as well as interviews with aging, colorful insiders from the Cuban intelligence service, G2, the FBI and a veteran American statesman.

Oscar Marino, a former Cuban secret agent who has broken with Castro, tells the camera that Havana wanted Kennedy dead because "he was an enemy of the Cuban Revolution" -- a sworn and public enemy who had even sent a team of CIA-contracted militants to overthrow Castro in 1961. (That mission failed at the Bay of Pigs.) "Why did we take Oswald?" he says. "There wasn't anyone else. You take what you can get ... Oswald volunteered to kill Kennedy."

The film will air on the German public TV channel ARD on Friday and Huismann says there are currently no plans to distribute it in the United States. But if the sources are reliable, it would be a significant new corroboration of a story that has quietly made the circuit of JFK conspiracy theories ever since his assassination in 1963.

General Alexander Haig, for example, thinks Kennedy's successor, President Lyndon B. Johnson, "was convinced Castro killed Kennedy, and he took it to his grave." Haig served as a military adviser to Johnson and later as President Reagan's Secretary of State. He tells Huismann in the film about memos from 1963 that suggested Johnson's fear of letting the Castro-assassination story get out to the American public. Johnson's attitude, said Haig, was that "we cannot allow the American people to believe that Castro ... had killed Kennedy," because "there would be a right-wing uprising in America which would keep the Democratic Party out of power for two generations."

He also may have averted World War III. Kennedy had faced down Soviet premier Nikita Krushchev over nuclear missiles in Cuba a year before, and if it turned out that Havana was behind the assassination of an American president, argued a former FBI agent named Laurence Keenan, who appears in the film and also attended the Berlin preview, most Republicans in America would have called for a "dangerous" invasion of Cuba during a delicate phase of the Cold War. "This was on their agenda," Keenan said, "ever since Castro came out of the mountains in 1959. He was a thorn in their side."

Keenan, 81, is another source for Huismann. He was an FBI agent sent personally by J. Edgar Hoover to Mexico City in the days after Kennedy's assassination to investigate claims that Oswald had some connection with the Cuban embassy there. After three and a half days, he was recalled. "I was a messenger," he says in the film -- intended to deliver the news to elements of the Cuban government that Washington wouldn't push the case. "It was clear I was being used. I felt ashamed," Keenan says in the film. "We missed a historical chance" to clear up the assassination.

Huismann also talks to a retired surgeon in Madrid named Rolando Cubela, who became a rival of Castro's after helping him lead the 1959 revolution. In the documentary, Cubela claims the CIA contracted him to kill Castro with a poisonous fountain pen. This mission -- meant to occur on Nov. 22, 1963, the very day Kennedy died -- failed, and Castro is still in charge of Cuba almost 43 years later. "He bested us," says retired CIA officer Sam Helpern at the end of Huismann's film. "He came out on top. And we lost."

Huismann is a German who has lived in Chile and made previous films about both Castro and Salvador Allende. He co-wrote "Rendezvous With Death" with Gus Russo, a journalist and Kennedy investigator who has studied the assassination -- and Oswald's links to Cuba -- for almost three decades. Russo wrote a 1993 documentary for American TV called "Who Was Lee Harvey Oswald?," and he published a book on Castro and Kennedy in 1998 called Live By the Sword. He says he helped Huismann find sources, but "the G2 figures were all Willi's ... It was due to his great talent and skill that they talked."

Did the KGB recommend Oswald?

Another new detail in the Russo-Huismann story is that Oswald came to Cuba's attention with Russian help. Oswald had visited Minsk, Russia in 1962, and Huismann argues that KGB agents recommended him to Havana in a telegram, found later in Soviet intelligence files. Oswald traveled to Mexico City just before the assassination, and, according to the documentary, it was there that the drifter received his orders and money from the Cubans.

Members of Castro's intelligence agency, of course, deny this story as a fairy tale. General Fabian Escalante, a longtime head of Cuban state security and author of books on rival theories about the Kennedy assassination, swats back every accusation with an aggressive smile. "There are smart people who doubt the Americans really landed on the moon ... What is true," he says, "and what's a lie?"