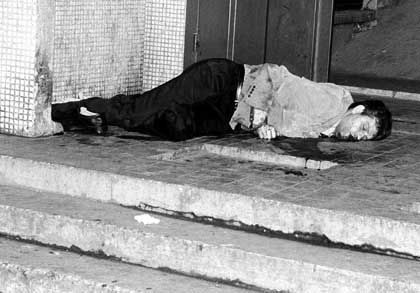 The body of Alexei Sidorov, editor of the Togliatti Review, who died after being knifed several times, lays in a parking lot hear his home in the Volga River region city of Togliatti on Oct. 9, 2003.

Eduard Markevich -- Editor of the newspaper Novyy Reft, published in Russia's Sverdlosk region and noted for its critical stance towards the government

Natalya Skryl -- Journalist with a specialization in economics, from the city of Rostov by the Don River; investigated allegations of corruption against major corporations

Valery Ivanov -- Editor-in-chief of the Togliatti Review and director of the independent television station Lada TV; reported on the mafia, corruption and white collar crime

Paul Khlebnikov -- Editor-in-chief of the Russian edition of the business journal Forbes; reported critically on Russian oligarchs and their connections to the Kremlin

Anna Politkovskaya -- Editor of the newspaper Novaya Gazeta; reported on the war in Chechnya; considered one of President Putin's critics