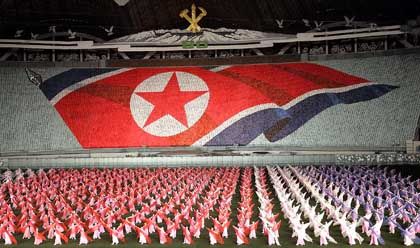 Workers and students celebrate both Kim Jong Il and his late father in the Arirang Festival at Pyongyang's May Day Stadium.

In an auditorium on the Taedong River in Pyongyang, two special blooms appear in an ocean of flowers: the violet Kimilsungia and the red Kimjongilia. Cross-bred from orchids and begonias, the special flowers are named after the "Dear Leaders" of North Korea -- Kim Il Sung, President for Eternity, who died in 1994, and his son, Kim Jong Il.

Thousands of people push past the flowerpots and have their photographs taken for 600 won (about four dollars) in front of giant paintings of the two Kims. The place is packed with soldiers, too -- women in short uniform-dresses and barrettes, men with big plate hats and ceremonial medals on their chests. But other men wear less-dashing uniforms and look lean and small as kids. Their low voices don't correspond with the size of their bodies. They are survivors of the famine in the mid-1990s that devastated North Korea.

During the "Arduous March," as that time is now euphemistically called in Pyongyang propaganda, an estimated 2.5 million North Koreans died. A whole generation was marked for life: these young soldiers in brown clothes and thin cloth shoes have been growth-stunted for lack of food.

The man primarily responsible allows himself to be celebrated as a heroic "victor of the Korean Revolution." The occasion is the 60th anniversary of the Korean Workers' Party. General Secretary Kim Jong Il, 63, waves from the balcony of the Grand People's Study House as military and militia units march by in lockstep, led by two medal-draped marshals in antique Mercedes convertibles. 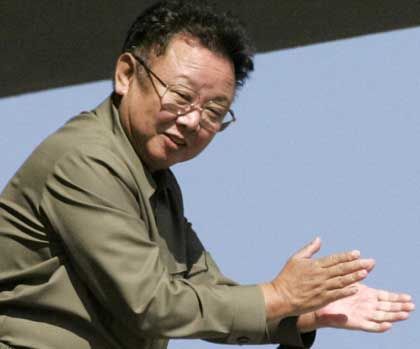 Kim Jong Il likes festivals in his honor as much as anyone.

Kim loves mass spectacles -- and not just lavish parades. Almost every evening since mid-August, he's appeared at the May Day Stadium on a TV program called "Arirang," named after a Korean folk song, to be worshipped along with his father (who nowadays is seen by North Koreans as a god-like figure). Minions dance and twirl on the stadium floor in a clockwork-precise blend of gymnastics and artistry.

Revolutionary images flash in the bleachers as hundreds of young people lift colored panels with equally tight precision. Titles of the program include "The Glory of Resistance" or "Victory Against American Imperialists!" A green-glittering star floats above the crowd -- a symbol of the old Kim rising to heaven. A flame blazes to life, dancers form a North Korean flag with colored shawls, and children sing: "How happy we are, that the Dear Leader watches over us!"

For the Party's anniversary this metropolis of 3 million people has presented its best side to the world, with gaily painted facades and colorful downtown lampposts. Little street stands offer ice cream, fruit and lemonade. But most North Koreans remain alienated from any sort of normal everyday life: Even the relatively privileged citizens of Pyongyang seem exhausted and careworn.

About 6.5 million people across the nation -- mainly children, the ill, and the elderly -- still rely on food donations from abroad for their sustenance, according to the United Nations' World Food Program. At the same time, North Korean officials say they want only long-term development aid and no more sacks of rice or beans after 2006. They hustle international workers out of the country -- according to official reasoning -- because farmers can now harvest more than before. But the truth is that Kim Jong Il also doesn't want to attend the next international talks over his nuclear program as a weakened, needy negotiator.

Many of the 130 or so foreign workers in Pyongyang suspect another motive. "We bring in too much information, an alternative lifestyle," says one. "For a some North Koreans we're the only connection to the outside world."

Aid outfits are now bargaining hectically with government officials to win permission to stay. The apparatchiks want concessions: fewer inspections, fewer foreigners in the capital. "We'll probably close down our 19 foodstuffs factories," says Richard Ragan, who has resigned from the WFP and is currently the only American in Pyongyang. The WFP factories produce mainly nutrient-rich noodles and baked goods for children and pregnant mothers.

There are other signs that Kim wants to return to the strict planned economy that he earlier liberalized in order to address the food shortage. As of this month, rice, corn, and wheat cannot be sold in private markets. These basic foodstuffs will be handed out using ration cards -- just as they were before the famine struck.

Just after the anniversary celebrations, columns of trucks were seen rolling through Pyongyang with logos for the color-TV brand "Arirang." They carried gifts from the Beloved Leader for the "core of the powerful North Korean nation" -- the army.

Soldiers unloaded the cartons and lugged their contents along an empty freeway into their villages toward the south. The TVs were strapped to their backs.