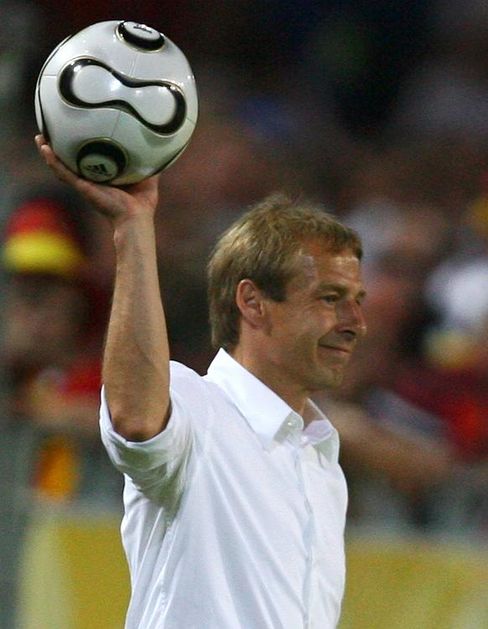 Germany's team might not have made it into the final, but the country is clearly a better place for hosting the 2006 World Cup. Long considered a dour and gray nation of moaners, Germany has shown the world -- and itself -- that maybe it's not so bad after all.

The soccer tournament has unleashed a torrent of feel-good vibes from Hamburg to Munich that has stunned the locals probably even more than all the foreign visitors from around the globe. Germans -- long shy about expressing positive attitudes toward their country in light of their difficult history -- have experienced three weeks of unabashed fun and pride decked out in the national colors black, red and gold.

The Germans are positive. The Germans are friendly. The Germans have hosted an unforgettable World Cup. How can this be? For years, commentators both at home and abroad have derided the Germans for their pessimism and often glum or crabby manner. A sudden transformation brought on by the sunny, California-style optimism of German national soccer team coach Jürgen Klinsmann?

To be sure, Germans have reveled in the wave of enthusiasm that has accompanied the unexpectedly strong showing of Klinsmann's young and confident squad. But now that the team has been tossed out by Italy, will the wave break and roll back leaving Teutons with a World Cup-sized hangover?

Not right away at least. Two ladies working in a Berlin supermarket on Wednesday were so extremely friendly and nice that one gets the impression Germans are as happy to have shed their old image as they are about the World Cup.

Besides, much of what has seemed so surprising over the last three weeks is less some dramatic transformation than simply a new perspective on things. Germany was always full of friendly and optimistic people like Klinsmann -- it's just that they were often drowned out by all the complainers and pessimists. The World Cup hasn't changed the foundations of the country, but it has changed the balance within it.

Not such a bad place after all

Just as Germany was never as bad a place as many foreigners thought, it was certainly much nicer than many Germans were willing to admit. Yes, there are problems, serious ones. The economy might be doing okay at the moment, but far too many people remain jobless. And Chancellor Angela Merkel's so-called grand coalition appears more willing to simply milk taxpayers than undertake real reforms that would overhaul the country's bloated welfare system or creaky healthcare.

Still, Germany remains a very comfortable place to live. And much of the new attitude unleashed during the World Cup simply seems to be people realizing this.

And Germans aren't the only ones. The black, red and gold flag fest has been a boon for the country's integration of its citizens with immigrant backgrounds. Many Turks and Arabs flew the German colors at their shops or on their cars. A small gesture perhaps, but an important one to both those Germans concerned about integration and those immigrants acknowledging that this is their home too.

This outpouring of good-natured patriotism is only logical: if the Germans are more willing to express their affection for the good aspects of their own country, then so too will others.

Of course, there will be challenges both private and public that will make it difficult for some Germans to stick to their newfound positive ethos. But the naysayers no longer have the upper hand here. Many optimists will not cede the country back to the moaners so easily. And that, in many respects, is a greater gift from Klinsmann and his team than winning the World Cup ever could be.