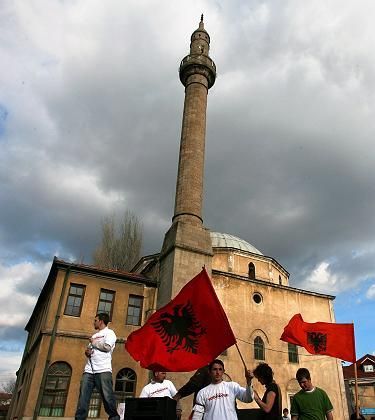 Albanians demonstrating for Kosovo independence in Pristina in early March.

Common ground on Kosovo, it seems, is still a long way off. In Vienna on Saturday, a year of fruitless talks between Serbs and Kosovo Albanians failed to reach a negotiated solution for the province, leading United Nations Special Envoy and Finnish President Martti Ahtisaari to admit defeat. He said he would now send his plan to the UN Security Council for review.

But even if the council imposes a solution, the future of the province is far from rosy. That, at least is the conclusion reached by a Berlin think-tank this month, saying the international community is largely to blame for ignoring the realities in Kosovo.

The planned "construction of a multi-ethnic society" has "failed" and does not exist "outside the bureaucratic statements of the international community," says the report, released by the Institute for European Politics (IEP) in Berlin.

Indeed, eight years after the end of the Kosovo War -- when NATO air strikes on Belgrade ended the Serbian crackdown on the Albanian insurgency -- the two sides still want as little to do with each other as possible. While the ethnic Albanian majority insists on nothing less than full independence, many Serbs do not want to lose Kosovo, which they see as their historic homeland.

Serbian President Boris Tadic said he found the idea of parting with the province "unbearable" and Serbia's Prime Minister Vojislav Kostunica said the plan would encourage other regions around the world to break away. Although Ahtisaari's blueprint stops short of the word independence, it sets out a framework for a Kosovo state, under a foreign overseer, with protection for the 100,000 remaining Serbs. UN veto-power Russia may provide a stumbling block, as it has traditionally been a Serb ally, but so far it has avoided threatening to use its veto.

The failure of the talks comes exactly one year after former Serbian autocrat Slobodan Milosvic was found dead in his cell in The Hague where he was on trial for war crimes. A number of officials from the Socialist Party, which Milosevic used to lead, gathered to mark the anniversary.

But according to the Berlin report, if Western governments are hoping to resolve this final major dispute left from the bloody break-up of Yugoslavia, they may be disappointed. The analysis by the IEP, which specializes in studying European integration, is a scathing critique of the security situation and the future prospects for development in Kosovo.

The study, commissioned by the German army, says the European Union's security strategy for a future mission in Kosovo is "neither analytically nor conceptually sustainable." The "false belief" in the blessing of independence is pushing "hopes for a leap in prosperity to unrealistic levels," it writes. Instead, any setback threatens to result in "serious unrest if not revolutionary-like upheavals."

The 124-page report blames the bleak prospects for the province's future on the UN administration, the NATO-led KFOR mission and the Europeans' "ostrich" policy. The study outlines mismanagement, corruption, organizational chaos and "organized crime gangs," which have infiltrated significant parts of the KFOR staff. The role of the United States is also deemed counterproductive: The IEP accuses Washington of being involved in helping criminals to flee, "sometimes openly" hindering European investigations into war crimes and training former KLA fighters -- an "obvious" breach of the UN resolution.

The think tank also berates Western governments for Kosovo policies that are "hesitant, inconsistent and inhomogeneous when it comes to significant issues." Instead of unsparingly taking stock of the situation, pressure to succeed from the highest political levels has created a "culture of systematically suppressing critical reports."

Demands in Germany to bring their troops home from Kosovo soon are also rejected by the report's authors. Such a move would go against the "obvious German interest in a sustainable stabilization of Kosovo."