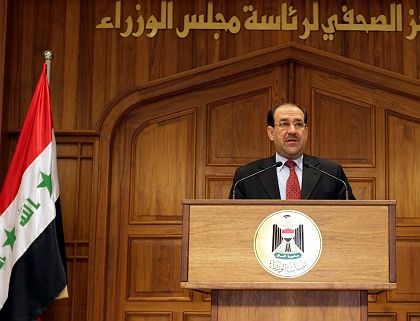 Iraq#s Prime Minister Nuri al-Maliki delivers a speech in Baghdad on Sunday. He has been lashing out at his critics.

Prime Minister Nuri Kamal al-Maliki on Sunday extended his tongue-lashing of foreign politicians who have questioned his government, saying that Senators Hillary Rodham Clinton and Carl Levin needed to start making sense again after the senators, both Democrats, called for his ouster.

Mr. Maliki, who previously reacted with anger to President Bushs criticism of the Iraqi governments lack of political progress, also lashed out at the French foreign minister, Bernard Kouchner, who called for Mr. Maliki to be replaced in an interview that appeared on the Newsweek Web site on Sunday.

But Mr. Maliki appeared to reach a new level of stridency with his reply to Senator Clinton, of New York, and Senator Levin, of Michigan. In remarks in a news briefing that referred to the senators by name, Mr. Maliki said they had spoken as if Iraq is one of their cities.

Iraq is a sovereign country, and we will not allow anyone to talk about it as if it belongs to this country or that, Mr. Maliki said. He added a phrase that could be translated as indicating that the senators ought to make sense again or should return to a logical path.

Later in the day, Mr. Maliki appeared to have calmed down as he went through a series of meetings and participated in a joint statement of broad political unity by two major Kurdish parties, two Shiite parties, including his Dawa Party, and a bloc led by Vice President Tariq al-Hashemi, a Sunni.

The White House, eager for signs of progress, welcomed the agreement. A spokeswoman, Emily A. Lawrimore, said the leaders decision was an important symbol of their commitment to work together for the benefit of all Iraqis.

In advance of a report on progress in Iraq by the United States ambassador, Ryan C. Crocker, and the American commander in Iraq, Gen. David H. Petraeus, the statement appeared tailored to show that steps toward political unity had been taken.

The report by Mr. Crocker and General Petraeus is widely expected to point to some advances on security and the economy, partly as a result of an American troop increase. But the fractious government has made little progress in crucial areas like laws regulating the development of Iraqs oil resources and governing the sharing of oil revenues.

But Deputy Prime Minister Barham Salih, a Kurd, who was at the multiparty talks, said that he thought the participants had negotiated the statement in good faith.

I hope that this agreement offers us an opportunity to move beyond the political crisis that has afflicted the country, Mr. Salih said. I would consider this an important step forward, but we have to admit that we have more work to do.

Mr. Crocker was at the meeting of officials pushing along an agreement, Mr. Salih said.

In his earlier news briefing, Mr. Maliki also gave very qualified support to another initiative he has been pressed to accept: bringing former members of the Baath Party of Saddam Hussein back into the government.

The doors are open for all the politicians who dont call for violence and the use of weapons against the government, Mr. Maliki said.

Still, despite the promising signs on Sunday, Iraqs political process remains all but completely stalled. And Mr. Malikis government has been gravely weakened by major defections in the past few weeks. In the most recent, the secular political alliance Iraqiya, led by former Prime Minister Ayad Allawi, withdrew from the government on Friday.

In an interview on Sunday on CNNs Late Edition, Mr. Allawi said his alliance had lost our faith in the capability of the current government of salvaging the country and moving forward.