There are very few people out there who are as occupied with COVID-19 as Hans Bösmüller in the southern German city of Tübingen - both professionally and in private life. He was one of the first people in the country to contract the disease. Cheesecake suddenly tasted like soap, as did coffee, and he developed an aching neck. He also suffered from both a cough and a fever. Then, the symptoms disappeared. His immune system was successfully able to fight off the novel coronavirus.

On the professional front, Bösmüller's involvement with COVID-19 comes in the form of performing autopsies on people who have died from the disease. "I am extremely interested in the illness because I experienced it myself. And I am immune to the coronavirus, which is a nice side-effect," says Bösmüller, 60, who works at the University of Tübingen's Institute of Pathology and Neuropathology. Thus far, he has dissected the bodies of five people who died from the disease.

Both the Federal Association of German Pathologists and the German Society for Pathology are currently appealing to doctors to examine the bodies of as many COVID-19 victims as possible. There is an "extreme public interest" in each autopsy, says Karl-Friedrich Bürrig, who leads the Institute for Pathology in Hildesheim. He and his team hope to collect and analyze the findings of hundreds, if not thousands, of such procedures in the new "German Register of COVID-19 Autopsies."

The pathologists hope that four weeks from now, they will have found initial answers to some of the most important questions: Why do so many infected people experience no symptoms? Why do others fall critically ill? What does the timeline of the illness look like? Aside from the lungs, what other organs are affected? What are the best therapies and preventative measures?

Pathologists in Switzerland realized early on how important autopsies are in the effort to unravel the mysteries of the disease. In and around the city of Basel, they have performed more than 20 autopsies on the bodies of people who succumbed to COVID-19. In Germany, by contrast, the Robert Koch Institute (RKI), Germany's primary public health institute, initially issued a warning against such procedures, cautioning on March 24 that the bodies could be contagious.

Yet coroners and pathologists frequently work with potentially infectious corpses in their day-to-day work and have been trained appropriately. The RKI rescinded its recommendation following a letter of protest written by German pathology associations.

Klaus Püschel was among those who never took the RKI recommendation seriously in the first place. For most of the last 30 years, he has been head of the Department of Legal Medicine at the University Medical Center Hamburg-Eppendorf (UKE). Püschel was already performing autopsies on patients infected with the HIV virus back before much was known about AIDS.

Püschel's office is located above the basement where the dissecting rooms are located. His lab coat is hanging next to the door, a skull is sitting on a shelf and the floor is covered with cardboard boxes, preparations and hundreds of file folders. The 68-year-old plucks a bag containing a banana, crispbread and yogurt from the middle of the chaos: his lunch.

"The dead teach us lessons for life," Püschel says. It was "totally obvious" to him from the very beginning that it was necessary to perform autopsies on the bodies of people who had died from COVID-19. The authorities in Hamburg agreed, and the practice in the city-state has been that of examining the bodies of all those suspected of having succumbed to the novel coronavirus. Püschel and his 14 team members have opened up around 100 bodies so far.

When they were still alive, every single one of these people carried around a huge number of viruses inside them, as do we all. There are up to a billion viruses in our intestines alone – per gram of content. A lot of viruses are also found in our respiratory tracts as well. A study of 26 households in Utah found that each year, adults experience an average of six viral respiratory tract infections. Many of them are completely free of perceptible symptoms.

Far from being killers, these viruses are helpful pests that train our immune systems. Now, the novel coronavirus has been added to the mix. It presents a challenge to the immune system, but it usually isn't deadly. Many people – up to 80 percent, according to the British Medical Journal – experience no symptoms at all. Chance findings from Hamburg have now revealed that many people carry the virus unknowingly. People who experience violent deaths or commit suicide are routinely tested. "There have been a number of instances in which people died in the home environment without anyone ever knowing that they were coronavirus-positive," Püschel says.

Like others, Püschel believes that the body's natural defenses are largely responsible in cases where no symptoms were experienced. "Our immune system is the best drug," he says.

That was also the case with the Tübingen pathologist Bösmüller. Because he lives a healthy lifestyle and gets plenty of exercise, his immune system had no real trouble defeating the virus. Luckily, he remained in an isolation room at the clinic until he recovered so that he didn't end up infecting anyone else.

Those suffering from lifestyle diseases, by contrast, are much more vulnerable to the virus, according to data from the Basel region. Pathologists there have performed autopsies on 21 COVID-19 victims with an average age of 76 – with the range stretching from 53 to 96.

None of them were healthy at the time they became infected with the virus. "All of the cases had pre-existing conditions and most of them had several," says Alexandar Tzankov, a pathologist from the University of Basel. Among the conditions discovered by the doctor were hypertension, severe atherosclerosis, enlarged heart, obesity and diabetes. "They all had in common that they suffered from severe malfunction of their blood vessels," Tzankov says.

Thus far unpublished findings from Hamburg reveal a similar pattern, the university clinic told DER SPIEGEL. By Wednesday afternoon of this week, Püschel and his team had performed autopsies on 95 COVID-19 victims – 55 men and 40 women with an average age of 80.2 and an age range of 51 to 99, according to the clinic. The average age for the men was 79 and 81.8 for the women.

The findings offer clear evidence that those suffering from multimorbidity are at acute risk from the virus. "Essentially, COVID-19 isn't a problem to children or the normal, healthy population," says Püschel. Furthermore, each individual's physical condition is a more important factor than age, he says. "Age by itself isn't an illness. Older people are more likely to suffer from illnesses, but the extent of pre-existing conditions is relevant," Püschel says.

"We have seen that intensive care is more difficult for the obese," he says, "and when it comes to chronic pulmonary disease, smokers tend to be more affected."

He says that there are a number of people among the deceased who were between the ages of 50 and 60. "They weren't well-conditioned athletes, but people who were severely overweight," he says, adding that they were also suffering from arteriosclerosis, a common condition among the obese.

The long list of pre-existing conditions raises the question as to whether COVID-19 is the cause of death for many victims. "I can't say, of course, when such a person would have died otherwise," Püschel says, "whether in three weeks, three months or three years. I can only say that there was a serious pre-existing condition and life expectancy was limited."

Getting Used to COVID-19

It is a problem faced by large sections of the population. "The risk profile shared by those likely to become extremely ill or die from COVID-19 is one found in at least a quarter of the central European population," says Tzankov, the pathologist from Basel. "That number rises to around half in the higher age range, and even more than half the population in the over-85 cohort." Compared with healthy people of the same age, people with pre-existing conditions – even assuming adequate medication and self-discipline – face a slightly diminished life expectancy, Tzankov says. COVID-19 magnifies that effect.

But how can we protect the many people who are at higher risk of the disease? Do they all have to isolate themselves until a vaccine can be found?

Püschel believes that the schools should be re-opened and people should be allowed to go back to work. "I am an older man myself and personally, I reject measures that prevent me from in-person socializing. I would like to play with my grandchildren."

The rules imposed in Germany to limit social contacts have managed to keep the coronavirus death toll relatively low. "I believe that COVID-19 won't be evident in the annual statistics," Püschel says, and predicts that "the total number of deaths will be concealed by normal annual variations." Just as we have become accustomed to the seasonal flu, he believes we'll also have to get used to COVID-19.

Still, even as Püschel believes the reaction to the virus has been overwrought, he can't escape it. A door next to his office is labelled "Corona Headquarters," and younger Ph.D. candidates are seeking to determine how long the virus survives in dead bodies or how widespread it is among Hamburg's homeless population. Furthermore, Püschel receives requests from scientists every day for lung, heart, muscle and brain tissue. In addition to the lungs, the virus appears to also attack other organs. Researchers are trying to determine whether the pathogen invades these organs on its own or whether the damage is caused by an immune system overreaction.

Püschel intends to log his cases in the new register that has been set up by German pathologists. Colleagues at other university clinics had performed only around 30 autopsies by mid-April, but they now want to boost that number and present their own data.

Researchers in Hamburg would welcome such an initiative. "Corona caught me unprepared," Püschel says. He looks around at the mess in his office and says he plans to clean up soon. He is set to retire in late September. 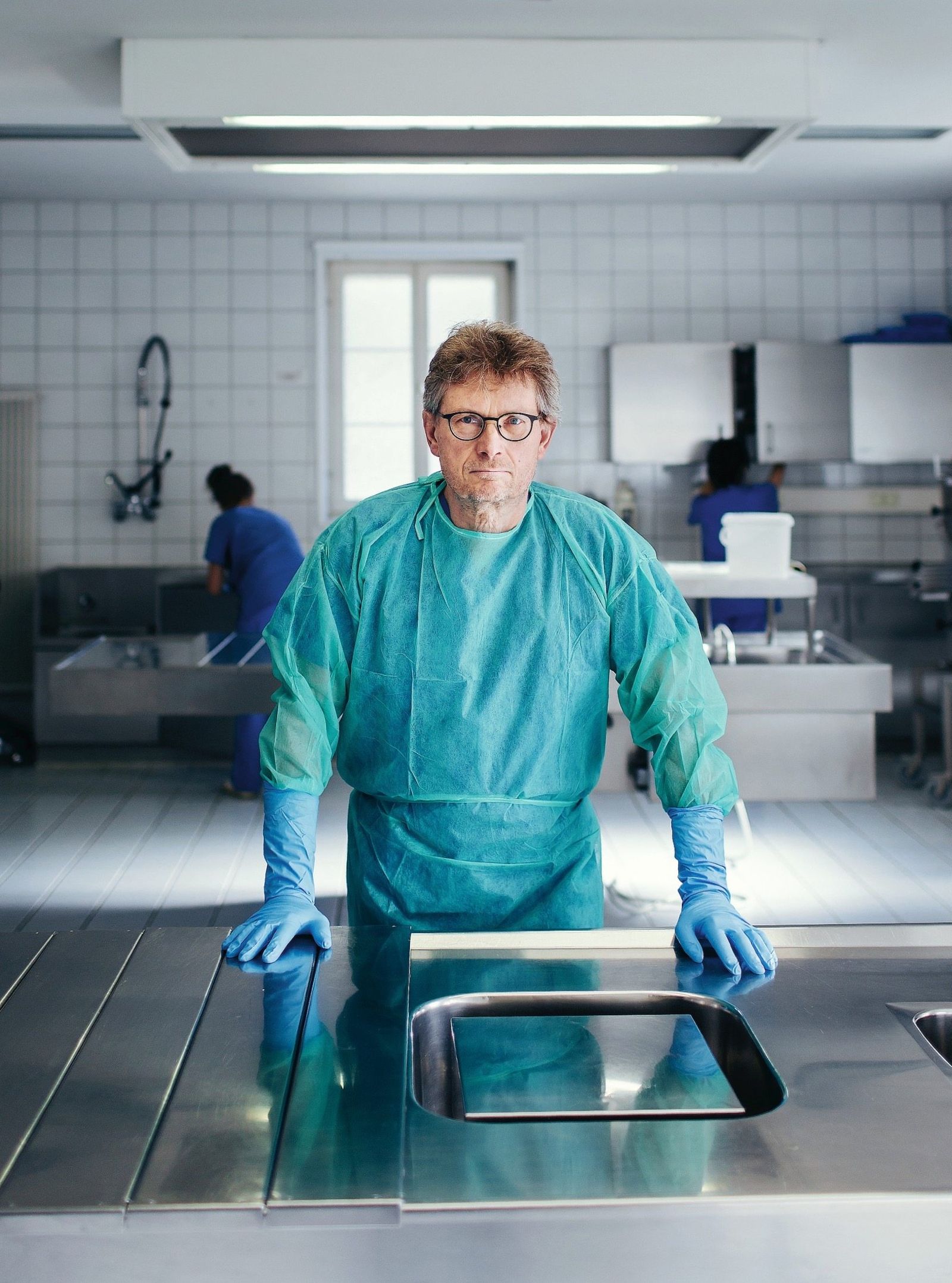 Pathologist Hans Bösmüller: "I am extremely interested in the illness because I experienced it myself."