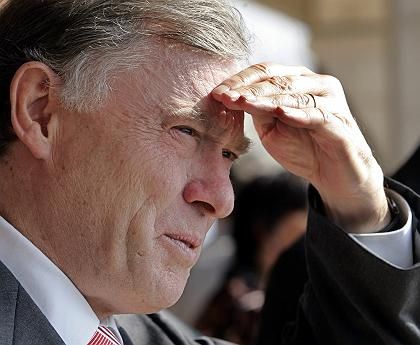 German President Horst Koehler has a difficult decision to make.

A few weeks ago, if you had asked John Doe German what exactly the president of Germany does, the answer likely would have been a disinterested shrug of the shoulders. Indeed, if you're ever at Oktoberfest in need of some sausage money, memorize a few names of past German presidents and bet some beer-bellied Bavarian that you can name more presidents than he can. If you get beyond Richard von Weizsaecker and Roman Herzog, you'd be almost guaranteed to win.

Yet now, with Chancellor Gerhard Schroeder having cleared the first hurdle on the path to early German elections tentatively scheduled for this autumn -- by intentionally losing the confidence vote in parliament on Friday -- the German president, equipped with the power to dissolve parliament in just such a situation, is the man of the hour. It's one of the few powers the German president has. He is, after all, merely the ceremonial head of state as compared with the chancellor's political powers. But now, Chancellor Schroeder has requested the dissolution of parliament. All eyes are on German President Horst Koehler. And the clock is ticking; 21 days are given to him by the German constitution to determine if Schroeder's confidence vote on Friday was legit or whether it was a particularly farcical bit of political theater.

And the game of influence peddling has begun. Over the weekend, Edmund Stoiber, the influential governor of Bavaria and chancellor candidate for the conservatives in the 2002 elections, said that, were Koehler not to dissolve parliament, "it would be a catastrophe for all of us." Politically, he said, "it would be really bad if new elections couldn't be held due to legalistic reasons." Clearly, the experienced politician had a look at the opinion polls before he weighed in with his two bits. Sixty-five percent of Germans feel that new elections are "urgently necessary," versus a mere 31 percent who think otherwise. 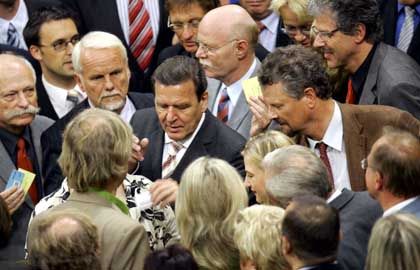 The German parliament on Friday held an engineered vote of no confidence in Chancellor Gerhard Schroeder.

Others, however, aren't convinced. A politically riveting Friday -- which included a masterful speech by Schroeder, a feisty defense of the government delivered by Foreign Minister Joschka Fischer of the junior coalition party, the Greens, and an error-filled flop by opposition candidate Angela Merkel -- was made even more consequential by a single, renegade Green parliamentarian. Back bencher Werner Schulz, speaking before the packed plenary hall, railed, "what is happening is a staged, absurd event." If Koehler dissolves parliament, Schulz has promised to challenge the decision before Germany's Federal Constitution Court.

Schulz's threat is being taken so seriously, in fact, that Koehler has already spoken to the politician about his objections.

But Koehler is, constitutionally at least, alone making his decision. Indeed, the issue cannot be taken before the country's highest court before Koehler himself has ruled. For Koehler, it's an unenviable position. While the office of president is supposed to be elevated from the day-to-day shovelling of political muck, he is widely seen as a man of Angela Merkel's opposition Christian Democrats (CDU). His election by parliament in May 2004 was pushed through by the opposition against the SPD candidate. Should he dissolve parliament as Schroeder has requested, he risks being accused of going along with a constitutionally dubious vote of confidence in order to call early elections which the CDU are almost sure to win. If he doesn't, many will say he is only not calling new elections because he doesn't want to be accused of playing partisan politics.

Nevertheless, the possibility of Koehler refusing to bend to the will of Schroeder and parliament is very real. After all, there are some very high constitutional hurdles preventing the chancellor and the president from dissolving the German parliament, the Bundestag, at will. During the 14 years of the Weimar Republic, before Hitler rose to power, the country was led by 12 different chancellors and a total of 20 cabinets. The fact that it was relatively easy to dissolve parliament played a large role in the rise of the Nazis.

So what is Plan B if Koehler elects not to dissolve parliament? After spending so much of his political capital to make new elections a possibility, it is unlikely that a paralyzed Schroeder would remain in the Chancellery until his original mandate expired in the autumn of 2006. Schroeder could, however, make a clean break with his coalition partner by chucking out all his Green ministers, including Foreign Minister Joschka Fischer, thus making a subsequent confidence vote loss less theatrical than the one on Friday. That vote saw 148 parliamentarians from Schroeder's Social Democrats, who had just the day before helped the chancellor pass a packet of 40 new laws, abstain in order to lose the confidence vote and clear the way for new elections. But jettisoning his so-called "vice chancellor," Fischer, is a virtual political impossibility for Schroeder, since it would require that he distance himself from principals and political companions he has had for years.

But the other option -- that of resigning -- is equally unpalatable. Schroeder has long said he would do no such thing. Still, it would be difficult to withstand the cacophony of voices calling for his head if his new elections strategy falls on its face. And were he to resign, it would set a process in motion over which Schroeder would have no control whatsoever. The parliament would then be responsible for electing a new, interim chancellor.

The opposition CDU has already indicated what its strategy in such a case would be. Party leaders would attempt to reach a gentlemen's agreement with Schroeder's SPD that neither party would name a candidate. The vote would fail and Koehler would have no choice but to dissolve parliament and call new elections as originally planned.

Nobody knows what happens next 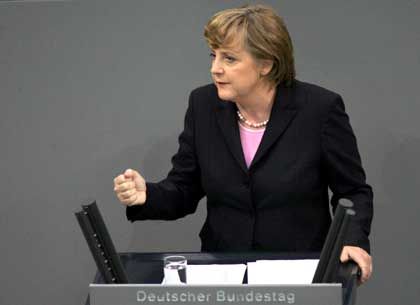 The SPD, however, says it wouldn't play along. In the case of such a parliamentary vote for chancellor, "we would put forward someone who the Social Democrats and the Greens would support," said a Schroeder advisor.

But that's a scenario the Greens say they would refuse to accept. The party's parliamentary group leader said last week that the almost universal calls for new elections could not be ignored.

If Koehler nixes Schroeder's petition, one theory which gets some currency in Berlin these days is that the chancellor could discreetly approach the opposition about creating a "grand coalition" of Christian and Social Democrats. Fat chance, say Union politicians, who claim they will instead seek a constitutional amendment allowing parliament to dissolve itself if it comes to this.

The bottom line is this: Nobody really knows what is going to happen in the next act of Germany's great political passion play of 2005. Indeed, Green renegade Schulz's potential legal complaint could even lead to the German high court blocking autumn elections even if the chancellor, the parliament and the president all agree they should be held.

But the lead role has been assigned. German President Horst Kohler has 18 days left to decide.

With reporting by Hartmut Palmer