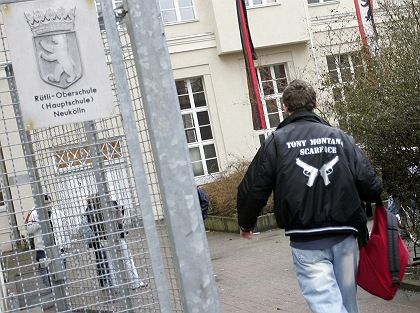 Anyone who's spent time in Berlin knows what a safe city it is. Sure, there's petty crime and occasional violence like in any big city, but compared to London or even the new cleaned-up, Disneyfied version of New York City, Germany's capital is a very peaceful place to live. That is, unless you happen to be teacher at the Rütli high school in Berlin's scruffy Neukölln neighborhood.

Last week, a letter from the school's faculty describing a complete breakdown of discipline and growing tendency towards violence by the students was made public. The situation had gotten so bad that some teachers refused to enter their classrooms without a mobile phone they could use to call for help if they were threatened. One Rütli teacher even told SPIEGEL that he often dreamed one of the out of control teens would "finally burn the place down" so he wouldn't have to face another day working there.

So what's life like at a Berlin school where 83 percent of the student body has a non-German background? The faculty letter describes an institution that appears to fail both its students and the teachers working there: "We must realize that the mood in some classes currently is marked by aggressiveness, disrespect, and ignorance towards adults  The tendency toward violence against property is growing  In most of the families of our students, they are the only ones getting up in the morning. For them, school is a stage and battleground for attention. The worst culprits become role models."

The letter created an immediate uproar across the country. How could this happen? The ensuing frenzy by the German media made the Rütli school sound like it could rival the worst inner-city schools in the United States. Police and metal detectors at the doors was the answer offered by a few pundits. Some politicians pointed to the extremely high percentage of students from immigrant families. Was it not evidence of Germany's failure to integrate foreigners and a warning against further immigration?

But the calls for prison-like security and the xenophobia-tinged scapegoating of foreigners completely miss the mark. If anything, the whole episode is more an indictment of an antiquated German school system that shunts students off into different academic tracks early on, as well as the country's inability to make many immigrants feel they are valued part of German society.

Neukölln is not South Central LA

To be sure, by German standards Neukölln might be a rough and tumble place. The Berlin district does struggle with widespread joblessness and a fair chunk of its non-German inhabitants are indeed marginalized from the rest of society. But the neighborhood and its schools certainly can't compare with downtown Detroit. No one is getting shot on a daily basis -- not at Rütli and not in the neighborhood -- and there is nothing of the kind of gang violence found in South Central Los Angeles.

The kids at the Rütli are without a doubt disrespectful, destructive and uncivilized. But such uncouth youths are a problem wherever apathetic and disengaged parents fail to care for their children. It would therefore be easy to chalk up the "scandal" about the school simply as another example of Germans talking down their own country. It's in fashion these days to complain about the decay of Germany's economy and society. Whether it's the country's chronically high unemployment, the inability to compete in a globalized world, or simply the poor state of German soccer, moaning and Cassandra-like panic has become something of a national pastime. But dismissing this as Teutonic malaise would be wrong for several reasons.

While not as bad as they are made out to be, Germany shouldn't wait until things get worse before it tackles the problems exposed by the Rütli school affair. If anything, this should serve as incentive for a long-overdue revamp of the German school system. Currently, high schools are broadly separated into three tracks: Gymnasium for university-bound students, Realschule for the less academically inclined, and Hauptschule -- vocational schools like Rütli -- that all too often end up being receptacles for problem kids from troubled homes. Germans have unfortunately long clung to this inflexible system which needlessly segregates children early on and frequently determines a person's later station in life. In Berlin, the children from many immigrant families are predictably more likely end up at a Hauptschule than Gymnasium. 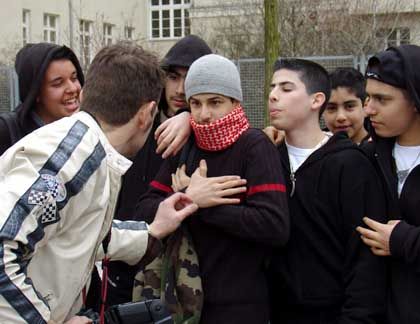 Around 83 percent of the students at the school have a non-German background.

And that leads to the next point: Although poor integration certainly doesn't help matters, the horror stories emanating from the Rütli school have less to do with immigration than with basic socio-economic problems. It wouldn't be hard to find a young black man born and raised in Detroit who feels just as marginalized in American society as a young Arab or Turk in Neukölln does in Germany. And there are most certainly a number of schools in economically depressed eastern Germany filled with just as many troubled German kids from failed households.

The outgoing principal at the Rütli school, Brigitte Pick, recognized that in a letter published on Monday in the Berlin daily newspaper Der Tagesspiegel. "The actual problem doesn't stem from the Arabic, Turkish or Serbian background of the students, but rather the lack of opportunities for them," she wrote. "The Hauptschule is only chosen by marginalized groups without a future and from students expelled from elsewhere."

Cem Özdemir, a Turkish-German member of the European Parliament, pointed out in a SPIEGEL ONLINE commentary last week that this has, in effect, exacerbated efforts to integrate foreigners into German society, since the children of immigrants and the children of middle-class Germans have very little contact with each other in the country's school system.

Of course, when parents no longer teach their children how to behave as civilized human beings, it makes it very difficult for teachers to do their job no matter how committed they are as educators. But this is a universal lament in nearly every modern society. Unless young men and women feel that they have both a stake in their society and a shot at a decent future in it, there is little a shocked and outraged nation can do to convince them otherwise.