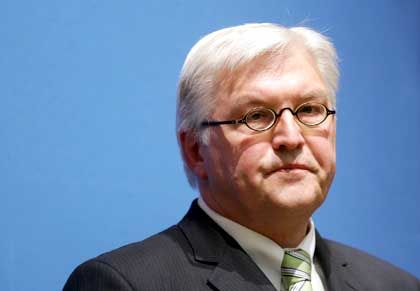 Visitors to Frank-Walter Steinmeier's office quickly notice he hasn't been Germany's foreign minister very long. With empty walls and a bare terracotta floor, he has yet to decorate properly. And if it were up to the opposition in parliament, he'd never get the chance.

Members of the Free Democrats (FDP), the Greens and the Left Party are all calling for Steinmeier's resignation amid allegations he was aware of active support by German intelligence agents for the United States war effort in Iraq while he was chief-of-staff of Gerhard Schröder's chancellery. On Tuesday, the opposition was preparing to vote for a special parliamentary investigation into reports that emerged last week detailing how Germany's foreign intelligence agency, the Bundesnachrichtendienst (BND), supplied Washington with information about potential targets for the American bombing campaign in April 2003.

The reports have been vehemently denied by both the BND and Steinmeier, who took over the Foreign Ministry in November as part of Chancellor Angela Merkel's grand coalition of Christian and Social Democrats. However, with Schröder no longer in power, Steinmeier has become a proxy for criticism over what appears to have been a wide discrepancy between the former government's public condemnation of the war and the seemingly close cooperation of German and American intelligence services.

Considering Schröder's center-left coalition of Social Democrats (SPD) and Greens was re-elected in 2002 in part due to its strong anti-war stance, the allegations could be particularly damaging to both the former chancellor's legacy and the current foreign minister's political future. Amid the sparse furnishings of his office, a visibly annoyed Steinmeier says the categorical opposition of the Schröder administration to the war in Iraq is now unfairly being twisted into some sort of complicity.

"We never said back then we were breaking off ties to the USA and were leaving NATO," says Steinmeier. "We just said we would not take part in this war."

So what was it? Hypocrisy at the highest levels or simply pragmatic realpolitik? Certainly, it would be naive to believe that just because Schröder refused to back US President George W. Bush's plans for invading Iraq that all military and intelligence ties between Berlin and Washington would be cut. But did Schröder lie to voters?

The most dramatic example of the alleged assistance may have been the April 7, 2003 attempt on the life of Iraqi dictator Saddam Hussein. According to ARD's Pentagon source, US intelligence received a tip that morning of a column of black Mercedes limousines near a restaurant often frequented by Saddam and other government leaders. It was thought that Saddam might be among the passengers. US officials reportedly called up German intelligence and asked them to have their agents do a drive-by of the restaurant. The German agents in Baghdad confirmed the existence of a convoy of armored vehicles outside the building and not long afterwards, four satellite-guided bombs obliterated the site.

But that claim has been forcefully denied by the current BND head, Ernst Uhrlau, who at the time was intelligence director at the chancellery. "That is wrong. Germany was not on the side of those waging war," Uhrlau says. "We did not supply the Americans with any target data."

Berlin did, however, inform Washington that it had two BND agents operating in Baghdad. And once the war began, the German spooks quickly became highly valuable to US intelligence officials. Several times the Americans asked the Germans to clarify important details, such as whether or not Saddam Hussein's claim was real that trenches around Baghdad had been filled with gasoline and would be set on fire as US forces approached. 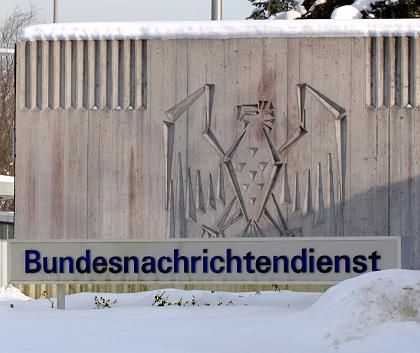 The BND headquarters in Pullach near Munich.

The official version of the activities of two BND agents is that they were in Baghdad to report on the progress of the war to Berlin. Any information given to the Americans was meant only to ensure that civilian buildings and allied structures such as embassies would not be not bombarded by US forces. Washington is still smarting from the accidental bombing of the Chinese embassy in Belgrade during the war in the Balkans.

All information was filtered via the BND headquarters in Pullach and at no time did Washington have direct contact to the two agents on the ground in Iraq. Behind the scenes, however, BND insiders admit that much of the information that flowed to their American counterparts at the time could have been useful to the militarily. In exchange, the Americans provided the Germans with classified details about planned military operations -- all valuable information for a German government that had been isolated by Washington because of its outspoken opposition to the war.

While the whole episode may seem like a tempest in a tea cup to observers in Washington, it could have serious repercussions for the government in Berlin. The potential impact of the affair surrounding the two BND agents has been magnified by recent revelations about several other incidents of dubious cooperation with the United States on highly controversial matters in the war on terror.

Sometimes that involved Berlin looking the other way while Washington bent the rules on human rights and sometimes the Americans simply misused German intelligence. The highest-profile case involved the CIA's reliance on an Iraqi BND source that German officials eventually told Langley was unreliable. Codenamed "Curveball," the man supplied information about Iraq's biological weapons program that was used as an important part of then US secretary of state Colin Powell's speech to the UN Security Council in Feb. 5, 2003. That speech was key in marshalling support for the coming US-invasion, but Curveball's information was later proven to be pure fabrication by a man who happened to be a chemist and was keen on receiving asylum in Germany.

Steinmeier will need to fight in the coming days if he is to keep his post at the foreign ministry while saving the anti-war reputation of the SPD and the legacy of former chancellor Schröder. For the moment, the foreign minister has the backing of Chancellor Merkel and top members of the SPD. However, a parliamentary inquiry could make his position untenable if more damaging revelations come to light.

The Greens, Schröder's junior coalition partner, seem especially keen to dig deeper since the scandal risks destroying the party's pacifistic credentials. "The accusations are so outrageous. Parliament has to react with its strongest weapon, the investigative committee," says the Greens parliamentary floor leader, Fritz Kuhn.

Germany's role in war on terror

The inquiry is likely to focus not only on the activities of the BND men in Baghdad, but also on the extent to which the previous government was involved in other controversial aspects of the Bush administration's war on terror. Several German parliamentarians are concerned about Berlin's passive participation in or tacit approval of the CIA policy of "extraordinary renditions," where terror suspects are abducted and taken to secret prisons in third countries for interrogation under dubious methods. They included the erroneous kidnapping of Khaled al-Masri, a German citizen of Lebanese descent. Also of concern are interrogations conducted by German intelligence agents abroad -- particularly in the case of Mohammed Haydar Zammar, a German terror suspect who has been locked in a Syrian prison for three years and may have been tortured.

The BND could also experience unwanted scrutiny of its activities. Since early 2003, German intelligence officials have participated in secret cooperation with other western spy agencies to hunt top terror suspects. At a facility named Camolin on the edge of Paris, the BND has worked with colleagues from the CIA, as well as French, British, Canadian and Austrian intelligence officials to exchange information and coordinate the global manhunt for al-Qaida members among others. Critics have pointed out that BND information could be used by US agencies that violate the very human rights standards Germany has committed itself to uphold.

And that could easily spark enough outrage in Berlin to ensure Steinmeier never gets the chance to hang a picture or two on the wall of his office in the Foreign Ministry.

Reported by the staff of Der Spiegel.