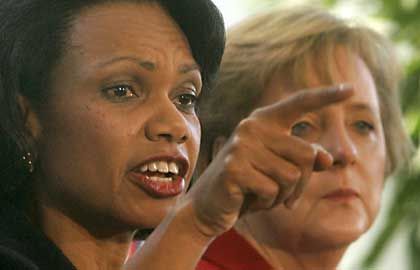 Condoleezza Rice's first visit to Berlin after German Chancellor Angela Merkel took office was originally intended to be a rather harmless and straightforward affair. Following the trans-Atlantic discord of the Gerhard Schröder era, Merkel has repeatedly said she wishes to make improving relations with Washington a priority of her new government.

But Tuesday's joint press conference by Rice and Merkel was never going to be the pleasant affair both women had probably hoped it would be. Growing German concerns -- more from the press and the public than the government -- about the actions of US intelligence agencies across Europe made the possibility of simple consultations and a happy photo op afterwards impossible.

Following weeks of increasing evidence that the CIA has been using several European airports as transit stations for flights with terror suspects aboard, pressure has been building for Berlin to clarify the scope Washington's so-called "extraordinary renditions" program. But in recent days it's become increasingly clear that both the current and previous German governments have been privy to what the spooks from Langley have been up to for years.

Specifically, former German interior minister Otto Schily was informed by the US ambassador to Berlin about the wrongful abduction by US intelligence services of a Lebanese-born German citizen, Khaled al-Masri. Detained in Macedonia, he was taken to a jail in Afghanistan and held for five months without evidence of any wrongdoing before being released.

Though Rice on Tuesday studiously avoided admitting that the United States was wrong to kidnap Masri, Washington was unwittingly outed by a seemingly careless Merkel. "We spoke about that one case and the US government accepted that it has made a mistake," Merkel said plainly, as Rice listened stony-faced to the English translation of her comments.

But that slip aside, US officials can generally be pleased with what Merkel said to the press corps in an extremely packed corner of Berlin's massive chancellery. As masses of journalists, photographers and TV crews all jockeyed for position, Germany's new chancellor made clear she was backing the way Washington is prosecuting its global war on terror. She spoke of "new threats" and "finding balance" between combating unconventional enemies and the laws and standards of free societies -- all very similar to the official Bush administration line.

"My foreign policy will have a very clear compass," Merkel said, explaining her intention to align Berlin closer with Washington.

If that appears like an abrupt shift compared to the sometimes seemingly anti-American course of her predecessor Schröder, it shouldn't. The revelations that Berlin kept quiet about the Masri case make clear that there has long been tacit approval of the methods used by the US intelligence communities.

On Tuesday, Rice justified using controversial measures to protect the citizens of both America and Europe from terrorism. "We will use any means to do so," Rice said, reiterating, however, that the United States would not condone torture or anything that contravened US or international law.

That the secretary of state is even forced repeatedly to assure the United States' friends and allies that the country does not violate the most basic human rights is the surest sign that Washington has long since lost the battle for hearts and minds of many Europeans. In Germany and elsewhere, America is simply no longer given the benefit of the doubt. 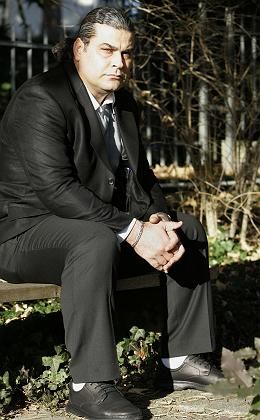 Of course, it would be naïve to think that intelligence agencies were not operating on the borders of western laws and norms. But the question worrying many on both sides of the Atlantic right now is just how far governments are willing to let covert operations go?

Merkel is hoping to deflect unwanted scrutiny about Berlin's silence on the Masri abduction by having her foreign minister, Frank-Walter Steinmeier, testify to a closed parliamentary committee about why Germany simply accepted the kidnapping of one of its own citizens. Steinmeier, who was chief of staff in Schröder's chancellery, was almost certainly informed about the rendition gone wrong.

Will it be enough? Many Germans are sure to be upset that there was less distance between Schröder's government and the Bush Administration than they had thought. And they may now begin to ask whether Merkel's compass is pointed in the right direction.