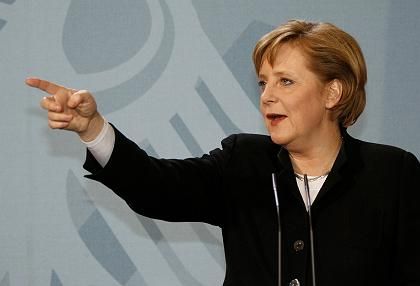 Pointing the way forward? Angela Merkel will have to make some tough choices in coming months.

The jab got plenty of laughs back then, but fast-forward almost a year later and Chancellor Merkel is the one chuckling three months into her term. While Schröder and Fischer are both political pensioners on the speech circuit, she has emerged from her first 100 days in office confident, poised and buoyant in the polls.

Back home though, Merkel has yet to establish much of a profile. Many painful economic reforms were promised during her campaign. But after years of obsessing about the need to turn Germany's social state around, both politicians and the public suddenly seem unconcerned. As a result, Merkel has suddenly become more popular than a prom queen. According to a recent survey by DER SPEIGEL, 75 percent of Germans now consider Merkel a capable leader and a whopping 85 percent support how she's doing on the job.

Those figures easily top approval ratings for both Schröder and Merkel's mentor Helmut Kohl after their first hundred days and are particularly striking considering only 27 percent of voters picked her conservative Christian Democrats in last fall's election. So what's Merkel's take on it all? Sticking to her decidedly understated style she'll only say she's "settled in well" in the chancellery.

There can often be a rocky transition period when a new administration takes over after an election. But for the most part, Merkel has indeed managed the transfer exceptionally well. And the bounce in her step is all the more remarkable considering her so-called "grand coalition" was never going to be a political love affair.

The conservative Christian Democrats (CDU), their Bavarian allies (CSU), and the center-left Social Democratic Party (SPD) were forced into bed together only because they couldn't cobble together their preferred governing constellations with other smaller parties.

Never one to inspire much passion -- especially after bumbling and mumbling her way through last year's election campaign -- few observers thought the new chancellor would able to connect with the public and keep her government from quickly descending into bickering and infighting. Cutting a good figure abroad and her popularity at home has helped weld the awkward right-left coalition together -- turning archenemies on the campaign trail into civil colleagues working together to get Germany back on track.

Of course, there can always be too much of a good thing. In this case, Merkel's rising star has begun to rankle many leading Social Democrats who fear the party is losing its profile as the SPD plays a subordinate role to the conservatives.

Peter Struck, the SPD parliamentary floor leader, couldn't have been blunter at a press conference this week in Berlin assessing the 100 day balance of the grand coalition. "The red carpet time for Ms. Merkel is over," he said, referring to her official visits in several world capitals. While his conservative counterparts were all smiles, he seemed downright glum. Now the chancellor would be faced with the unglamorous and potentially unpopular task of tackling Germany's mountain of domestic issues, Struck predicted.
Merkel will certainly face a rougher ride in the coming months. After talking a big game about the need for deep and perhaps painful reforms during the election campaign, she has studiously avoided attacking controversial issues that could either split the coalition or turn public opinion against her.

Beneath the sky-high opinion polls and gushing editorials about her foreign policy acumen, Merkel's first 100 days on the job could cynically be described quite succinctly: no expectations and no disappointment -- few words and fewer deeds.

That's a characterization the chancellor naturally rejects. "I can find anyway in which we've been slacking. You can't do the work of four years in a hundred days," Merkel told German SWR radio this week.

She's right, of course, that alleviating Germany's meager growth and overhauling its bloated social welfare system aren't things that can be done overnight. But her government has no time to lose: German unemployment remains stubbornly high and recently cracked 12 percent of the total workforce. If the grand coalition can't soon create the right conditions to make more jobs -- either by lowering labor costs or sparking domestic demand -- it will matter little how well she is received in Washington.

Her political honeymoon is over. Merkel will now have to show if her coalition truly is of the "grand" variety or simply a coalition of compromise. The soufflé, it would seem, is still in the oven.