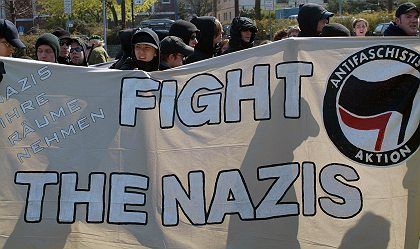 Right-wing extremism is on the rise in Germany. Clashes with anti-fascist groups are also increasing.

It's hardly the issue that Germany wanted to see in the headlines during the last few weeks before the World Cup kicks off in Munich on June 9. But stories on neo-Nazi violence, suddenly, are everywhere. On Monday, new figures showing a rise in right-wing violence in 2005 poured fuel on the fire.

German Interior Minister Wolfgang Schäuble said on Monday he was very worried about the steep rise in far-right crime and appealed to Germans never to look the other way when they see someone being attacked. "There mustn't be any no-go areas in Germany," he told a news conference at which he presented the 2005 report of the domestic intelligence service, the Bundesverfassungsschutz.

Schäuble said he wanted to expand police presence to deter attacks on foreigners and immigrants and said the authorities were determined to stamp out far-right violence. "That is why people can feel safe in our country," he said.

The total number of politically motivated right-wing crimes, though, rose 27 percent to 15,361, most of which related to far-right propaganda such as displaying the Nazi swastika, which is against the law in Germany.

The report's findings coincide with a debate about remarks last week by a former government spokesman who advised dark-skinned visitors to Germany to avoid eastern parts of the country such as Brandenburg, the state that surrounds Berlin.

"There are small and medium-sized towns in Brandenburg, as well as elsewhere, which I would advise a visitor of another skin colour to avoid going to," said Uwe-Karsten Heye, who now leads an anti-racism organization called "Show Your Color." "It is possible he wouldn't get out alive."

Heye has a point -- according to regional intelligence reports, the risk of falling victim to a far-right attack is almost 10 times higher in Brandenburg than it is in the western state of Hesse, for example. In the eastern state of Saxony-Anhalt, the risk is 12 times greater than in Hesse.

But several politicians have warned that Heye's comments could backfire because he has effectively acknowledged that neo-Nazis are succeeding with their strategy to create "foreigner-free zones".

Is the far-right winning?

Wolfgang Wiegand, a member of the opposition Greens party, said right-wing extremists may interpret Heye's remarks as meaning "they have won." Wolfgang Thierse, an eastern German member of parliament, said "stigmatizing" a whole region of Germany would discourage local citizens from tackling the far right.

Heye's remarks were prompted by recent racist attacks that have hurt Germany's bid to project a cosmopolitan image for the World Cup. In the latest incident on Friday night, a German politician of Turkish origin -- who is a member of the Berlin local assembly -- was hit over the head with a bottle by two unknown assailants in Berlin's eastern Lichtenberg district.

Giyasettin Sayan, 56, immigration spokesman for the Left Party, is being treated in hospital for a concussion. He told local television that one of the attackers said "You Turkish shit, we'll get you."

Meanwhile, neo-Nazis have been using the Internet to call for a demonstration on June 21 in Leipzig ahead of the World Cup match being played there between Iran and Angola. Their aim is to support Iranian President Mahmoud Ahmadinejad who has described the Holocaust as a "lie" and wants Israel to be wiped off the map.

The Union of Police Officers has appealed to courts to forbid all demonstrations near World Cup stadiums during the tournament. "During the World Cup the police won't have the manpower to secure such events," said the union's chairman, Konrad Freiberg.

Labor Minister Franz Müntefering called for anti-Nazi demonstrations, saying: "We will make unmistakably clear that no one in Germany needs to be afraid because he has a different skin color or a different name or a different origin."